Truck drivers, railway workers and other blue-collar workers are bearing the brunt of his trade policies 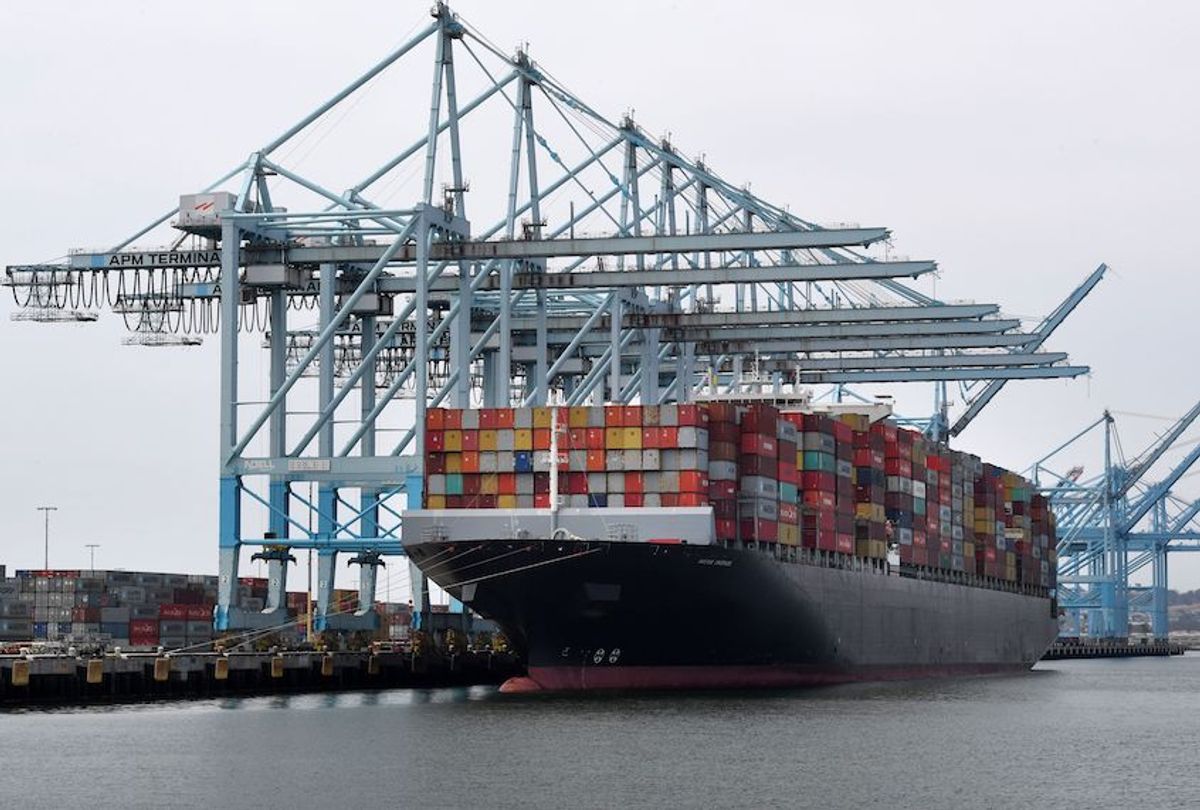 Shipping containers are unloaded at the Port of Los Angeles in Long Beach, California on May 14, 2019. (Mark Ralston/AFP/Getty Images)
--

The poorly educated are about to learn just how little Donald Trump loves them. His gratuitous trade mayhem is damaging the global economy.

That means workers in jobs requiring no more than a high school diploma may soon get let go from jobs moving goods. Longshoremen, railroad workers, teamsters, the lumpers who load trailers, warehouse workers, and retail clerks are all at risk of being forced into unemployment.

Will these millions of workers grasp that Trump is abusing them to satisfy his whims? Or will they react more like battered spouses who keep returning for more abuse because they cannot see the harsh reality of their situation?

During the 2016 primary races, Trump declared “I love the poorly educated.” At rally after rally he used the word “love” to sell the idea that he would champion what he later called the “forgotten man.”

As we have documented again and again at DCReport.org, Team Trump’s actions worsen the safety, health and long term financial interests of workers, while being a lucrative boon to polluters and financial predators.

It was easy for Trump, the most successful con artist in history, to trick the poorly educated. Trade is a complex issue whose costs and benefits keep economics professors with doctoral degrees busy debating.

No one reasonably expects people with a General Education Development (GED) certificate or a high school diploma to grasp what Trump clearly doesn’t understand: when a worker in Shanghai loses her job, it may cost a worker in Shreveport hers.

Like it or not, we live in a global economy with complex supply chains that make all those in major economies dependent on one another. Smart diplomacy can improve the global trade rules, but tariffs and tirades cannot.

Trump’s tariffs are expected to cost American households an average of $831 this year.

Trump’s rash move on Friday, Aug. 23, to increase tariffs and apply them to even more Chinese goods, taken in response to retaliatory Chinese tariffs on American goods, is likely to push that cost well above $1,000 per American household.

That’s a lot of money for the poorly educated — more than a week’s gross pay. Our federal government estimates typical truck driver pay at $44,000, though typical pay is significantly lower in Southern states (and Idaho), that went for Trump in 2016. Retail sales clerks typically make only $24,340.

Exposing his own ignorance, and clearly hoping that the poorly educated can be fooled again, Trump keeps saying that China is paying the tariffs. In fact, as anyone who has taken a single college economics course knows, a tariff is a tax on consumers, so it is Americans who pay, not the Chinese.

Since America buys only one-fifth of China’s exports, the damage from Trump’s trade mayhem will hurt Americans in trade-related jobs more than the Chinese.

China, to be sure, is hurting because of the Trump trade mayhem. Chinese factory activity began declining in May. But contrast that with America, where 14 months ago orders for goods for export began declining.

Americans who vote have the power to decide who makes the rules they must live by, while the Chinese are vassals of a brutal communist dictatorship that does not hesitate to massacre its own people when necessary to maintain its power. That means President Xi and his team can make their people endure for as long as it takes to prevail in Trump’s trade war.

China has fallen this year from first place to third as an American trading partner. Mexico is now first in goods, Canada second. China trade is down about 10%, compared to the first half of 2018.

The decline in trade with China means fewer ships crossing the Pacific laden with goods. That, in turn, means in the months ahead fewer jobs moving cargo at seaports, at railroads, at trucking firms and, eventually, at retail stores.

American rail freight traffic is down about 3% through mid-August and, revealingly, down 5% for the most recent week, according to the American Association of Railroads. Canadian traffic, however, is up 2%.

California’s Long Beach Port is a key indicator of foreign goods trade. The number of arriving cargo containers was down 10% from a year earlier, the lowest July import volume since 2014.

The Port of Los Angeles shows increased container shipments this year, but is down 12.4% from 2017, another indicator of Trump’s trade mayhem.

Then there are orders for new big rig trucks, known as Class 8 trucks, an indicator of expected trucking volume in 2020 and beyond. Class 8 sales this year have collapsed, down 81% by one measure. That means workers who build big rigs and diesel engines may face layoffs starting later this year.

By deferring new truck purchases, trucking company owners reduce their risk of bankruptcy in a recession, which may already have started.

The global economic slowdown has also hit Germany, which had been the main engine of European Union activity. A telling perspective on what is coming emerged in a recent conference call between Stuttgart-based executives of Daimler, famous for its luxury Mercedes-Benz cars, and stock market analysts.

Daimler revealed a 70% drop in orders for new trucks in North America, which overwhelmingly means the United States.

Ola Källenius, the CEO of Daimler, told stock analysts in July about where future growth lies. He cited Brazil, adding “we believe in long-term growth in China. It’s one of the main pillars of our market growth strategy in the long-term. So, China, for us is important and it’s a market that will continue to invest in and also gradually increase our production capacity.”

And what about the United States?  “The 2020 numbers in North America will be lower than 2019 numbers,” said Martin Daum, the Daimler executive in charge of truck and bus manufacturing.

The questions we need to ask ourselves? Will the poorly educated grasp that Trump’s trade mayhem is the sand tearing up the gears of world commerce or will he trick them, again, into believing that he alone can solve their pocketbook problems? And how do we educate these voters?