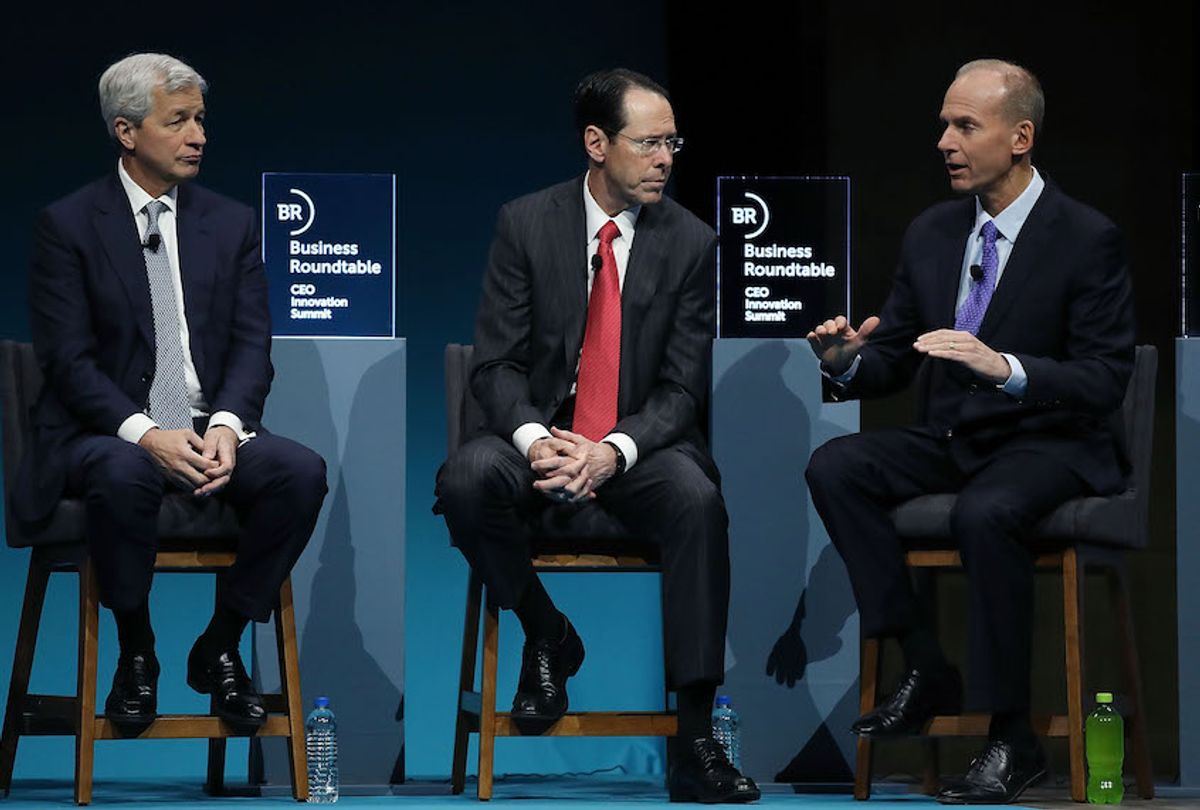 A business group that represents the CEOs of America’s most powerful companies recently
issued a statement that may sound like a roar.

But it’s actually more of a whimper.

For decades, the Business Roundtable has maintained that the primary purpose of a corporation is to provide returns for its shareholders. The Roundtable — which represents 193 companies with over US$7 trillion in revenue and almost 15 million employees — now says that corporations “share a fundamental commitment to all of our stakeholders,” including employees, communities and suppliers.

This is a big symbolic win, but it is unlikely to change how companies — even those that signed, such as Amazon, Boeing and Pfizer — actually behave. Ultimately, only shareholders have an actual seat at the table and can vote on who runs the company.

As an adviser to corporate managers, I have spent countless hours listening to executives discussing what shareholders want. I haven’t heard more than 20 minutes of talk about what employees, communities or suppliers need or deserve.

A statement from a group of CEOs, no matter how powerful, won’t fundamentally change how they operate. But there’s one thing that will.

A symbolic change of tune

The idea of shareholder primacy first emerged in a 1932 Harvard Law Review article by Adolphe Berle, a Columbia University law professor who served on President Franklin Roosevelt’s “Brain Trust.” Berle said “all powers granted to a corporation or to the management of a corporation … [are] at all times exercisable only for the ratable benefit of the shareholders.”

Until now, that was essentially the position of the Business Roundtable, which was founded in 1972. In a 1997 “Statement on Corporate Governance,” for example, the Roundtable said “the principal objective of a business enterprise is to generate economic returns to its owners.”

But on Aug. 19, the Roundtable changed its tune. The 182 CEOs who signed the statement said they are committed to not only generating long-term value for shareholders but also:

The new commitments represent a symbolic victory for those who want companies to consider the interests of not just its shareholders but of other groups that are affected by corporate behavior. The statement signals this view is now Corporate America’s as well.

But in practice, the statement doesn’t really amount to much.

The purpose of a corporation

First of all, the Roundtable doesn’t actually have the power to define the purposes of corporations or the duties of managers who run them. Those duties are a matter of corporate law.

Corporate law states that the “business and affairs of every corporation … shall be managed by or under the direction of a board of directors.” And these directors in turn owe fiduciary duties of care and loyalty to the corporation and its stockholders — no one else.

CEOs cannot alter these legal duties by signing a statement. The Roundtable is neither a state legislature nor a supreme court, so its statement doesn’t change the law.

More to the point, the law doesn’t need changing in order for companies to be able to do “good.” That is, even though the law creates a specific duty to shareholders, it doesn’t prevent companies from considering the interests of other groups.

No law requires companies to maximize shareholder returns by paying employees the minimum necessary to keep them on the job. No law requires managers to treat suppliers unfairly, disrespect the communities in which they work or to shun sustainable practices — if doing so will yield higher returns for shareholders.

The law is even more expansive than the Roundtable statement. No law forbids corporations from taking money that could have gone to shareholders and donating it to hospitals or museums.

In fact, the only time companies have to exclusively focus of maximizing shareholder value is when selling the company. Otherwise, they are free to do many things that benefit people who are not shareholders.

For decades the Roundtable has touted the efforts of its members in supporting the environment, their workers and their communities. It didn’t take a statement to incite those efforts. It took changes of heart — or, perhaps more often, public pressure.

If you think some or most companies are behaving badly, the Business Roundtable’s statement shouldn’t lift your hopes that their behavior will get any better. Shareholders will remain primary.

But at least these companies recognize that people expect a lot more from them. That’s what is forcing change.