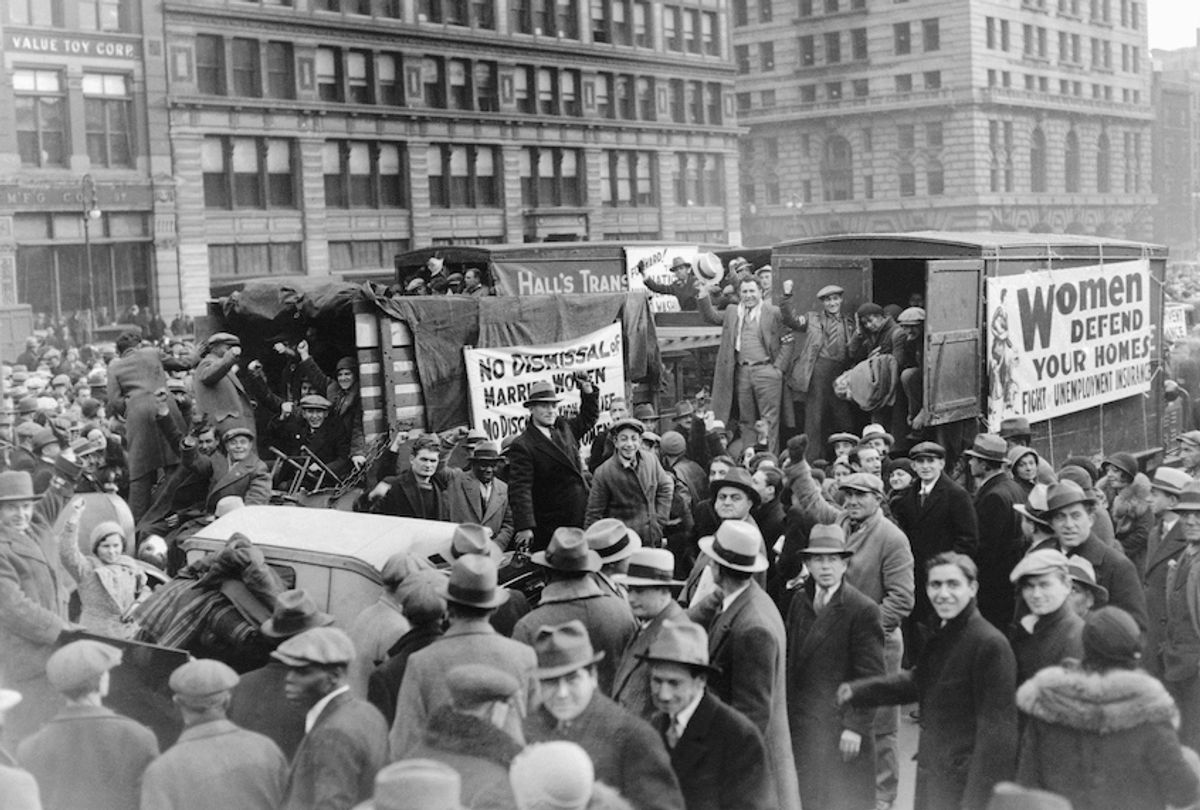 Public space is an essential component of democratic cities. Modelled on the agora of ancient Greece, it is a marketplace for the exchange of goods and ideas, a place where public affairs are debated and disputes resolved.

But historically, access was restricted. Famously, the classical agora was open only to the “free-born” and closed to women and slaves. Throughout history, just as access to public space is contentious, so are the rights of citizenship.

Union Square in New York is an important site in American labor history. In Design for the Crowd: Patriotism and Protest in Union Square, published this month, I explore how the history of this square, small in size but large in political importance, illustrates the shifting meanings and inherent tensions of public space as an epicenter of civic life.

Even in liberal democratic societies, the right to appear in public is mediated, dependent on local social, political and legal convention. In the U.S., for example, although freedom of speech and freedom of assembly are enshrined in the 18th-century Constitution, it wasn’t until the early 20th century that those freedoms were fully recognized in law.

Nearly 150 years ago, a modest park in the middle of New York City helped effect that change.

The 19th-century American landscape architect Frederick Law Olmsted is best known for Central Park, often referred to as a “democratic landscape.” Exploiting the natural features of its craggy site, it was designed as a city wilderness, a place of respite from the stresses of urban life intended for use by all New Yorkers.

But few know that Olmsted was also involved with the renovation of Union Square Park, two miles to the south. Smaller and more traditional in its design, this park was a democratic landscape in a different sense – a modern plaza for public meetings.

Early in the 20th century, contentious political rallies held in the plaza helped progressive social reformers argue for the legal protection of freedom of speech and freedom of assembly.

Union Square was not planned as a public space in the political sense: enclosed by an iron fence, it was an amenity for the elite residents who lived close by.

The square gained a reputation as a site for political rallies during the Civil War. Following the Confederate attack on Fort Sumter in 1861, thousands of New Yorkers gathered around the park’s statue of George Washington for a demonstration urging national unity.

This statue, depicting Washington on horseback, was modelled on the classical statue of Emperor Marcus Aurelius in Rome. At the end of the war, the citizens of New York raised funds for a matching statue of Abraham Lincoln, depicting him holding a copy of the Emancipation Proclamation. As Union Square transformed from a residential neighbourhood to a busy commercial centre, these statues became popular focal points for public meetings.

In 1872, Olmsted and his partner Calvert Vaux redesigned Union Square. They tore down the fence, rejecting the focus on heroic figures and introducing instead a modern American version of the agora.

While the statues of Washington and Lincoln commemorated the military and political triumphs of the past, Olmsted and Vaux’s plaza was designed to facilitate democracy as an ongoing and active process.

Union Square became the place where working class New Yorkers, many of them recent immigrants, met to demand access to the benefits of American citizenship. Located between the sweatshops of Lower Manhattan and the department stores of Ladies’ Mile, it was the site of boisterous labor meetings, including the first Labor Day parade in 1882. The plaza became the place where the city’s emerging industrial working class demonstrated its political strength.

The unity and common purpose that characterized the first Labor Day parade did not last. Within a decade, radical groups splintered away from the mainstream wing of the labor movement. From 1890, socialists and anarchists began a new tradition, the celebration of May Day – and as this grew, Union Square acquired a reputation as a forum for anti-American ideas.

By the early 1890s, the mass rallies that regularly occurred at Union Square seemed to foreshadow complete social disintegration. In 1893, the anarchist Emma Goldman was arrested and charged with inciting a riot following an address to a mass meeting of the unemployed. Her trial was a national sensation.

In his defense, her lawyer Abraham Oakey Hall argued that Goldman had committed no crime. He quoted the section of the penal code that allowed for “peaceable assemblage of lawful purposes of protest and petition”. Though unsuccessful, this defense helped promote a new interpretation of the rights to freedom of speech guaranteed in the First Amendment.

Goldman found little sympathy among the general population. However, her arrest fostered an alliance among radical political groups, labor organisations and progressive social reformers, leading to the formation of the non-partisan Free Speech League.

Prompted by Olmsted’s redesign, which offered New Yorkers a new kind of forum, political meetings held at Union Square helped change judicial opinion. After the turn of the 20th century, these meetings became key tests for the free speech movement, with liberal commentators decrying the suppression of political speech as a violation of the fundamental rights of American citizens.

Influenced by a progressive municipal administration, the police and the Parks Departments were increasingly protective of peaceful political rallies in the early 1900s.