Wake up, America: The dream is dead. Not just for "Dreamers," but for all of us

One DACA recipient has decided to "self-deport" — to Canada. More will follow, and that should tell us something 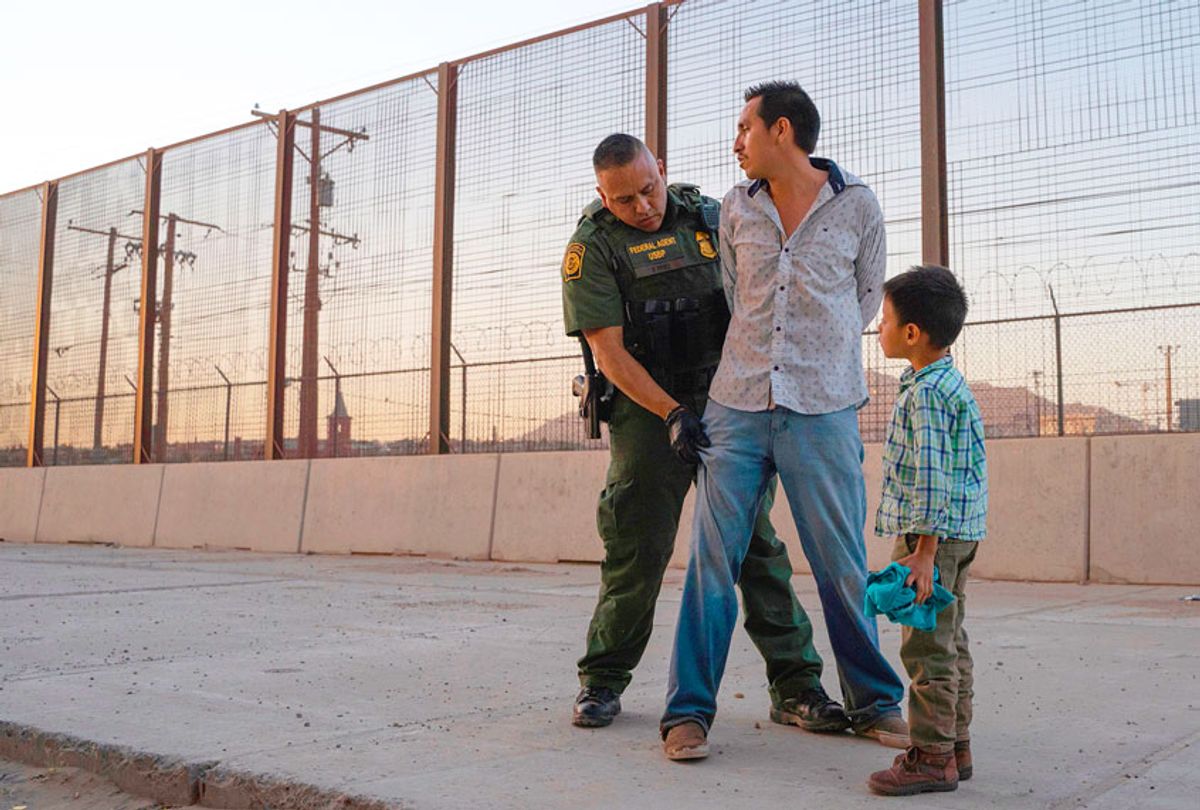 A shorter version of this article originally appeared at Common Dreams.

It is a truism that whatever starts off hurting immigrants eventually harms us all. On the other hand, if something benefits immigrants that too ends up helping all of us. When xenophobia hits a nation, this basic principle is forgotten, as a false us-versus-them dichotomy takes hold. A disturbing aspect of American exceptionalism is that this dichotomy keeps being presented as something virtuous; the veneer of exceptionalism blinds us to our common interest and is now breeding the intense storm of resentment that is ostensibly targeted toward immigrants but is actually a reflection of deep self-hatred.

In her important op-ed for the New York Times on Aug. 13, a DACA recipient (aka "Dreamer") named Tawheeda Wahabzada, whose Afghan parents had earlier sought refuge in Canada but then came to the U.S., declares that she is no longer willing to wait for our country’s legislative bodies to do something to help people like her out of the perpetual limbo, and that she’d rather “self-deport” back to Canada, the country of her birth.

She is 29 already, and there’s no end in sight to her existential crisis, which she now finds intolerable. Should she wait another five or 10 years to get a driver’s license, to pay taxes, to rent a place, to do all the things a citizen takes for granted as part of normal life? Should she continue to put her life on indefinite hold? Or should she accede to the demand made by white xenophobes, led by Donald Trump and his repulsive lieutenants like Stephen Miller, Julie Kirchner, and Kris Kobach, and cease to be part of this nation’s fabric?

Her decision is all the more fraught with sadness for her because she is a model of the American Dream judged on its own terms, according to scholastic, cultural and political accomplishments; and yet there is no path to legality open to her, and no conceivable hope on the horizon that one might reveal itself.

I completely sympathize with her decision. Wahabzada is able to return to Canada, a country much better off than ours in numerous respects (as many of the commenters to her op-ed have noted), though if she were to have to return to Afghanistan, just about the most challenging country one might imagine for someone of her background, I would be even more supportive.

I speak as someone who believes in completely open borders, to a degree far greater than any of the current Democratic Party contenders, including Bernie Sanders, Elizabeth Warren, Julián Castro or Beto O’Rourke, are willing to concede. Migration, during the course of this century, will come to be recognized as a fundamental human right, like education and health care. Unfortunately, even the most progressive candidates in this cycle speak for “comprehensive immigration reform,” which has generally been code for a grand bargain which takes away a lot of migrant rights in return for much fewer concessions.

And yet, despite my strong belief in open borders around the world, and despite all my sympathies lying with every kind of migrant (I don’t make the false distinction between legal and illegal, because our bureaucracy doesn’t function in a way to allow for such an unsustainable differentiation), I would rather that Wahabzada not stay here. Though it is always excruciating to leave a country one has gotten used to, I believe she’d be better off exiting this schlock-spectacle of a collapsing empire and whatever unspeakable misfortunes are to befall it over the coming decades as we approach the end.

The Democrats, under Barack Obama, had near-complete control over the federal government for a while, including almost a filibuster-proof Senate majority, and could easily have passed a humane immigration law, legalizing everyone with roots in the country, at a moment of great economic crisis when the window of opportunity existed. Instead, they preferred to stall young and old migrants alike and to kick them around as political footballs for as long as possible. When the 2012 election looked like it might be in danger from a revolt of the minorities, they came up with a stopgap measure for a small segment of idealized migrants in need of help, namely the Dreamers, and in the process set up a tragic division between Dreamers and other types of migrants and refugees and asylum seekers.

It was a quintessential neoliberal ploy. Instead of a universal law helping everyone, they divided according to qualifications and criteria that were ever-shifting and subject to interpretation, which meant breeding more chaos into the system, more inefficiency and injustice, all very much by design. And now, with Trump, even the dream of an attenuated Dreamer-oriented law, as Wahabzada clearly recognizes, is dead. Nancy Pelosi and Chuck Schumer would rather have the issue of unauthorized migration with us forever, because if they were sincere about solving the problem how would they leverage vulnerable constituencies for votes?

Between the lines of Wahabzada’s self-critical essay one can detect the funeral notes of an American exceptionalism she no longer believes in — and rightly so. Many Americans might not be aware of it, but the problem Wahabzada identifies far exceeds that of Dreamers: It affects every migrant to some degree or another, in this post-Enlightenment phase of the American immigration ritual, torn apart by an obscene respect for wealth and slavish obedience, rather than independence of spirit. Also, what many Americans might not yet realize is that a reverse brain drain has already been going on for some 15 years, not only in the direction of Canada and Europe, but more remote countries of origin as well — a very welcome development. Finally, one hears again and again from Dreamers, despite the Democrats’ vulgar separation between them and their parents and families, that they’d rather not take the humiliating deal which saves them but sacrifices their parents.

But the emotional purge must extend beyond any political party’s dereliction. In post-liberal America, failure is often defined as success and vice versa. Wahabzada holds a master’s degree in global policy studies from the Lyndon B. Johnson school at the University of Texas in Austin, and the nonprofit she has worked for, Open Data Watch, which helps countries manage and improve official statistics, contains in its very name the contradiction of relying on quantification, once the enemy of individualism, to help accomplish nonquantifiable goals.

For a young person from Bangladesh or Egypt today, what does it mean to come to America? If it’s to lay claim to a prestigious profession like engineering or medicine, who will benefit, and how far removed is the “successful” profession from liberal foundations? Broad humanistic study — once quaintly called “liberal education” — has been cut off at its roots because of the high cost of maintaining empire at this late stage.

Education is supposed to empower, but it actually impoverishes. This may not apply to Wahabzada herself, or perhaps it might at a later stage of her freedom, but we should ask the question of how we define helping others: Can it be accomplished by data-driven enterprises mired in all the parochialisms of contemporary social science? How can we measure the value of an individual teaching a poor child in Afghanistan or Pakistan as a spontaneous activity, compared to the technocratic frenzy of hyper-accomplishment American students are programmed to follow if they are to be blessed with the official imprimatur of virtue?

The ironies, for Wahabzada and others like her, don’t stop there. How does one fight for freedom from the headquarters of the worst human rights violator, all across the globe, for the last 70 years? This includes, of course, Afghanistan, Wahabzada’s ancestral country, which was serially devastated after not one but two prolonged U.S.-sponsored wars, one against international communism and the second against international terrorism.

The American empire, pretending as always to be looking out for human rights and venturing “accidentally” into unfortunate misadventures costing innocent colonial lives, is defiled by the same hypocrisy at its core as the American Dream, which is the hollowest known interpretation of what constitutes human happiness. It is not that the American Dream needs to be pursued elsewhere, but that the American Dream is itself at fault. Its realization signals capitulation, whereas having to face continual obstacles might well signify residual humanity in the aspirant.

By appropriating the term “self-deportation,” Wahabzada recognizes the grotesque parody of agency she partakes in. She is well aware of its psychological ramifications, for herself and for her auditors. The “self” in deportation has a history as old as slavery, Indian removal, Jim Crow and 20th-century internal migrations. It is the obscured counterpart to government-orchestrated mass removals, leaving it up to states or municipalities or private actors, to enforce a regime of “choke points” so unbearable that the migrant chooses to terminate life as he or she knows it.

The term in its modern usage likely originated with a pair of Mexican-American satirists reacting to California’s Proposition 187, which would have denied education and other services to migrants; then-Gov. Pete Wilson soon borrowed it with the irony removed. When commentators acted surprised by Mitt Romney’s solution of self-deportation in 2012, they ignored the slew of sub-federal laws enacted all throughout the 2000s to make life so unbearable for migrants that they voluntarily chose the final solution. Of course there is nothing voluntary about any of this, as we can tell by the rise of the term “voluntary departure” (which is considered a privilege granted to the immigrant), as the other side of the term “expedited removal,” which came into currency with Bill Clinton’s passage of the draconian 1996 anti-immigrant law establishing many new categories of inadmissibility.

Wahabzada well realizes the strong demonstration effect of her publicized auto-da-fé, as I am aware of my own much smaller act of enhancement of her self-immolation, which is all very much part of the subterfuge of agency suggested by the term. It is not that Stephen Miller needs to be educated about the history of his own ancestors escaping anti-Jewish pogroms in Russia at the turn of the last century, but that there’s no amount of conformity that will qualify the excluded, regardless of cultural excellence. The same applies to Trump, whose current wife worked illegally before finagling her way into legality by way of the extraordinary ability (genius) visa, and who then brought over her family in what is now derided as chain migration, all without making any visible contributions. The demonstration effect on the border, where most of our attention remains focused on child separations, makes continuous self-deportation by those in possession of this grotesque agency invisible, because they are mostly poorer and have no public voice.

Despite all this, I applaud Wahabzada for what I hope are her first steps toward liberation, and I wish there were more like her. I wish youth, when it has its chances, would always have the foresight to reframe a problem of contingency as one of opportunity. America is not the only claimant to the dream anymore. It is not even one of the last ones. For many, the dream has become a nightmare, but there is yet a passage through the difficult terrain which might perhaps take us to a different kind of dream, because this one sure is extinct. It is a great step forward to recognize this and move ahead. That is the last best hope of mankind.