How can Sweden be a peace broker if it’s also selling the arms that make the war in Yemen possible?

On August 13, TV4 in Sweden reported that Swedish weapons have been used in Yemen 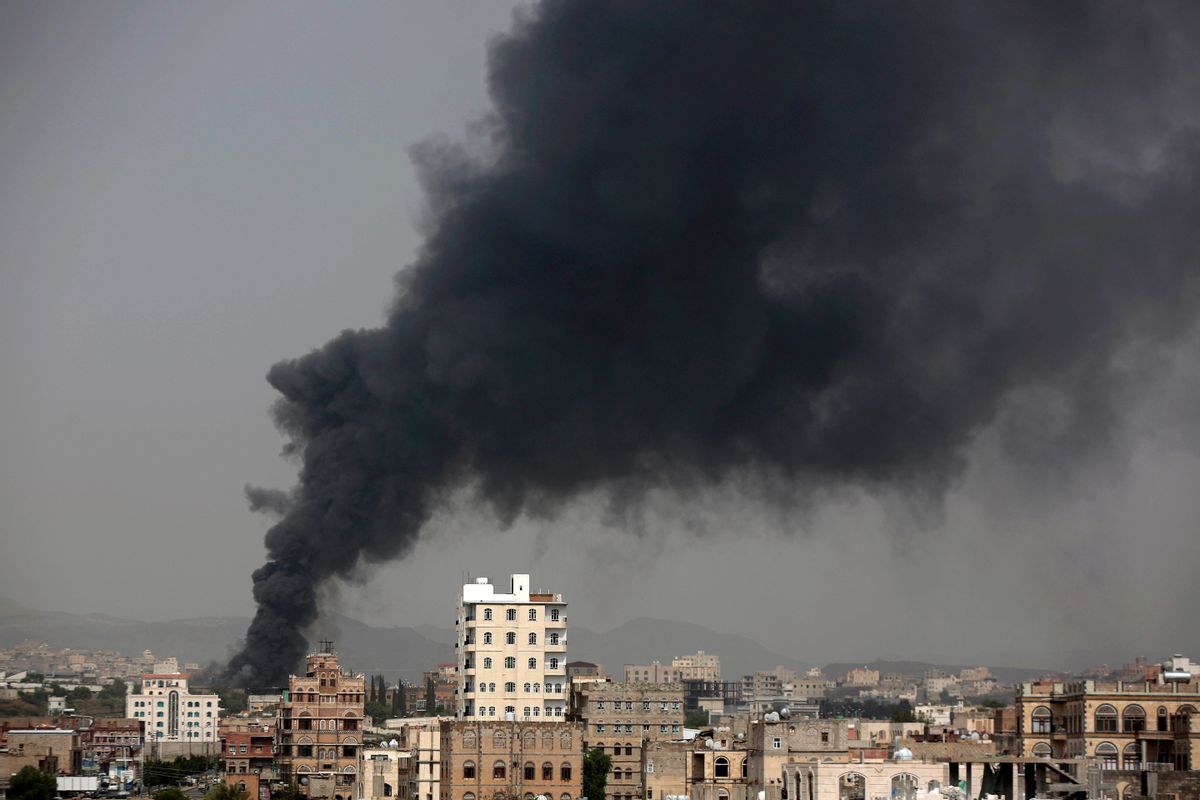 In this Aug. 9, 2016 photo, smoke rises after Saudi-led airstrikes hit a food factory in Sanaa, Yemen. In the air campaign by Saudi Arabia and its allies against Yemen’s Shiite rebels, rights experts say there has been a pattern by the Saudi-led coalition in depending on faulty intelligence, failing to distinguish between civilian and military targets and disregarding the likelihood of civilian casualties. Experts say some of the strikes likely amount to war crimes. (AP Photo/Hani Mohammed) (AP)
--

On September 1, bombers struck Dhamar Community College in Dhamar City, which is in Yemen’s southwest. The college has not enrolled students in many years, and its buildings have been used instead as a prison. On the day of the bombing, the buildings held 185 prisoners. The prison held mostly people who were to be exchanged with the government of Abdrabbuh Mansur Hadi. The Houthi movement, which controls Dhamar, say that they had informed the International Committee of the Red Cross of the prison’s location. The bombers are likely from Saudi Arabia, which has been bombing Yemen since the start of its war in 2015. The Yemen Data Project has found that at least a third of Saudi bombings are of civilian targets.

A spokesman for the Houthi movement’s minister of health, Yusuf al-Hadri, says that there are between 60 and 100 dead. The Saudi aircraft kept hitting the site, making both rescue difficult and the carnage extreme.

When news of the bombing reached Lise Grande, the UN Humanitarian Coordinator in Yemen, she responded that this was a “staggering” and “horrific incident.” “These are very dark times for Yemen,” said Grande, who had spent several years in Iraq where she saw other horrific and staggering incidents. But Yemen is a case apart. It is, as the UN says, the worst humanitarian crisis. A few days before this bombing, Grande had said that the situation in Yemen is “very fragile.” An unbelievable 80 percent of the 28.25 million Yemenis — 24.1 million of them — are in dire need of assistance.

For the past four years, the UN officials have said the same things. People like Grande — all deeply sincere — have pleaded for aid for a population holding on to reality with its fingernails. Meanwhile, on the political side, special envoys of the secretary-general like Martin Griffiths call the parties to the table and ask for the resumption of negotiations. After this particular bombing, Griffiths said, “The human cost of this war is unbearable. We need it to stop.”

This was a breakthrough agreement, since it saw some movement on peace talks that had been stalled for many years. The agreement can be understood to be in three parts — an agreement that the crucial Hodeidah port be kept open and not be a point of conflict, an agreement on the creation of humanitarian corridors to allow aid to move from Hodeidah to the interior of Yemen, and an agreement to swap prisoners. The prisoners at Dhamar Community College were part of the prison swap.

The agreement simply had not held. Since December, over 30,000 people have been displaced from Hodeidah, and fighting in the port city has intensified. The promise of the humanitarian corridors has not been met, as more than 5 million Yemenis remain outside the reach of the aid agencies. Good faith between the two sides inside Yemen is limited, while the Saudi-UAE coalition continues to bomb the country. By March 2019, the situation seemed so dangerous that five of the ambassadors to Yemen from five permanent members of the UN Security Council said that they were extremely concerned about the situation. They were not taken seriously.

The politics here are intractable. Saudi Arabia backs the government of Hadi, who is not trusted by the United Arab Emirates — the Saudi ally — because the UAE sees Hadi as part of the Muslim Brotherhood movement (the Brotherhood is banned in the UAE). Saudi Arabia, meanwhile, will not do a deal with the Houthis because it sees them as an Iranian proxy. Furthermore, Saudi Arabia has staked its prestige on this endless war. Neither Hadi nor the Houthis are able to develop a patriotic Yemeni view of the situation and come together against the bombing. The discussion in Sweden, then, had little genuine basis. It was fated to fail.

After this Sunday’s bombing, Sweden’s Foreign Minister Wallström said that she will travel to Yemen and “speak with as many people as possible.” This is valiant. Wallström is an honorable person, whose credentials for both seriousness and balance were affirmed in 2016 when she criticized Israel for its policy of extrajudicial killings. But in this case, Wallström will have to do more than go to Yemen and try to talk to everyone.

In March, the Stockholm International Peace Research Institute released its annual report on arms sales. It showed that Sweden has reduced its arms sales by 62 percent since 2009. Sweden remains the 15th largest arms exporter in the world, but this is far behind the major exporters (led by the United States).

Svenska Freds, Sweden’s venerable anti-war group, says that Saudi Arabia has been buying Swedish weapons since 1998. Sweden’s main arms sales to Saudi Arabia have occurred over the past decade, while Sweden has also been selling arms to the UAE. Sweden’s arms manufacturer — Saab — opened an office in Abu Dhabi in 2017. There is no sign of a slowdown in this arms sales relationship.

Sweden is not alone in this. The UK and other European countries, as well as the United States, have been selling arms to Saudi Arabia and the UAE. But, unlike Sweden, parliamentarians in both Italy and the United Kingdom have tabled bills in their respective parliaments on this sensitive and important issue. Neither the UK nor Italy is attempting to be an honest broker in Yemen.

If Wallström, and Sweden, are to be taken seriously in Yemen, they have to ban the sale of arms to both Saudi Arabia and the UAE, and Sweden has to take leadership in Europe to end arms sales to these two belligerent powers.

It is not enough to be moved by the tragedy in Yemen. Action is necessary. Wallström’s journey to Yemen is commendable, but it would be more credible if Sweden banned weapons sales to Saudi Arabia and the UAE. Short of that, this is another European project reminiscent of the Oslo Accords that made Europeans feel good at the same time as Europe’s weapons sales deepen the conditions of tragedy.