Two New York cops arrested a young woman and had sex with her in an unmarked car. They're not going to prison 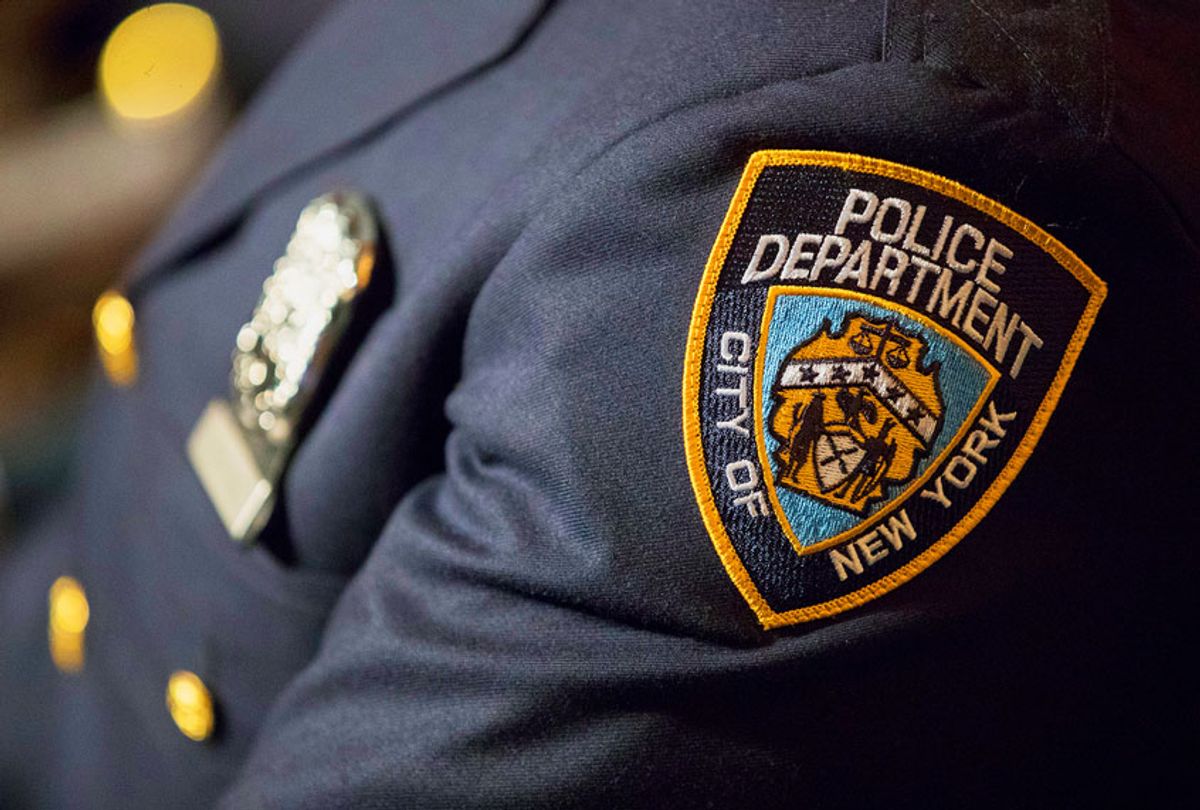 A detail including the badge and shield of one of the newest members of the New York City police. (AP/Mary Altaffer)
--

Back in 2017, Chambers, then 18 years old, was in a car with a couple of male friends when they were stopped by two undercover police detectives. According to Chambers' lawyer, Michael David, the detectives took her to an unmarked vehicle alone where they forced her to perform oral sex on both of them and one had vaginal intercourse with her.

Eddie Martins and Richard Hall, the cops involved, have claimed the sex was consensual. But there is a major problem with that defense — not the absurdity of a teenage girl wanting to leave her friends behind just to go have sex with two police officers, but the fact that a suspect in custody can’t have consensual sex with his or her (or their) arresting officers. In fact, that would now be considered rape, partly because of the coverage of Chambers' case. So this should have been an open-and-shut case, right?

Well last Thursday Chambers received a call form her lawyer, informing her that Martins and Hall had resigned from the NYPD, admitted to having sex with the teenager while in their custody and pleaded guilty to 11 charges, including bribery. They will not, however, spend any time behind bars.

“It’s completely outrageous,” Chambers' attorney, Michael David, said in an interview with Natasha Lennard of The Intercept. “They admitted on the record to having sex with her in their van. No jail time is just outrageous. Anna is hysterical.”

Kings County Supreme Court Justice Danny Chun only sentenced the disgraced officers to five years of probation, even though prosecutors had offered one to three years in prison — for pleading guilty to charges that could have carried a seven-year sentence.

“For the record, your honor, we do oppose a non-jail sentence,” Brooklyn Assistant District Attorney Frank DeGaetano stated during Thursday’s private hearing. Chun, however, appeared to value sexual abusers with badges more than victimized citizens.

This isn’t the first time Chun has favored an unethical and or incompetent cop over the people they are responsible for serving. As the Intercept story details, in 2016 a jury found NYPD Officer Peter Liang guilty of manslaughter after the death of an unarmed black man named Akai Gurley in a Brooklyn housing project. Liang fired into a dark stairwell, and one of the bullets ricocheted off the wall and struck Gurley in the heart. Chun found that five years of probation was appropriate in that matter as well.

So what do we tell Chambers or Gurley’s family or the many people cheated or abused by police officers, and then by judges who are either racist, stupid or complicit in the crimes cops commit? We have no right to believe in justice.

I had a chance to speak at a high school in upper Manhattan last school year about the dangers of police violence. The stories from students were the same — police stealing from them, beating them and harassing them. Then we moved on to cases where there is more than enough evidence to convict — as with Chambers or Gurley or the death of Eric Garner on Staten Island — where cops are clearly guilty but never really held accountable. Those outcomes leave these young people with zero hope.

“All cops aren’t bad though,” a husky black guy in gym clothes said, during the Q&A at my presentation, “We have to admit that some good ones do exist, right?” Dude went on to say that he was a substitute studying to be a cop.

“These things aren’t all black and white,” I explained. “But we should always ask: Where are the cops who rallied for Garner after he was choked to death on video? Who marched for Gurley? These guys almost always go silent on issues dealing with police violence.”

Many of the students and teachers chimed in, attacking the dude for his comment. I silenced the crowd; I wasn’t trying to make him look silly. I was just sharing an experience that has been familiar to many of us and letting him know that he has black skin, so he could be a victim too.

Dude walked up on me after the event to further explain his stance. “Name one restaurant you’d never eat at again.” I said. He told me eating McDonald’s had made him so sick that he spent a night in the hospital and missed work for three days.

I cut him off in the middle of his rant. “All McDonald’s aren’t bad though.” We laughed and he said he would give it some thought. I wish more people would do that because right now Anna Chambers is right: The system is a joke and everyone knows it, even the people who work in it.