The Washington Post urges Mitch McConnell to take action on gun control: "Do something"

"When the Senate returns from its Labor Day recess, it must act on guns," a full-page editorial reads 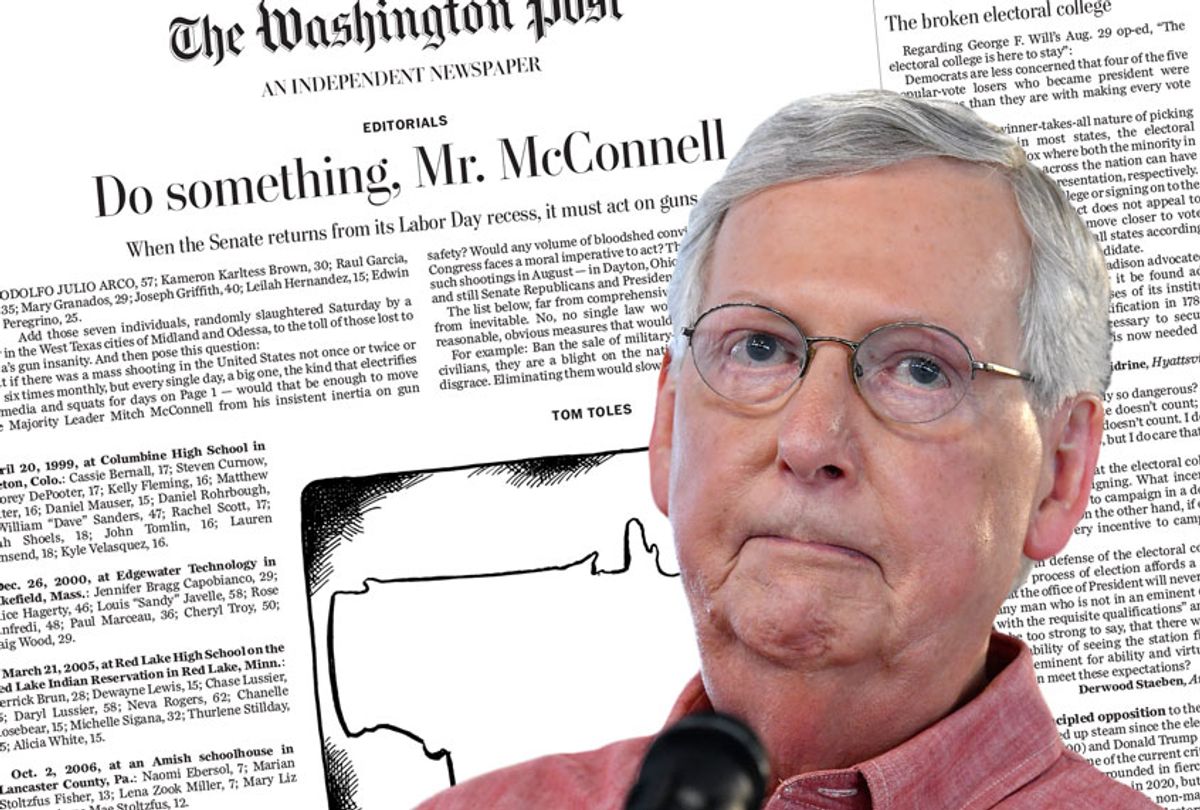 The Washington Post Editorial Board on Wednesday published a full-page editorial listing the names of hundreds of victims of mass shootings alongside one message for Senate Majority Leader Mitch McConnell: "Do something."

"When the Senate returns from its Labor Day recess, it must act on guns," the editorial reads.

The editorial urges McConnell to add the names of those seven individuals to the toll of those lost to "America's gun insanity," then poses the question: "What if there was a mass shooting in the United States not once or twice or four or six times monthly, but every single day, a big one, the kind that electrifies social media and squats for days on Page 1 — would that be enough to move Senate Majority Leader Mitch McConnell from his insistent inertia on gun safety?"

"Would any volume of bloodshed convince the Kentucky Republican that Congress faces a moral imperative to act?" it continues. "Thirty-eight people were slain in three such shootings in August — in Dayton, Ohio, and El Paso, as well as West Texas — and still Senate Republicans and President Trump refuse to act."

The editorial admits that no single law would end the nation's gun violence epidemic, but notes there are "reasonable, obvious measures that would help." It suggests that banning the sale of military-grade assault weapons could "slow the growth on this list" and "save lives."

The Post's plea comes one day after McConnell said he would bring gun control legislation to the Senate floor if such a measure receives President Donald Trump's blessing.

In recent weeks, the Kentucky Republican has faced renewed public pressure to tighten the nation's gun control laws. In August, two back-to-back mass shootings in El Paso, Texas, and Dayton, Ohio, left 31 people dead and more than 50 others injured. Over the weekend, the gunman in Odessa slaughtered seven people and left at least 25 others wounded. Those mass casualty incidents have increased pressure on Congress to pass gun control legislation when it returns next week from its summer recess.

Despite the nation's spate of mass shootings, Senate Republican have suggested they are unlikely to throw their weight behind any gun control measure unless its supported by Trump. The GOP is defending 22 states in the 2020 election cycle, and nearly all are in deeply-red states.

Asked on Tuesday why he would not take up the House-backed universal background check bill to the Senate floor, McConnell claimed lawmakers and the White House were currently in a "discussion" about how to tackle "the gun issue."

"I said several weeks ago that if the president took a position on a bill, so that we knew we would actually be making a law and not just having serial votes, I'd be happy to put it on the floor," he said.

Trump has floated various ideas to curb gun violence since the Dayton and El Paso shootings, but he has not yet backed a specific measure.