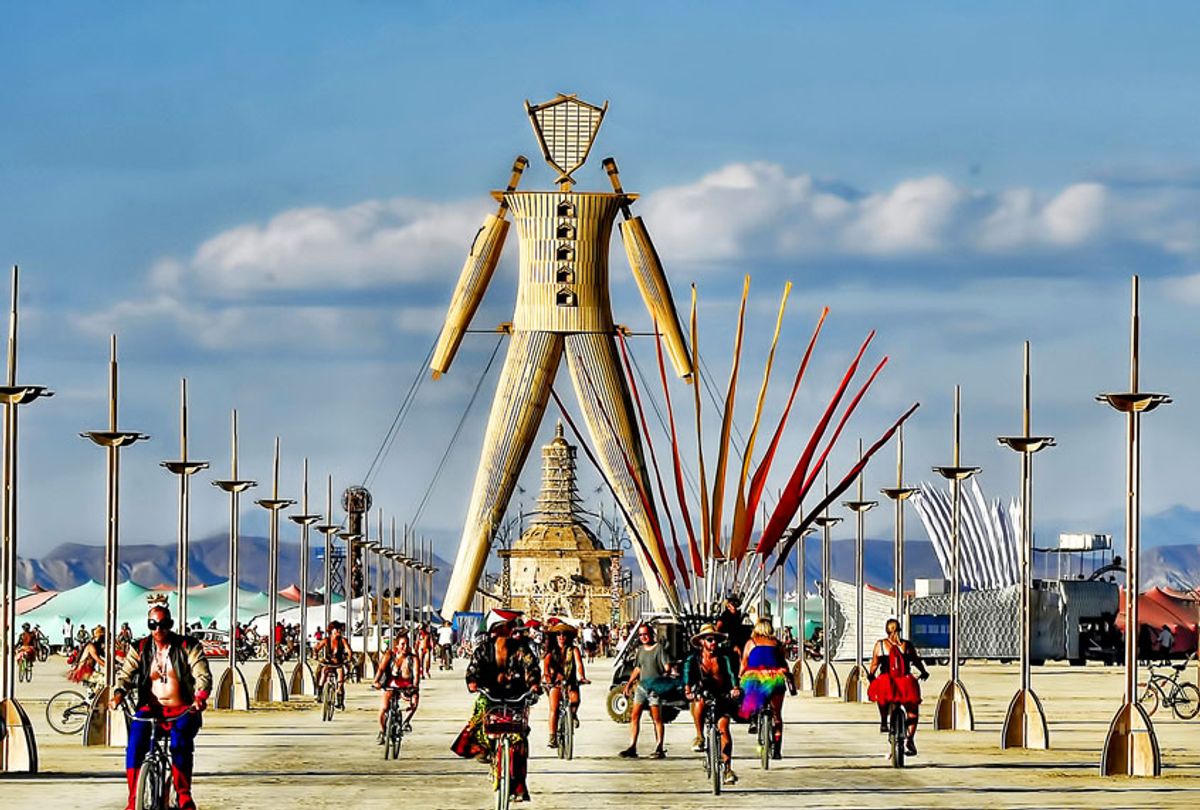 Walkway to the Man (The Burning Man Project/ Andrew Wyatt)
--

This week marked the beginning of school and the end of Burning Man, the week-long festival in the Nevada desert full of freewheeling performance art, fanciful costumes, and a lot of drugs. Two separate Salon investigations in the past two years have uncovered how the supposedly liberating environment has also provided cover for predators of all kinds.

This year, according to the Reno Gazette Journal, the week-long festival had 58 arrests — 14 more than last year. While most of the arrests were for drug possession, one arrest was for a sexual assault incident that occurred on-site but immediately before the event's official start on August 25. Hundreds of volunteers and workers arrive early to set up each year; early entry passes are also sold for the event to participants. Oleg Gennadievich Ivanov was arrested by  Pershing County Sheriff's deputies at the Burning Man site in the Black Rock Desert on August 22, for sexual assault and false imprisonment.

Bryce Shields, Pershing County District Attorney, confirmed to Salon that Ivanov is still being held in custody with a $152,500 bail. Ivanov's preliminary hearing is set for September 11. Details around the alleged assault are unclear, and won't be released until the case is no longer pending.

Shields said while this is the only arrest and sexual assault report he is aware of, “if this year is like previous years, more will be reported after the event.” 36-year-old Ivanov an was the only person taken into custody listed as a “transient.”

Thirty-two of the total people arrested were from California this year, and six were from Nevada. Five were from other countries.

In addition to the arrests, there were two Burning Man–related deaths. The first occurred on Sunday, August 25. Lonnie Richey, a 61-year-old Nevada man, was killed in a fatal car crash on County Road 34, which is a narrow, two-lane, stretch of highway that leads to the event site. Richey, Salon has learned, was working as a flagger for traffic control for the event, contracted through a sub-agency. The Washoe County Regional Medical Examiner’s Office told KTVN that fatigue appeared to be a factor in his death.

Two years ago, Salon spoke to several former and current employees and volunteers for Burning Man, who painted a picture of a dangerous and stressful work environment and a toxic management culture. Those who spoke exclusively to Salon recalled tales of labor abuse, unequal wages, on-the-job-injuries including permanent blindness and a management that manipulated workers who were hurt or who tried to fight for improved conditions.

The second death occurred in Black Rock City itself during the event. A 33-year-old man, Shane Billingham, died at Burning Man on Thursday, August 29. According to USA Today, he was found unresponsive in his vehicle at his camp, Beats Boutique, around 6:30 p.m. Thursday. Bystanders tried CPR. He was then transferred to Burning Man's onsite emergency care center where he was declared dead. According to the Reno-Gazette Journal, toxicology reports showed a poisonous concentration of carbon monoxide in his blood.  The Sheriff’s Office told the Gazette that while a “quantitative analysis of the toxicology will not be available for a few weeks," preliminary results showed "the presence of controlled substances to be an exacerbating factor.” Billingham was from New Zealand.

These are far from the first deaths to occur at or outside the event. A 29-year-old woman died after being hit by an art car in 2014 at Burning Man.

In the aftermath of the festival, one participant-created camp is also facing public scrutiny: Barbie Death Camp & Wine Bistro. The Jewish News of Northern California reports that the San Francisco-based office of the Anti-Defamation League (ADL) is investigating an art display at the camp, featuring "nude" Barbies being herded into kitchen ovens, that has been called “offensive.” Reportedly, the artwork led to an altercation that led to an arrest.

“We have received a number of complaints,” Seth Brysk, the ADL’s regional director, told The Jewish News of Northern California. “Certainly individuals have a right to free expression. But using that free expression to trivialize the Holocaust for the sake of political, social or artistic ends is still deeply offensive and inappropriate. And we would ask people not to do so.”

“It tarnishes the memories of those who died, including the 6 million Jews and 5 million others,” Brysk said. “Particularly in the current environment, where we have a confluence of survivors no longer around to tell their stories, and increased extremism and hatred, we think it’s more important than ever to preserve and respect the memory of the Holocaust.”

The creator of the camp, James Jacoby, told the publication he has staged that camp for the past 20 years. He did not understand what all the fuss was about this year, which included being accused of being a “Nazi white supremacist,” and a Trump supporter, charges that Jacoby described as “nonsense.” We’ve been doing this since Clinton was president,” he said.