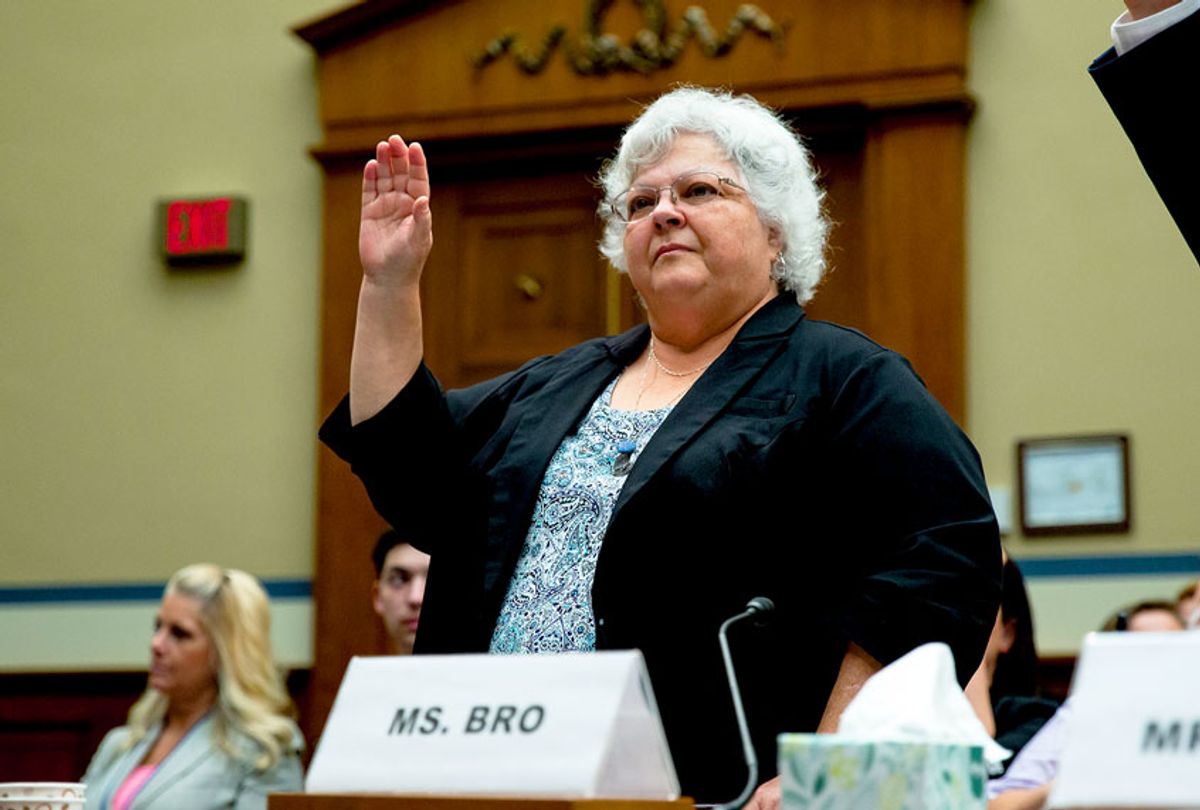 Susan Bro, mother of Heather Heyer is sworn in before a House Civil Rights and Civil Liberties Subcommittee hearing on confronting white supremacy at the U.S. Capitol on May 15, 2019 in Washington, DC. During the hearing, subcommittee members and witnesses discussed the impact on the communities most victimized and targeted by white supremacists. (Getty/ Anna Moneymaker)
--

The mother of Heather Heyer, the young woman who died when a car driven by a self-proclaimed neo-Nazi rammed into a crowd of counter-protesters at a white nationalist rally in Charlottesville, Virginia, is suing the driver convicted of her murder.

Susan Bro has filed a $12 million wrongful death lawsuit against James Alex Fields Jr., who killed Heyer when he drove his car into a crowd of people peacefully protesting the white nationalist "Unite the Right" rally on Aug. 12, 2017 in Charlottesville, Virginia.

The lawsuit, filed Aug. 30 in Charlottesville Circuit Court, names Fields as the only defendant, The Daily Progress reported.

Bro told the newspaper she is suing Fields in an effort to send the message that hate will not be tolerated.

"We want to show others that there are serious consequences for actions of hatred and violence," she said. "This lawsuit is a way to continue to extinguish hatred."

Bro noted she doesn't want Fields's "blood money," but wants to make sure he will never profit from selling the rights to his story or publishing a memoir about the events in Charlottesville.

She reportedly seeks $10 million in compensatory damages and $2 million in punitive damages. Bro and Heyer's father and brother are listed as beneficiaries.

Fields, 22, is a self-proclaimed neo-Nazi. He is currently serving a prison sentence for life plus 419 years for murdering Heyer and injuring more than 30 others when he intentionally mowed them down with his car at the white nationalist rally. His sentencing resulted from state and federal convictions for the attack.

In March, Fields pleaded guilty to 29 of 30 hate crime charges as part of a plea deal to avoid the death penalty for plowing his car into a group of counter-protesters at the rally. He admitted he drove into the crowd of counter-protesters because of their perceived race, color, national origin and religion.

The Justice Department (DOJ) said Fields used social media to express and promote "his belief that white people are superior to other races and peoples," and support "the social and racial policies of Adolf Hitler and Nazi-era Germany, including the Holocaust." He also "espoused violence against African Americans, Jewish people and members of other racial, ethnic and Religious groups he perceived to be non-white," the DOJ noted.

The car attack happened after the rally, which was organized to protest the planned removal of a statue of Confederate Gen. Robert E. Lee.