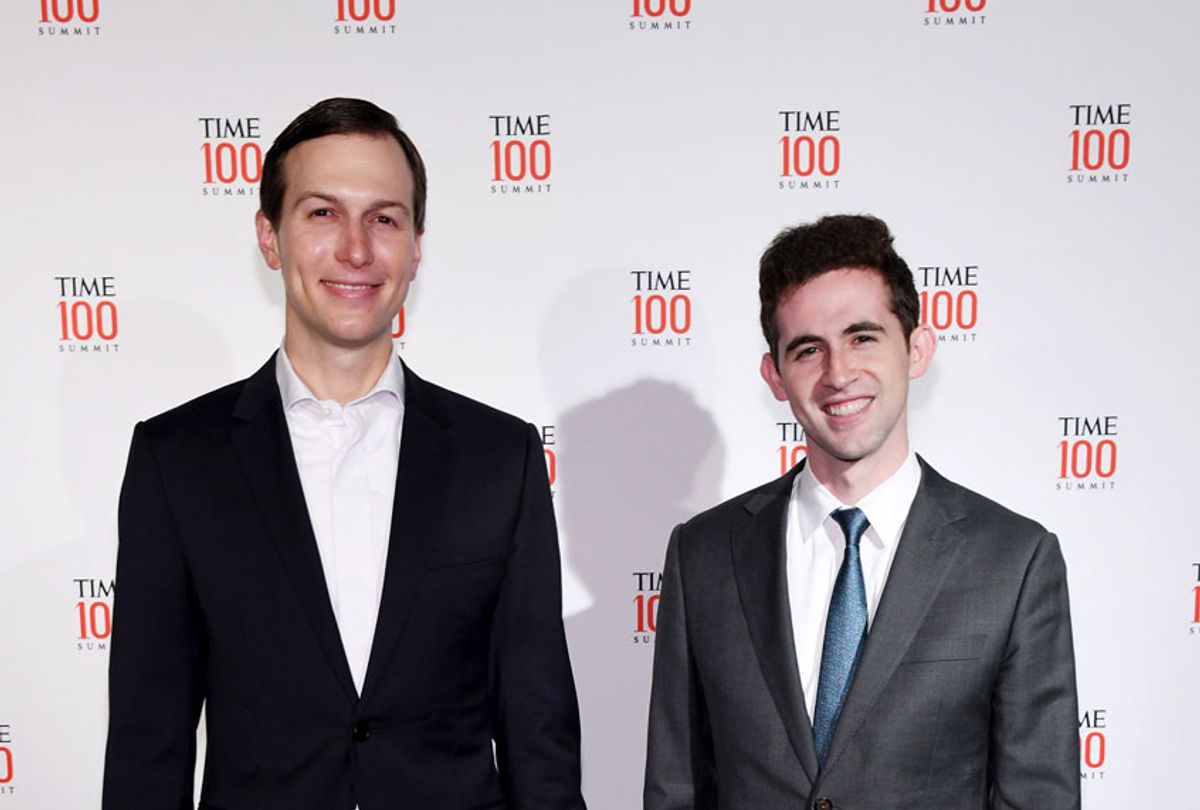 A 29-year-old former administrative aide to Jared Kushner is expected to take over for Jason Greenblatt, the departing White House envoy for the Middle East peace process.

Trump announced Greenblatt’s departure on Twitter Thursday. Greenblatt, whose own dubious qualifications included 20 years of working as a lawyer for the Trump Organization, was the architect of the administration’s supposed peace plan, along with Kushner, U.S. ambassador to Israel David Friedman, and Kushner deputy Avi Berkowitz, who will replace him. Greenblatt is stepping down before the administration has even rolled out the plan, which has already been roundly rejected by Palestinian leaders.

Axios reports that most of Greenblatt’s “assignments and authorities will be transferred to Berkowitz.”

Berkowitz is a 29-year-old friend of Kushner’s who graduated from Harvard Law School in 2016 and met the president’s son-in-law during a pickup basketball game at a Passover celebration in Phoenix, as Business Insider reported in 2017.

The profile described Berkowitz as "in many ways Kushner’s protégé,” who went to work for him at Kushner Companies before joining him on the Trump campaign and later in the White House.

Berkowitz worked on the Trump campaign as an “assistant director of data analytics,” where he was charged with producing the campaign’s “pre- and post-presidential-debate talk show that became a nightly Facebook Live discussion in the weeks leading up to the election,” according to Business Insider.

Former White House communications director Hope Hicks told the outlet that Berkowitz's role at the White House at the time was “primarily administrative and involved assisting Kushner with daily logistics like getting coffee or coordinating meetings.”

Despite Berkowitz's evident inexperience, Kushner has also tasked him with more important responsibilities. During the transition, Kushner sent Berkowitz to meet with then-Russian Ambassador Sergey Kislyak to set up a meeting with Sergey Gorkov, the head of a Russian state-owned bank that had been sanctioned by the Obama administration, as The New York Times reported shortly after Trump took office.

At the White House, Berkowitz was named to the administration’s “peace team” and was a “main player” in drafting the peace plan as he worked alongside Greenblatt for nearly two years, according to Axios.

Greenblatt’s departure comes before the peace plan has even been released, which likely does not bode well for its prospects.

Kushner rolled out the economic component of the plan in June. The plan would create a $50 billion fund that would provide aid to the Palestinian Authority and increase trade with neighboring countries, though it’s unclear where the money would come from.

But the plan was immediately criticized by experts for ignoring reality.

Kushner's plan "treats the West Bank and Gaza as a single entity, which is great so far as the Palestinians are concerned but runs contrary to current Israeli policy and is also belied by the facts on the ground,” wrote Michael Koplow, policy director of the Israel Policy Forum, describing it as “the Monty Python sketch of Israeli-Palestinian peace initiatives.”

The proposal was immediately rejected by Palestinian leaders. Palestinian Authority President Mahmoud Abbas said there would be no agreement without a solution that involves a Palestinian state. “We will not be slaves of Kushner and Greenblatt and the other one, Friedman,” he said.

The plan was also ripped by Daniel Kurtzer, who was U.S. ambassador to Israel under George W. Bush.

“I would give this so-called plan a C- from an undergraduate student,” Kurtzer tweeted. “The authors of the plan clearly understand nothing.”

Berkowitz’s ascent on the “peace team” has not made former diplomats more optimistic about the prospect of Middle East peace. Martin Indyk, who served as special envoy for Israeli-Palestinian negotiations under President Obama, said that the administration managed to replace the unqualified architect of a widely-panned peace plan with someone even worse.

“If Avi Berkowitz is [Greenblatt’s] replacement it’s a considerable downgrade in the position. He’s Kushner’s 29-year-old assistant,” he wrote. “Nice guy but does not have the weight or experience of Trump’s former real estate lawyer.”