Latest exposé of Jerry Falwell Jr. won't touch him, as long as he keeps pushing racism, sexism and homophobia 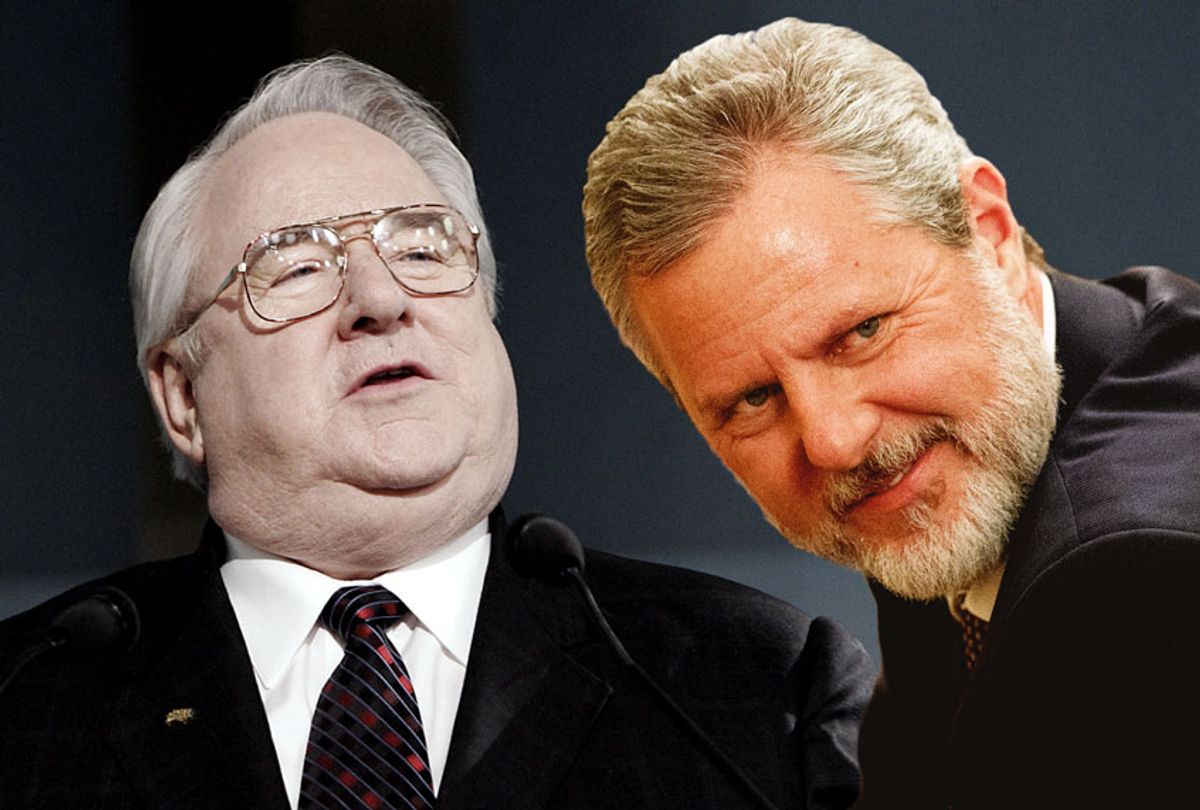 On Monday morning, Politico published a major exposé on Jerry Falwell Jr., the religious right's most influential supporter of Donald Trump and the president of Liberty University, an evangelical institution formed by his father, Southern Baptist minister Jerry Falwell. Writer Brandon Ambrosino paints a damning picture of the younger Falwell as a man unrestrained by his own religion's teachings on sexual morality or any other kind of Christian ethics.

The laundry list of malfeasance and inappropriate behavior is impressive, "from partying at nightclubs, to graphically discussing his sex life with employees, to electioneering" and "directing university resources into projects and real estate deals in which his friends and family have stood to make personal financial gains."

The most titillating story, previously reported by the Miami Herald, concerns the fact that Falwell and his wife, Becki, seem to have have an interesting sex life involving sharing naked photos with other men — men who, likely not coincidentally, enjoy healthy levels of financial assistance from the Falwells and Liberty University. For instance, Politico reports that Falwell sent pictures of his wife in "a French maid costume" to their personal trainer, Ben Crosswhite. They also used Liberty funds to set Crosswhite up as the owner of a lucrative gym.

There's a lot more of this sort of thing, making it quite clear that Falwell is a first-rate hypocrite who poorly hides a love of power, luxury and sexual freedom behind a facade of Christian piety.

But it's foolish to imagine that any of this will affect Falwell's political power or standing with the larger white evangelical community. The pretense that the religious right was motivated by faith and morality was dropped — or should have been — when white evangelicals flocked to vote for Trump in greater numbers than they did for George W. Bush, who if he was convincing about little else, was convincingly a man of faith.

Here's the thing: The real purpose of the Christian conservative movement is to uphold white supremacy and patriarchy, full stop. As long as Falwell Jr. keeps that up — as his father did before him — his flock will stick with him just as they've stuck with Trump, a thrice-married chronic adulterer who has bragged about sexual assault on tape.

The biggest flaw in Ambrosino's otherwise excellent reporting is that his sources repeatedly describe Falwell Jr.'s behavior as a departure from the traditional Christian ethics that his father supposedly stood for. The elder Falwell, who died in 2007, is praised by anonymous Liberty University employees as "a respectable, honest, decent, hardworking man" and as a man who was motivated by "a higher calling."

As anyone who really understands the history of the Christian right will agree, this is complete nonsense. The elder Jerry Falwell was a bigot through and through, and his version of Christianity was primarily, if not solely, about rationalizing a white supremacist, misogynistic and homophobic worldview.

Falwell first rose to fame as a Baptist minister due to his stalwart opposition to civil rights, which he called "a terrible violation of human and private property rights." He declared that the 1964 Civil Rights Act "should be considered civil wrongs rather than civil rights." He also once declared, in response to the historic Brown v. Board of Education case, that if the Supreme Court "had known God's word and had desired to do the Lord's will, I am quite confident that the 1954 decision would never have been made."

In response to Martin Luther King Jr.'s 1965 march in Selma, Alabama, Falwell gave a famous sermon — which was printed out and widely distributed — railing against "church leaders [who] are so obsessed with the alleged discrimination against Negroes in the South." While saying he was personally opposed to discrimination, Falwell insisted that activist clergymen like King "need to get off the streets and back into the pulpits and into the prayer rooms."

Falwell's belief that ministers should stay out of politics only applied to anti-racists, of course. In 1968, Falwell "opened his pulpit to  George Wallace," the segregationist Alabama governor who was then running for president, explains Matthew Avery Sutton in his history of Falwell and the religious right.

Falwell became even more politically involved  when the federal government under Jimmy Carter stripped tax-exempt status from all-white private schools, which Liberty University was at the time. To punish Carter, Falwell helped form the Moral Majority in 1980 to support Republicans and defeat Democrats. He and other organizers shrewdly pivoted away from open support for segregation and opposition to civil rights toward the more politically palatable politics (at the time) of opposition to feminism and LGBT rights. Falwell would try to distance himself from his past by claiming later to oppose segregation, but he kept finding himself on the wrong side of history, such as when he supported South Africa's apartheid government.

So Jerry Falwell Jr. isn't straying from his father's legacy, but expanding it. From the beginning, it's always been about white supremacy and patriarchal control. The sanctimony was just plastered over these ugly intentions to give all that hate a holy makeover. Falwell Jr. is upholding the family tradition of striking the pose of religious righteousness in order to justify his true agenda, which is backing racist politicians and fighting against the liberation of women and LGBTQ people. Beyond backing an overt racist like Trump, Falwell Jr. has been caught, like his father, openly dismissing the real concerns of anti-racism activists.

The only thing that's changed is that the veneer of piety no longer seems as necessary as it once was on the Christian right. In earlier days, maintaining the pretense that the religious right was about "morality" rather than bigotry was seen as critical to the power of Christian conservative ideology. Any leader who got sloppy enough that his sexual indiscretions or self-dealing became embarrassing public knowledge was hastily dispatched to keep up appearances.

But once Trump was elected, all bets were off. Trump's efforts at pretending to be Christian are too weak to be called "half-baked." He can't even get basic Biblical terminology right or show any comprehension of lessons that five-year-olds have learned in Sunday school. The alliance between Trump and the religious right is openly and nakedly about power, and specifically about enforcing racist and sexist hierarchies in American society.

Despite the repeated, strenuous efforts of liberals to point out the hypocrisy, Trump's support on the Christian right never seems to weaken. That's because it was never, ever — not for one moment, even at the height of the George W. Bush era of big-time Bible-thumping — about sincere religious conviction. It was always about white supremacy and patriarchy. To call this "hypocrisy" misses the point, in a sense, because to be hypocrites Christian conservatives would have had to believe in something larger than their own bigotries to begin with.

So why shouldn't Falwell do whatever kinky sex thing he and his wife are into with their fitness trainers and pool boys, all while using his power and university funding to make himself and his buddies richer? The jig is up, and no one really believes in the moralistic posturing anymore. If Christian right leaders once believed that keeping that power meant putting effort into maintaining the illusion of temperance and restraint, that time is long past.

White evangelicals don't care what their leaders get up to in the bed, the bars or the bank account. Nothing really matters except enforcing a social hierarchy that keeps the "right" people in power, and others under their boots.