Forty-seven states have now legalized hemp, but only 11 have legalized marijuana 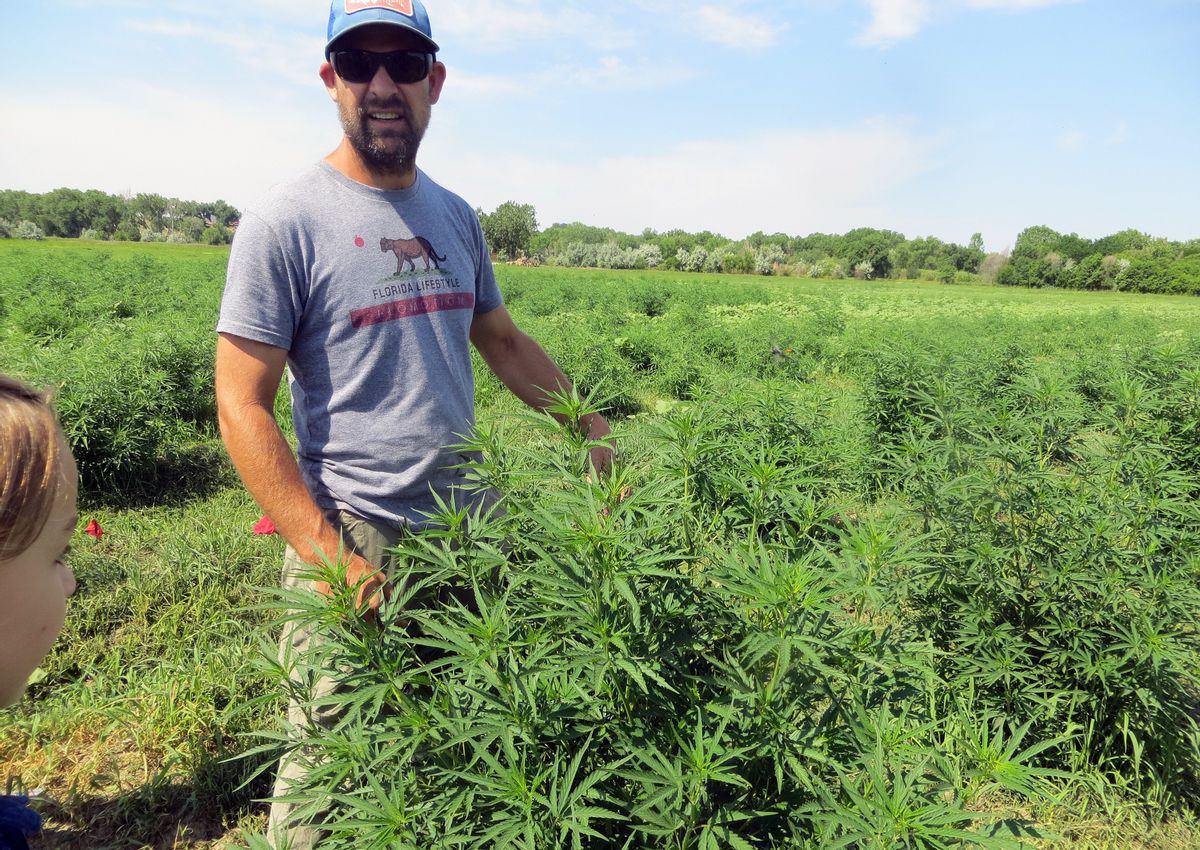 In this June 23, 2016, photo, farmer Will Cabaniss stands with his crop on his 20-acre hemp farm in Pueblo, Colo. Three years into the nation's hemp experiment, the crop's hazy market potential is starting to come into focus. Most of it is being pressed for therapeutic oils, not processed into rope or fabric or more traditional products. Authorized for research and experimental growth in the 2014 Farm Bill, hemp is being grown this year on about 6,900 acres nationwide, according to industry tallies based on state reports. (AP Photo/Kristen Wyatt) (AP)
--

After passage of the 2018 federal farm bill legalized hemp production, states scrambled to pass their own laws legalizing hemp and CBD. But in doing so, they may have inadvertently signed a death warrant for the enforcement of marijuana prohibition.

Forty-seven states have now legalized hemp, but only 11 have legalized marijuana. The other 36 may be in for a refresher course in the law of unintended consequences.

Hemp and recreational marijuana both come from the same plant species, cannabis sativa. The only thing that differentiates hemp and weed is the level of the intoxicating cannabinoid, THC. Under federal law and most state laws, hemp is defined as cannabis sativa containing less than 0.3 percent THC. In those states that have yet to legalize marijuana, hemp is thus legal, but THC-bearing weed is not.

But what police and prosecutors in those states are finding is that they can’t tell the difference between the two. Their field drug tests can detect cannabis sativa, but they can’t detect THC levels. Likewise, police drug dogs can sniff out cannabis, but can’t distinguish between hemp and marijuana.

And if they can’t prove the substance in question is illegal marijuana and not legal hemp, they don’t have a case. Some state crime labs can test for THC levels, but those labs are busy, the tests are costly, and even police and prosecutors are questioning whether it’s worth tying up resources to try to nail someone for possessing a joint or two.

In Ohio, after the Bureau of Criminal Investigation (BCI) analyzed the state’s new hemp law, it sent an August 1 advisory to prosecutors warning that traditional tests could not differentiate between hemp and marijuana and that the agency was months away from “validating instrumental methods to meet this new legal requirement.”

In the meantime, the BCI suggested, prosecutors could turn to private, accredited laboratories, but it also recommended that they “suspend any identification” by traditional tests and not prosecute “any cannabis-related items […] prior to the crime laboratory you work with being capable to perform the necessary quantitative analysis.”

That prompted Columbus City Attorney Zach Klein to announce a week later that he will no longer prosecute misdemeanor marijuana possession cases and that he was dropping all current and pending cases, too.

The prosecutor in surrounding Franklin County, Ron O’Brien, who would handle felony pot possession cases, said his office would probably put those cases on hold unless they involved very large quantities. That’s because even though there are labs in the state capable of measuring THC levels, they still have to be accredited to do so, a bureaucratic procedure that could take months, with a backlog of marijuana cases accumulating in the meantime.

And those tests cost money. That’s why state Attorney General Dave Yost (R) announced in mid-August that the state was creating a special grant program to help local police agencies pay for testing that can differentiate between hemp and marijuana. It allocates $50,000 to help with testing until state-budgeted funding to upgrade state crime labs kicks in next year.

“Just because the law changed, it doesn’t mean the bad guys get a ‘get of out of jail free’ card,” Yost said. “We are equipping law enforcement with the resources to do their jobs.”

He also took a pot shot at Columbus City Attorney Klein, saying: “It’s unfortunate that Columbus has decided to create an island within Franklin County where the general laws of the state of Ohio no longer apply.”

For now, though, it seems like “the general laws of the state of Ohio no longer apply” just about everywhere in the state when it comes to prosecuting marijuana cases.

In Texas, prosecutors have already dropped hundreds of low-level marijuana cases and said they won’t pursue more without further testing. Again, it’s that inability of standard tests to tell the difference between hemp and marijuana.

“The distinction between marijuana and hemp requires proof of the THC concentration of a specific product or contraband, and for now, that evidence can come only from a laboratory capable of determining that type of potency — a category which apparently excludes most, if not all, of the crime labs in Texas right now,” read a June advisory from the Texas District and County Attorneys Association.

Since then, top prosecutors from across the state and across the political spectrum, including those in Bexar (San Antonio), Harris (Houston), Tarrant (Fort Worth), and Travis (Austin), have dismissed hundreds of cases and are refusing more:

"In order to follow the Law as now enacted by the Texas Legislature and the Office of the Governor, the jurisdictions … will not accept criminal charges for Misdemeanor Possession of Marijuana (4 oz. and under) without a lab test result proving that the evidence seized has a THC concentration over 0.3%,’ wrote the district attorneys from Harris, Fort Bend, Bexar and Nueces counties in a new joint policy released ... [in July]."

Travis County officials said they had dropped 32 felony and 61 misdemeanor marijuana cases, and they wouldn’t be doing any more — at least for now.

“I will also be informing the law enforcement agencies by letter not to file marijuana or THC felony cases without consulting with the DA’s Office first to determine whether the necessary lab testing can be obtained,” Travis County District Attorney Margaret Moore tweeted.

As in Ohio, law enforcement is awaiting the availability of certified testing labs, but in the meantime, pot prosecutions are basically nonexistent in most of the state’s largest cities. And now, some Austin city council members are even wondering whether cops there should bother to hand out tickets for pot possession.

It’s not just Texas and Ohio. Once Florida’s hemp law went into effect, the Miami-Dade State Attorney’s Office announced it would no longer prosecute small-time marijuana cases and police in numerous southwest Florida towns and cities are also putting marijuana arrests on pause.

“Since there is no visual or olfactory way to distinguish hemp from cannabis, the mere visual observation of suspected cannabis — or its odor alone — will no longer be sufficient to establish probable cause to believe that the substance is cannabis,” wrote Miami-Dade State Attorney Katherine Fernandez Rundle. “Since every marijuana case will now require an expert and necessitate a significant expenditure by the State of Florida, barring exceptional circumstances on a particular case, we will not be prosecuting misdemeanor marijuana possession cases.”

Other state attorneys across the state are issuing similar memos. In Gainesville, prosecutors are dropping all cannabis charges. But other prosecutors say they will continue to review each case individually, with some like Tallahassee saying they will try “a variety of arguments” before the courts, while other places like Orlando and the Treasure Coast say they will wait until after they receive lab tests before filing charges.

Just across the state line in Georgia, similar scenes are playing out. Gwinnett County Solicitor General Brian Whiteside has begun dropping marijuana casesbrought forward since that state’s hemp law went into effect, and the Gwinnett County Police Department is now writing tickets for pot possession instead of making arrests.

In Cobb County, Solicitor General Barry Morgan warned there would be no blanket dismissal of marijuana cases, but the police chief there sent a memo to his staff saying that “arresting someone for misdemeanor marijuana possession is not recommended.”

In Athens-Clarke County, police have been instructed to stop making arrests or issuing citations. Instead, they will seize the substance in question and write a report. Once testing is available and the THC level is above legal limits, they will then seek an arrest warrant. And DeKalb County is dismissing marijuana cases too, with Solicitor General Donna Coleman-Stribling saying the county “will not proceed with any single-count marijuana cases occurring after the passage of this new law.”

It’s not just marijuana arrests and prosecutions that are at stake. Neither police nor drug dogs can sniff out the difference between hemp and marijuana. That is going to make it more difficult for police to develop probable cause to search people or vehicles, and it’s likely to lead to the early retirement of a generation of drug dogs.

“The dogs are done,” said State Attorney Jeff Siegmeister of Florida’s Third Judicial District. “If they’re pot-trained, I don’t know how we can ever re-certify them. Unless they’re trained in the future in a different way, in my area, every dog is going to be retired.”

“The dog doesn’t put up one finger and say, ‘cocaine,’ two fingers and say, ‘heroin,’ and three fingers and say, ‘marijuana,’” admitted Florida Sheriff’s Association President Bob Gaultieri. “We had a very, very hard bright line up until this point that if a cop walks up to a car and you smell marijuana, well no matter what it was, any amount of THC is illegal, so if you smelled it, that gave you probable cause. ... Now that bright line isn’t bright anymore. Now if you walk up to a car and you smell marijuana, you have to conduct an investigation, and that along with other things may give you probable cause.”

And it isn’t just a handful of states. Any state that has legalized hemp with less than 0.3 percent THC but hasn’t legalized marijuana could face similar quandaries.

“This is a nationwide issue,” said Duffie Stone, president of the National District Attorneys Association and a South Carolina prosecutor. “This problem will exist in just about every state you talk to.”

There is one quick fix, though: Legalize marijuana.