In the wake of Dorian, Bahamian refugees are greeted by chaos — and Trump's cruelty

Refugees from the stricken island nation might include "very bad people," Trump claims. So they must all suffer 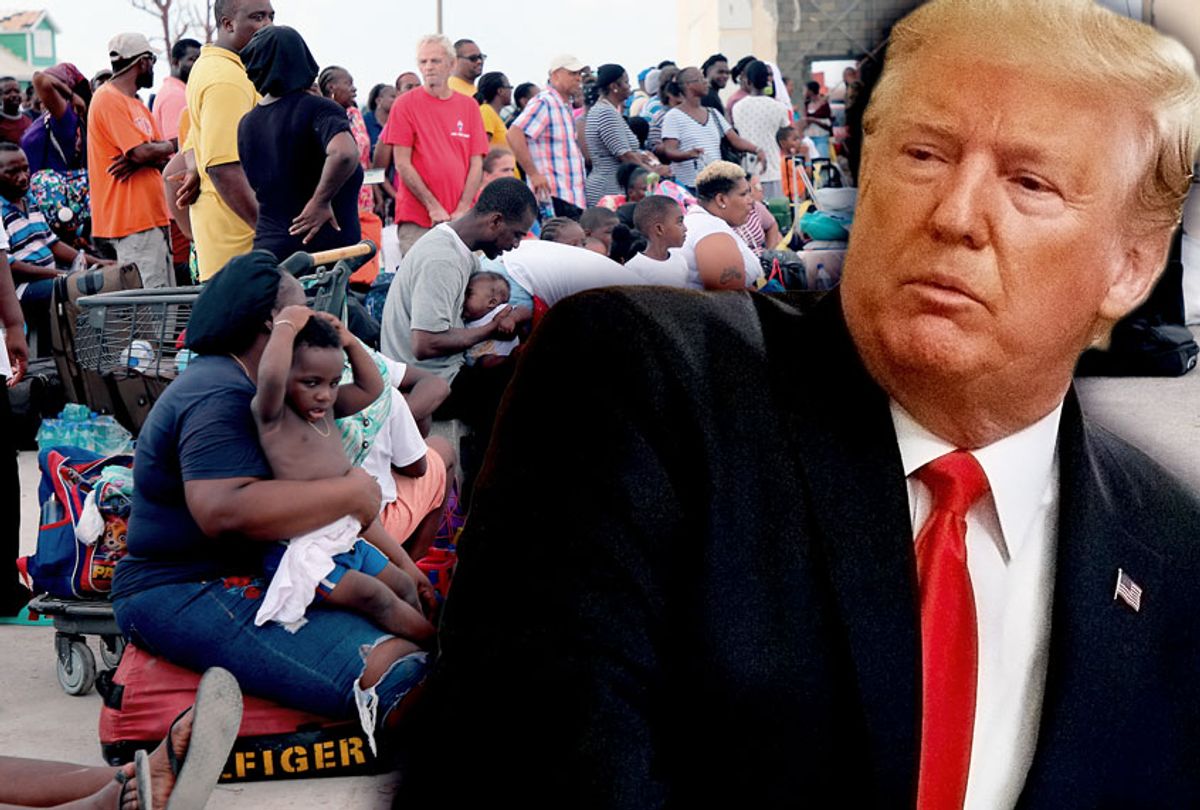 As the Bahamas' death toll rises and more than 70,000 residents are left homeless by Hurricane Dorian, the Trump administration is sowing confusion with its chaotic response to people seeking refuge in the U.S.

At first it appeared that citizens of the Bahamas, an archipelago nation just 110 miles from Florida, would be free to enter the United States, as has been the case in the past. Then an apparent decision by a private maritime operator to avoid trouble with U.S. Customs and Border Protection over the weekend was compounded by President Trump’s pronouncement that hurricane survivors included “some very bad people" who should be left stranded. Trump’s comments on Monday made clear that a policy change, initially sold as a miscommunication by his administration, was actually another capricious act of cruelty, a needlessly inhumane move to block natural disaster refugees.

"We have to be very careful. Everyone needs totally proper documentation,” Trump said in front of the White House after he returned from a weekend of golf on Monday. “I don't want to allow people who weren't supposed to be in the Bahamas to come into the United States, including some very bad people and some very bad gang members and some very, very bad drug dealers."

The president then suggested that these very bad people are likely to exploit humanitarian assistance. "The Bahamas has tremendous problems with people going to the Bahamas who weren't supposed to be there," Trump said before adding that, "believe it or not," some parts of the Bahamas were not hit hard by Hurricane Dorian.

His description of fleeing families echoes his past rhetoric about Central American asylum-seekers and black immigrants from “shithole” countries like Haiti, which like the Bahamas is located in the Caribbean.

The night before Trump’s remarks, more than 100 Hurricane Dorian survivors attempting to leave the Bahamas were forced off a ferry boat from Freeport to Miami due to confusion over visas. Bahamians do not typically need a visa to travel to the U.S. by plane but do if traveling by boat. In case of a humanitarian emergency, the port director can waive those requirements, according to CNN. Such discretion was applied on Friday when about  1,500 evacuees arrived from the islands aboard a cruise ship called Grand Celebration. None were required to show visas when they disembarked in Florida. By Sunday the rule appeared to suddenly change.

"Please, all passengers that don't have a U.S. visa, please proceed to disembark," a crew member of Balearia Caribbean told the Bahamians who had waited in line for hours. Evacuees had initially been told they needed to bring their Bahamian passports and "police record," a paper from authorities verifying they had no criminal record. It is a requirement that puts the impetus on people to proactively prove their innocence, and pay for the privilege of doing so, in order to receive humanitarian assistance. (To say nothing of the people who may have a police record and still need aid after a disaster.)

While CPB officials blamed the ferry operator for ordering evacuees off the boat, the agency had sent notice earlier that transport ships must stop in Nassau before heading to Florida so that evacuees fleeing the natural disaster could obtain U.S. visas. Refusing refugees under these circumstances is a flagrant violation of the Universal Declaration of Human Rights. But administration officials had tried to spin their complicated requirements as routine vetting — until Trump said the quiet part out loud.

"It breaks my heart because it's like when you raise somebody's hopes and then you pop the balloon. ... That, in my opinion, is what Balearia did," CBP Florida spokesman Michael Silva told Newsweek, deflecting blame for the chaos to the ferry operator. “We’re there to facilitate and accommodate that process in an orderly fashion, according to regulation and protocol. However, Balearia did not do that,” Silva claimed. “We asked them to coordinate ahead of time. They did not do that.”

Two hours before Trump’s remarks, acting CPB director Mark Morgan appeared in the White House briefing room to tout the administration's record of apprehension on the U.S.-Mexico border and defended the administration’s work to vet all evacuees from the Bahamas for possible threats to national security. He also confirmed that there was no “formal grant” of temporary protected status for Bahamians, as requested by some members of Congress, including Sen. Marco Rubio, R-Fla.

These shifting signals, and this small-minded cruelty, literally offer a glimpse into the future. Trump has decided to hoard U.S. resources in the face of poor black people displaced by a category 5 hurricane, which was likely exacerbated by warming ocean waters caused by our destructive energy policies — and is justifying it with the same racist dog whistles he uses against black people here at home.