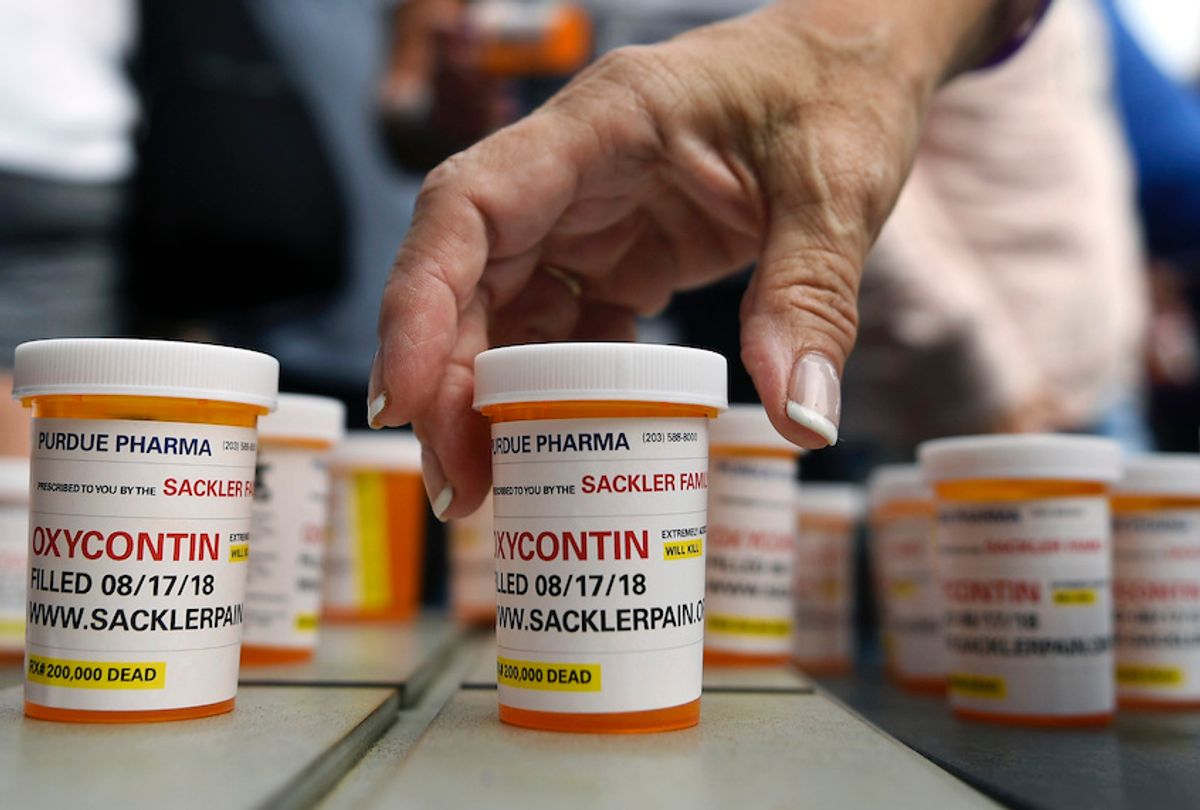 This story is a collaboration between ProPublica and STAT.

Purdue Pharma has tried to refute accusations that it fueled the opioid crisis by arguing it was a small player in the U.S. market for prescription pain relievers. But a new ProPublica analysis of government data shows that the company, the maker of OxyContin, had a far bigger impact than it portrays.

Purdue’s position rests on a Drug Enforcement Administration database, made public by a court order in July, which shows Purdue sold 3.3% of the prescription opioid pain pills in the U.S. from 2006 to 2012.

Last month, when Purdue moved to dismiss a lawsuit by the Massachusetts attorney general alleging that it had downplayed the addiction risk of its potent drug, the company highlighted the DEA statistic in a slide presentation. One slide was headlined: “Purdue makes a very small fraction of opioids nationally.”

Company lawyer Timothy Blank told the judge, “The notion that Purdue has created this epidemic is a serious misconception.”

The number promoted by Purdue, however, is an inadequate measure of market share and understates the company’s role in the opioid epidemic, according to experts and the new ProPublica analysis. That’s because the percentage of sales doesn’t take the potency and dose of the pills into account. The analysis favored by Purdue treats every pain pill as the same, whether it is a 5 milligram Percocet or an 80 milligram OxyContin. It’s analogous to measuring alcohol sales by equating a 12-ounce glass of 100 proof whiskey with a similar-sized can of light beer.

ProPublica analyzed the same data set touted by Purdue but accounted for the wide variation in strengths of prescription painkillers. Besides counting the number of pills sold, the analysis measured the amount and potency of opioid that they contained. Higher doses of opioids are associated with a greater risk of overdose.

On that basis, the market share of Purdue is 16% — about five times higher than the number cited by the company. That makes Purdue the third-largest seller of opioids from 2006 to 2012, behind generic pain pill makers Actavis Pharma and SpecGx, a subsidiary of Mallinckrodt.

“All opioids are not created equal,” said Len Paulozzi, a former medical epidemiologist at the Centers for Disease Control and Prevention who researched prescription opioid overdose risk. He said it is important to adjust for potency because “the risk of an overdose, whether fatal or nonfatal, is directly related to the dosage a person receives.”

Purdue’s contention that it was a minor participant in the opioid painkiller market is both a legal and a public relations strategy. The company has been working to settle more than 2,000 lawsuits blaming it for helping to create the public health disaster, and also to protect the reputation and legacy of the Sackler family, its owners. Once praised for their philanthropy, the Sacklers have more recently been condemned by politicians and advocates for their stewardship of Purdue.

Settlement talks, which included a provision that the Sacklers contribute at least $3 billion of their own money, recently reached an impasse and Purdue is considering filing for bankruptcy, the Associated Press reported Saturday. The Sacklers have been separately sued by more than a dozen states, including Massachusetts and Connecticut, for their role in overseeing the company’s allegedly illegal marketing of OxyContin.

Purdue has long experience at countering criticism of OxyContin. The first reports that people were abusing the drug surfaced two decades ago. Since then, Purdue has repeatedly argued that its flagship drug has done more good than harm. Even when Purdue pleaded guilty in 2007 in federal court to a criminal charge of illegally marketing OxyContin by downplaying addiction risks, it blamed misstatements by employees who didn’t follow company directives. More recently, the company and representatives of the Sackler family have said that the opioid crisis is now driven by “illegal street drugs” such as heroin and fentanyl.

By minimizing OxyContin’s market share, the per-pill sales data that Purdue prefers also muffles the drug’s outsized impact in certain states, especially in the Northeast. For example, Purdue’s lawyer told the Massachusetts judge that the company sold just 4.6% of the prescription pain pills in the state from 2006 through 2012. But when the total amount of opioid ingredient in each pill is considered, Purdue’s market share in the state is actually more than four times higher at 20.5%.

In some states, when sales are adjusted for potency, Purdue sold more painkiller medication than any other company: Purdue was the top seller in Rhode Island, with 31.2% of the opioid market, as well as in Connecticut, where it had 28.5%. In Ohio, which has consistently ranked among states with the highest rates of overdoses, Purdue had one-fifth of the market. In 13 states, Purdue was responsible for 20% or more of retail opioid painkiller sales.

The market share nationally of some companies dropped when potency was considered. SpecGx, which has 37.7% of the market on a per pill basis, fell to 29%. Actavis declined from 34.6% of the total pill market to 30.4% in the ProPublica analysis.

The analysis of the DEA data cited by Purdue was first done by The Washington Post. It partnered with the publisher of the Charleston Gazette-Mail in West Virginia in a joint legal action that prompted the release of the DEA database. The database, called Automation of Reports and Consolidated Orders System, or ARCOS, tracks every opioid pill sold in the country from manufacturer to distributor to pharmacy.

The Post limited its analysis to shipments of oxycodone and hydrocodone, which accounted for three-fourths of all pill shipments to pharmacies. ProPublica also restricted its analysis to the same two drug classes sold by retail outlets and practitioners because the numbers cited by Purdue in court are based on that methodology.

The reason Purdue’s market share is significantly larger when measuring the amount of opioid ingredient sold is because OxyContin is formulated at strengths many times higher than most other pain pills.

When Oxycontin was unveiled in 1996, Purdue’s marketing campaign touted it as providing longer pain relief while allowing patients to take fewer pills each day. To accomplish that, Purdue packed into each pill a large amount of opioid that was slowly released over a 12-hour period. Its largest dose, until it was taken off the market in 2001 amid safety concerns, was a 160 milligram pill.

Abusers quickly figured out how to crush OxyContin tablets and remove the opioid inside. Some snorted it, while others reduced it to liquid form and injected it.

In determining the amounts of opioid painkillers sold by Purdue and other manufacturers, ProPublica calculated a rate called morphine milligram equivalent, or MME, which is commonly used by public health agencies, including the Food and Drug Administration and the CDC.

The calculation standardizes different types of opioids to the same morphine equivalent. Hydrocodone, the opioid in Vicodin, has a potency that is equivalent to morphine. Oxycodone, the opioid in OxyContin, is one and a half times more potent than morphine. When converting to morphine equivalents, the amount of hydrocodone in a pill is multiplied by one, while oxycodone is multiplied by 1.5.

CDC guidelines advise against prescribing more than 90 MME per day. OxyContin users are typically directed by their doctors to take two pills per day. Based on the DEA database, the typical prescription from 2006 to 2012 would have totaled 123 MME a day — an amount 37% above the maximum recommended by the CDC.

A CDC review in 2016 concluded that higher opioid dosages are associated with increased overdose risk. One of the studies cited by the CDC found that patients taking between 50 and 100 MME of painkillers a day were up to 4.6 times more likely to overdose than those taking less than 20 MME. For patients receiving more than 100 MME a day, the risk was up to nine times higher than for the lower dose group.

“If Purdue sold a lot of 80 milligram pills, they are going to have proportionately more of the market on an MME basis,” said Gary Franklin, the medical director for the Washington State Department of Labor and Industries. “That is an important point to get out. People are dying from these higher doses.”

Franklin, who is an unpaid expert for the state of Washington in its lawsuit against Purdue, cautioned that other factors increase overdose risk as well. For instance, people who take benzodiazepines, such as Xanax, at the same time as opioids can fatally overdose on lower doses of painkillers.

The FDA, in a staff report this year, also found that a higher daily dose of opioid pain relievers “likely contributes causally to increased risk of intentional and unintentional opioid overdose.” The agency noted that other factors influence overdose risk and that a substantial portion of overdose victims either did not have a prescription for the pills they took or were prescribed a lower daily dose.

Until 2010, according to the DEA’s National Drug Threat Assessment Summary, OxyContin was “by far” the most commonly abused prescription painkiller in the country. In 2010, Purdue introduced a reformulated version of OxyContin that is harder to abuse. The new version can still be abused if crushed or taken orally, but it does not provide as potent a high as the older version, according to the agency.

In the Massachusetts hearing last month, Purdue relied on the lower per pill market share in oral arguments before the judge and in the accompanying slide presentation of data. One slide stated, “DEA Data Refute the Commonwealth’s Allegations.”

“What the commonwealth has done is create an extraordinary misperception in the community, and it is a dangerous misperception,” Purdue’s attorney Blank told the judge at the Aug. 2 hearing, according to a transcript of the proceeding. “The attorney general says it is all on Purdue. It is not all on Purdue.”

The Massachusetts lawsuit cites internal Purdue records in alleging the company pushed higher doses because they were the most profitable. Authorities also allege that the company knew patients taking more of the drug were more likely to overdose. One Massachusetts doctor, who was paid more than $80,000 by Purdue to give talks to other physicians, prescribed 24 of the highest dose OxyContin pills a day for a single patient, according to the state complaint.

Purdue’s market share from 2006 to 2012 would have likely been even higher save for an anomaly in the history of the drug. For a brief time, including the years 2006 and 2007, OxyContin had generic competition. Its sales slumped from $1.3 billion in 2005 to $752 million in 2006 and $1 billion in 2007, according to health care data firm IQVIA. Purdue sued the generic makers and gradually eliminated competition from them so that by 2008, OxyContin sales more than doubled from the prior year to $2.3 billion.

By that measure, dollar sales, Purdue has long been the market leader for prescription opioids. Internal Purdue records indicate OxyContin had more than 28% of the total market share in gross sales each year from 2008 through 2018. Since 1996, sales of OxyContin have totaled more than $35 billion. The Sackler family received at least $8 billion in company profits during that time, according to court records.

ProPublica is a nonprofit newsroom that investigates abuses of power. Sign up for ProPublica’s Big Story newsletter to receive stories like this one in your inbox as soon as they are published.