Hannity has mentioned Clinton on 86 percent of his shows since Trump's inauguration: study 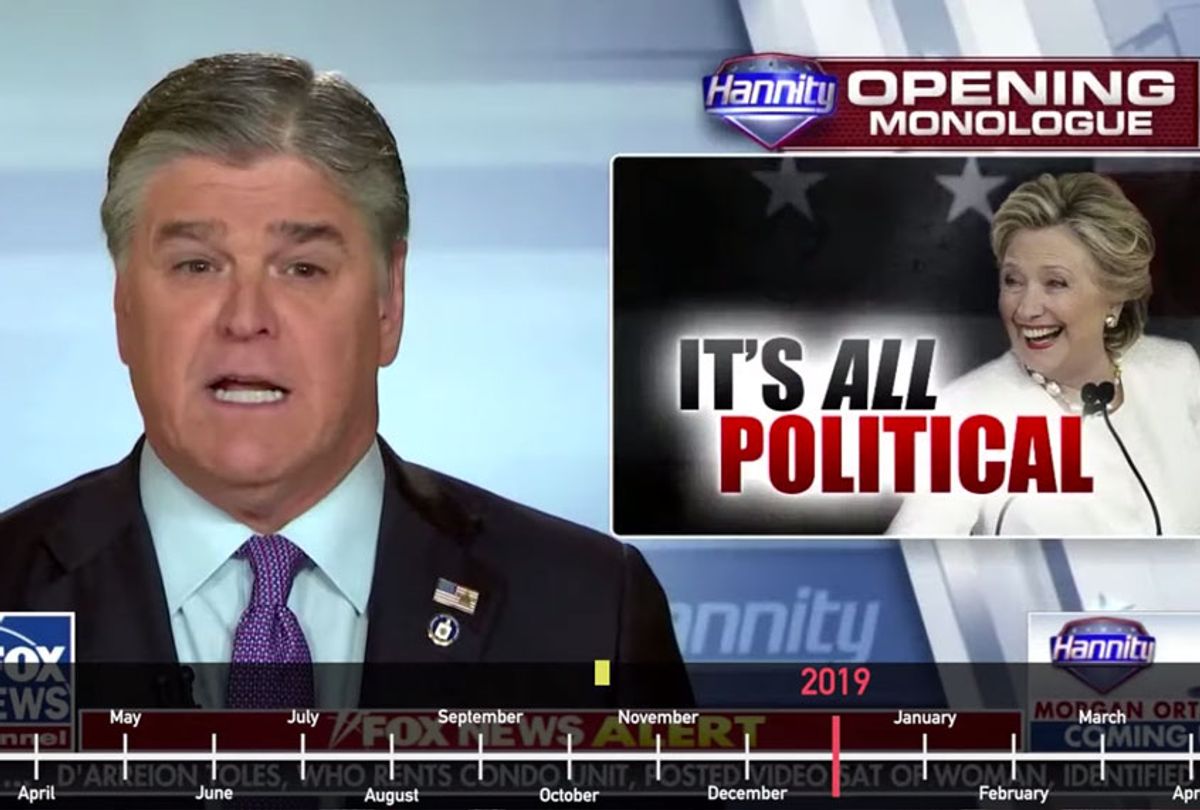 It has been nearly three years since President Donald Trump clinched the White House, however Fox News host Sean Hannity has remained fixated on the Democrat nominated in the 2016 elections: Hillary Clinton.

During the last presidential election cycle, Hannity labeled his primetime show the "Stop-Hillary Express" because of its sustained focus on defeating the Democratic Party's presidential nominee. In the more than two years since Trump defeated Clinton and seized control of the White House, it appears the one-time conductor has continued taking his viewers for a ride on the anti-Clinton train.

From Trump's inauguration in January 2017 through August 2019, Hannity mentioned Clinton in 505 of the 587 episodes of his program — a figure that represents 86 percent of his shows — according to a review conducted by Media Matters for America, a progressive news watchdog. And if you include mentions from guests, Clinton's name was dropped in a staggering 91 percent of the episodes Hannity hosted over that time period.

Hannity's apparent obsession with Clinton is "largely a reflection of his show's focus on the dizzying conspiracy theory he constructed to defend Trump" from former special counsel Robert Mueller's investigation into Russian interference in the 2016 election, according to Matt Gertz, a senior fellow at Media Matters.

Gertz further explained: "Hannity places Clinton at the center of several key strands of that web. In his telling, 1) federal investigators should have been charging Clinton for crimes related to her email server rather than looking into Trump’s associates; 2) some of the attorneys involved in the probe had conflicts of interest because they supported her election; and 3) the investigators ignored the 'real' collusion with Russia that she supposedly engaged in through the Uranium One pseudoscandal and via an anti-Trump dossier that became part of the investigation."

Since Clinton largely receded from the national political spotlight in the wake of her defeat, Hannity's references to the former presidential hopeful decreased in each of the first four months of Trump's administration, according to Media Matters.

In 2017, Hannity mentioned Clinton in 88 percent of the episodes he hosted in January after Trump's inauguration, 76 percent in February, 70 percent in March and just 39 percent in April, the lowest total over the course of the study. That figure spiked to 79 percent in May. Since then, Hannity's mentions haven't fallen below 60 percent in any month since October of 2017.

"When Hannity takes a night off, the 'stop-Hillary express' rolls on, as the show typically features the same guests and themes, including the Clinton-focused anti-Mueller conspiracy theory," Gertz concluded. "His guest hosts mentioned Clinton in 63% of their episodes, and she was mentioned in 85% of the episodes they hosted during the period of the study."