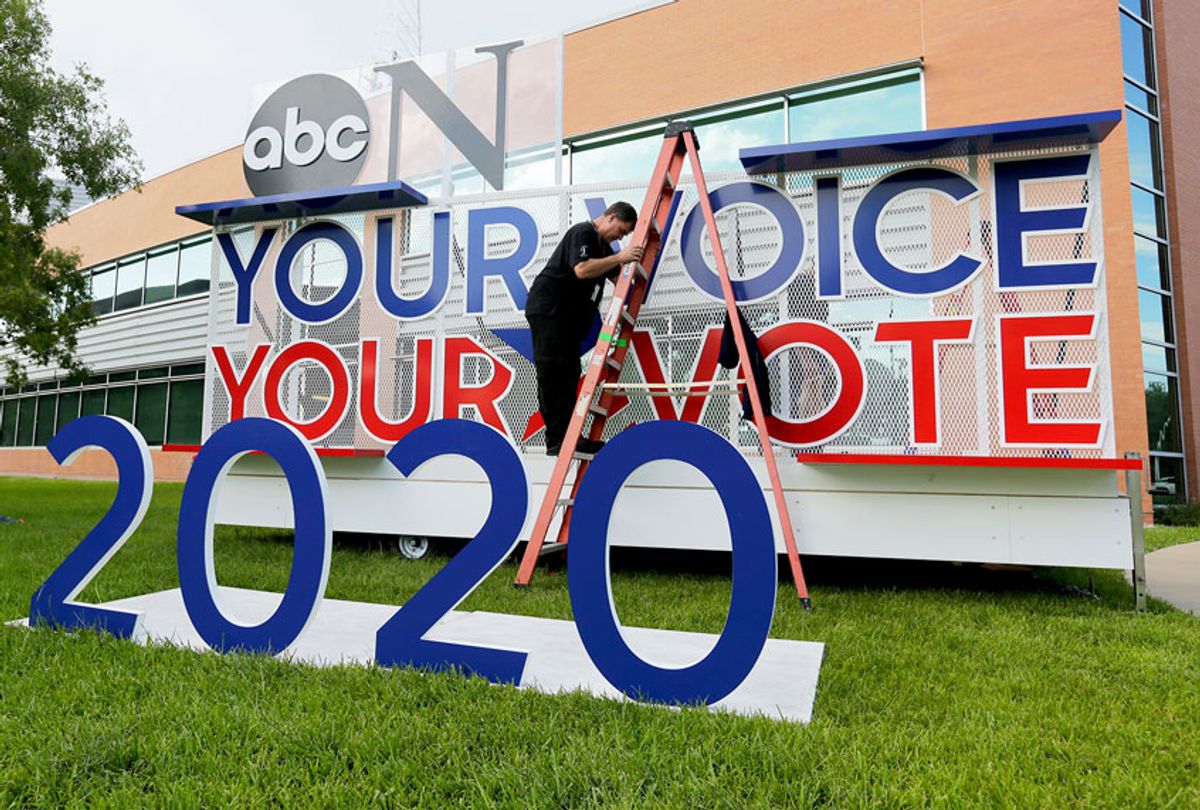 The presidential debate stage on Thursday and the surrounding city of Houston will have at least one thing in common: both will have similarities with the Democratic electorate.

With a higher bar than what the national party set for the first two debates in Miami and Detroit, only 10 Democrats qualified for tonight’s Texas debate; four of them are candidates of color, and all of them will compete for voters’ attention at a historically black college within America’s most diverse city.

The two Texans in the race, former U.S. Housing Secretary Julián Castro and former congressman and U.S. Senate candidate Beto O’Rourke, qualified after achieving the polling and donor requirements necessary to reach the stage. Both are still considered underdogs; a recent The University of Texas/Texas Tribune Poll places O’Rourke running third among potential Democratic primary voters in Texas voters, with 14%, and had Castro back in the pack with only 3%.

Castro and O’Rourke will stand side by side on one end of the debate stage; former Vice President Joe Biden, meanwhile, who has polled consistently higher than his competitors, will be center stage, sandwiched between U.S. Sens. Elizabeth Warren of Massachusetts and Bernie Sanders of Vermont.

The lineup and setting of Thursday’s debate couldn’t be more symbolic of the case Democrats will make as they argue for how they can flip Texas — which President Donald Trump won by 9 percentage points in 2016 — next year. Doing so will rely, in part, on energizing a growing coalition of young people, people living in suburban areas and voters of color. Here’s what to watch for tonight:

Though Texas is O’Rourke and Castro’s hometurf, Biden remains the frontrunner among potential Democratic primary voters in the state. But if Biden has another misstep or a gaffe, particularly on an issue with major implications for Texas, would he see that support wane?

What’s also unclear is whether Biden, who has never shared a stage with O’Rourke, will tussle with the party’s former star candidate for Senate.

Rivals speaking in front of a younger and more diverse audience will likely try to needle Biden on his more moderate economic policy stances and his history of speaking proudly about lawmakers who have previously made racist remarks — like Castro did during the last debate when he challenged the former vice president for not supporting the repeal of a law that would decriminalize improper crossings of the U.S. border.

At other points in the primary, Biden has faced sharp rebukes from O’Rourke for his early support for the Hyde Amendment, a law that bars federal funding for abortions and which most Democratic presidential candidates have called to repeal.

On that issue, Biden reversed his stance. But it’s unclear in Texas — where that UT/TT Poll found health care is the second-most important issue to Democrats in the 2020 race — if Biden’s history on such issues, dating back to his decades-long U.S. Senate career, will bode well among the state’s electorate.

In the lead-up to Thursday’s debate, Biden has already showed he is making a play for Texas. He has plans for at least two fundraisers in Texas — one in Houston and another in Dallas. He picked up five new Texas endorsements on Tuesday.

The former vice president has been buoyed in the state, in part, by support among black and white voters, male voters and voters who are 65 and older. Prominent supporters at his upcoming fundraisers include big-time trial lawyers John Eddie Williams of Houston and Lisa Blue Baron of Dallas, Mike Collier, the 2018 nominee for lieutenant governor and former finance co-chair of the Texas Democratic Party, Henry Muñoz, the former finance chief of the Democratic National Committee and Mike Rawlings, the former Dallas mayor, who endorsed Biden in May.

The two Texans will be stand next to each other Thursday, but far from the frontrunners they need to catch in order for their respective campaigns to make more than a ripple.

Both have tried to lay claim to favorite-son status throughout the campaign. Castro received national acclaim after sparring with O’Rourke in June on the same immigration law cited in his earlier exchange of blows with Biden. Both Texans have worked to declare they were “the” Texan in the race, despite being mired at or near the bottom of most national polls.

O’Rourke will be held to a higher standard going into Houston. Shortly after announcing his White House bid, he launched a rally at Texas Southern University — the same historically black college where the debate will be held. Thursday is the first time he’ll be in the same room as most of his rivals since restarting his campaign following a mass shooting in his hometown of El Paso. And with his recent rollout of a Texas endorsement list with more than 100 Texas names — a bigger in-state number than what any of his competitors have announced publicly — he’ll have more eyes on him in his home state.

Voters outside of Texas have recently seen the rawer, unfiltered side of O’Rourke that won over many Democrats during his closer-than-expected Senate race in 2018 against Ted Cruz. He is speaking more openly about gun-control measures (a recent Morning Consult poll named gun policy Democratic voters’ top issue ahead of Thursday) and also pledged to more aggressively confront Trump, previously saying that the president “speaks so openly in racist terms and so openly favors one race.”

O’Rourke has also returned to using profanity on the trail, in what some have derided as an ill-positioned attempt at salvaging his candidacy. (For what it’s worth, candidates were advised to avoid cursing during the debate since ABC will not be broadcasting without any delay.) But he has yet to see a significant polling spike since he began campaigning again. A poll released earlier this month put O’Rourke at 3% nationally — roughly the same standing he had before he paused his campaign.

Castro, meanwhile, was the last of the 10 Democrats to qualify for Thursday’s debate. Most national attention will be on the candidates at center stage, but if Castro can hold his own — as he did during his aforementioned scuffles with Biden and O’Rourke — he might be able to boost his following and fundraising enough to win a place in future debates.

What’s also working in the former housing secretary’s favor is that he, more than O’Rourke and Biden, has received plaudits for his progressive and comprehensive immigration plan. At prior debates, Castro has called out candidates who disagree with his proposal, so it’s unclear if Castro will make his signature issue the focal point of the evening’s discussion — especially because Texas has become ground zero in the country’s ongoing immigration debate.

Harris and Warren look to make a move

U.S. Sens. Kamala Harris of California and Elizabeth Warren of Massachusetts will be two other candidates to watch, as both have attempted to make a play for the state’s increasingly diverse electorate.

Harris, who is no stranger to the Texas Southern University campus, has been criticized by progressives for her criminal justice record as a prosecutor. But she has worked to regain lost trust. On Monday, she released an anticipated criminal justice plan that included several left-leaning policies she had previously opposed.

With the strategic release of that proposal days before the debate, Harris will likely attempt to position herself at the historically black college as the candidate best-equipped to spearhead policies that would improve black residents’ lives. And with scores of Texas delegates up for grabs, her early support from black and Hispanic politicians in the state highlights her efforts to recruit backing from communities of color in Houston and Dallas.

Warren, meanwhile, who has risen to national prominence for releasing detailed plans on a number of issues that appeal to the electorate, also has ties to the state. The progressive darling is a University of Houston alumna, graduating in 1970 with a degree in speech pathology.

More recently, she has made her presence felt in Texas. On Monday, she endorsed Jessica Cisneros, the primary challenger to U.S. Rep. Henry Cuellar, D-Laredo. She had her first town hall in Texas on Tuesday in Austin.

How will candidates appeal to young voters and voters of color?

The 2020 Democratic primary may be the most diverse presidential primary ever: There are two black candidates, U.S. Sens. Cory Booker of New Jersey and Harris; several women are looking to secure the party’s nomination; and a number of presidential hopefuls, including Warren and Castro, are running to the left side of their party’s base.

With multiple unconventional candidates, traditional debate tactics might not be enough; Democrats on the stage in Houston will have to look for unique ways to capture the attention of a growing voter base that includes more black and Latino voters.

Plus, as the Alexandria Ocasio-Cortezes of the party excite the left, there’s a question of which type of candidate will motivate more voters in 2020: a progressive or a more centrist one.

Thursday’s debate will not only show off the ideological and racial diversity at play in the primary, but will give each candidate a nationally televised forum to address two key voting blocs — young voters and voters of color – that might be needed if Democratic candidates want to cut down Trump’s 2016 margin and win in swing states.