The resolution passed along party lines, by a vote of 24-17 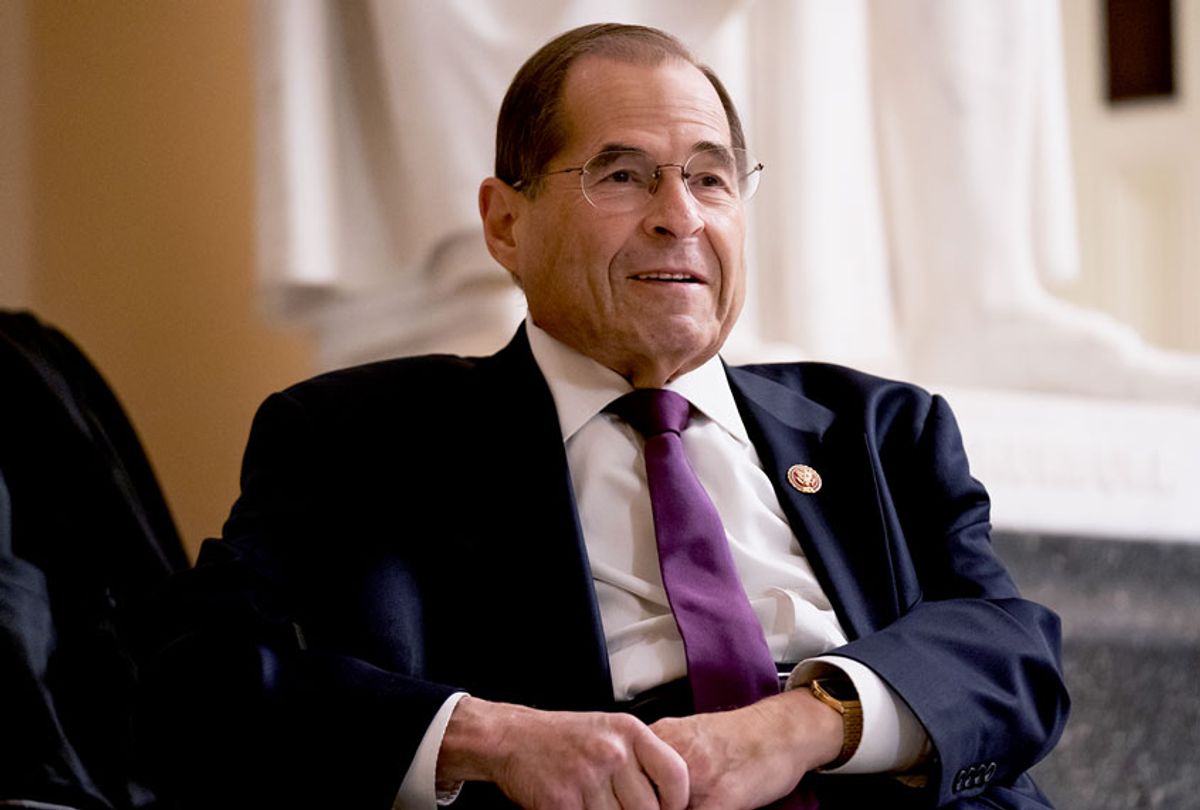 In this July 26, 2019, file photo, House Judiciary Committee Chairman Jerrold Nadler, D-N.Y., prepares for a television news interview at the Capitol in Washington. While more than 130 House Democrats _ more than half of the caucus _ have come out in favor of an impeachment inquiry into President Donald Trump, according to a tally by The Associated Press, those numbers don’t reflect the whole story. The number of Democrats who would actually vote to recommend articles of impeachment, at this point, is significantly smaller. (AP Photo/J. Scott Applewhite)
--

The House Judiciary Committee on Thursday morning escalated its ongoing investigation into whether to recommend articles of impeachment against President Donald Trump, passing a resolution that lays out the rules and procedures for hearings related to the probe.

The resolution, passed along party lines by a vote of 24-17, came even though House Speaker Nancy Pelosi, D-Calif., has repeatedly urged that impeachment does not have public support or strong bipartisan backing, warning that moving forward with proceedings could cost Democrats the House and the presidency in 2020.

Pelosi dodged questions from reporters Thursday about the impeachment probe during her weekly press conference. She noted that she supports "what is happening in the Judiciary Committee because that enables them to do their process of interrogation and investigation.” However, she did not once utter the word "impeachment."

She later added, "I'm not answering anymore questions on this subject."

Pelosi reiterated that her caucus will proceed with its oversight investigations and legal fights against the president and his administration.

Asked by a reporter if she "concedes" that an impeachment inquiry into Trump is underway," Pelosi retorted: "Do I 'concede' now? Have you not paid attention to what we have been talking about for months?"

"For months, we've been saying we're doing three things: We're legislating . . . we're investigating . . . and third, we're litigating. We're taking the work of the committees and taking them into the courts," she continued.

Under the resolution passed Thursday, Judiciary Chairman Jerry Nadler will be able to designate full-committee and subcommittee hearings as part of the probe. The measure allows committee counsel to question witnessesses for an additional hour beyond the five minutes that are given to each lawmaker on the panel. Additionally, the president's counsel will be able to respond in writing to evidence and testimony presented to the committee at those hearings. Evidence could also be received in closed session.

"The resolution before us represents the necessary next step in our investigation of corruption, obstruction and abuse of power," Judiciary Committee Chairman Jerry Nadler said Thursday in a statement.

The first hearing under the new impeachment rules is slated for Sept. 17, when former Trump campaign manager Corey Lewandowski is slated to testify. The panel has also subpoenaed Rick Dearborn, former White House deputy chief of staff, and Rob Porter, former White House staff secretary, to appear before the panel that day as well. The White House has previously blocked key witnesses from testifying before Congress.

There has been significant confusion among lawmakers over the status of the panel's investigation. Nadler on Thursday acknowledged the confusion and sought to eliminate it.

"This committee is engaged in an investigation that will allow us to determine whether to recommend articles of impeachment with respect to President Trump," he said. "Some call this process an impeachment inquiry. Some call it an impeachment investigation. There is no legal difference between these terms, and I no longer care to argue about the nomenclature."

A majority of House Democrats — 134 out of 235 — have publicly expressed support for an impeachment inquiry, including 17 out of the 24 Democratic members of the Judiciary panel.

Republicans, meanwhile, have assailed the mixed signals coming from across the aisle.

"Democrats followed the yellow brick road, and now they're fully lost in impeachment Oz—try as they might, they can't find their way out of the mess they've made because they think 'words don’t matter,'" Rep. Doug Collins, R-Ga., the top Republican on the Judiciary Committee, tweeted Thursday.