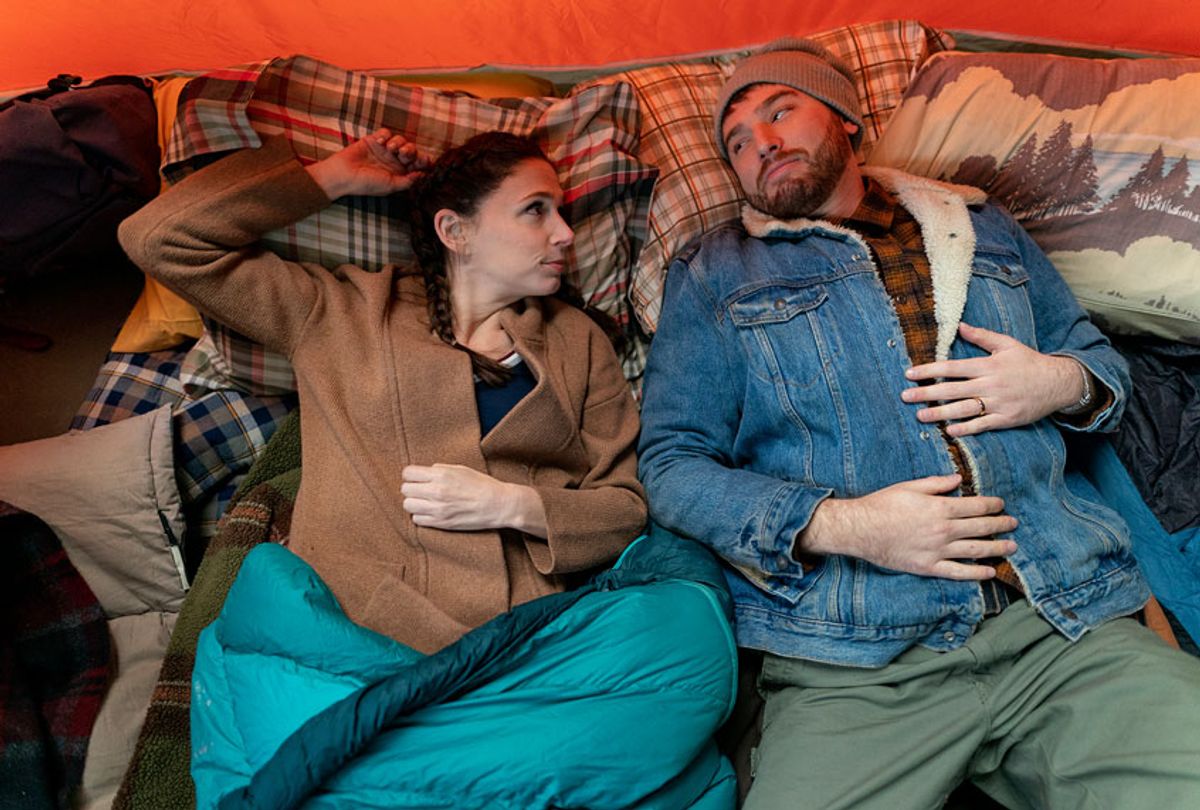 Shoshannah Stern as Kate, Josh Feldman as Michael in "This Close" (Michael Moriatis/SundanceNow)
--

Going home for a family visit tends to be challenging in the best of circumstances, especially for people whose parents refuse to see their adult children as anything other than children. For people like Kate (Shoshannah Stern), the co-lead of SundanceTV’s dramedy “This Close,” every homecoming is a journey into a minefield of frustration. Her mother doesn’t merely treat her like a child, but an obstinate one, a source of frustration born out of navigating Kate’s deafness as a hearing, perfection-obsessed Southern belle.

This being a show centered on Kate and her best friend Michael (Josh Feldman), a pair of deaf twenty-somethings figuring out life in Los Angeles, we experience life from Kate’s perspective, not her mother’s. As Kate wakes up in the morning, we hear the world as she does before she can put in her hearing aids, hear what it’s like for her to deal with the digital beeps as they turn on, and appreciate the fact that even with mechanical assistance the world can still sound like it’s underwater.

Later, as her mother entertains another woman with a teenaged daughter who is also deaf, we witness the conversation from Kate and the girl’s perspective, empathizing as their mothers talk about them as if they are elsewhere.

“You speak very well for a deaf person,” her mother’s friend tells Kate, utterly unaware of how patronizing that statement is. Kate wryly smiles and says, with a note of sarcasm, “Thank you.”

These describe just a couple of moments in the second season of “This Close,” debuting Thursday at 9 p.m. PT and midnight ET on Sunday TV. These moments also exemplify what makes the show extraordinary.

“This Close” is the story of the bond between Kate, a publicist, and Michael, a graphic novelist, that saunters well past codependency. Their friendship is profoundly sweet, but they’re also too reliant on one another at times, an issue that hearing people face as frequently as deaf people do. The difference is that deafness places them in a private space few others in their lives can or are willing to enter, enabling Kate’s and Michael’s bond, for better or worse.

There aren’t many series that take viewers inside the experience of what life is like for someone who doesn’t fit into the definition of what the world considers to be “standard” or the “default” without edging their way into othering the marginalized people they’re striving to represent.

But no other series on TV right now is created by deaf actors telling stories about their lives, and for the very simple reason that few series cast deaf actors or create parts for them.

“We approach this show from a writing perspective, where we don't think about representation first,” said Feldman in a recent interview Salon conducted with him and his co-star Stern. “How can we tell a story that we know personally? It's not really about representation, it's about 'this is my life experience.'”

Then again, he adds, “Of course it's going to be about representation to other people who are not involved with the show. Like, when I see somebody like me on television —  a gay person, a deaf person — I know what that feels like. But I don't know what that feeling is that really connects you to a show.”

In plots emphasizing cultural representation, the viewer can be a visitor or a witness but perhaps not truly understand the experience of being a minority in a society that erects barriers for one type of person while smoothing the way for others. Spending time with Kate and Michael, however, makes those barriers tangible.

“Part of growing up and becoming an adult is figuring out your place in this world,” Feldman said. “And as a deaf adult, there's that added layer of like, 'I'm an adult out in the real world, but I'm also a deaf adult and I'm going to have to figure that out.' And that's going to be a different experience than it is for other adults, figuring out what works for you as two deaf adults living their place in this larger world.”

Stern also emphasizes the core importance of the Kate and Michael relationship above everything else.

“The friendship is the third character on the show," she said. “We have Kate and Michael together, and then we have their friendship, which really is a character of its own. They're restructuring themselves, they're reshaping themselves, so I feel like we're currently going into what happens with a friendship when all of that is happening. We often see that in romantic relationships. But friendships are not as black and white.”

The eight-episode Season 2 is a larger world for “This Close” in contrast with the first season, which grew out of a web series and ran first on SundanceNow, the network’s streaming service. In this new season Stern and Feldman write Kate and Michael into spaces beyond their work and home lives, and play with the implications of that. A camping episode, for example, emphasizes the sounds of nature over conversation, even though the conversation is, of course, constant throughout.

In this way, the creators are decidedly conscious about placing the viewer inside not just their view of the world but, as much as possible, their physical experience of it. Other series have featured special episodes or portions of episodes that depict life from the perspective of deaf characters, among the better known being the silent episode of the ABC Family (now Freeform) series “Switched at Birth” and a vignette within an episode of “Master of None.”

“This Close” continues to be blessed with thoughtfully-cast recurring characters and guest stars. Cheryl Hines is hilarious as Kate’s blinkered boss Stella, who is fully aware of her expansive narcissism and refuses to curb it. Marlee Matlin made a cameo in the first season as Michael’s mother, while the latest season introduces Steven Weber as his father.

“Desperate Housewives” star Marcia Cross is an inspired choice for Kate’s mom, a Southern belle more concerned about the outward appearance of perfection than her daughter’s evolution away from dependency. One might also be tempted to puzzle over the layered meaning of casting Lisa Rinna as the mother of Michael's boyfriend Ryan, and Jessica Tuck as the deaf teen’s friend — all current and former soap opera stars, a type of actor synonymous with heightened glamour.

But the rest of the cameo roster is just as impressive, including Austin Nichols, Camryn Mannheim and Margaret Cho.

All of them join the audience inside of Kate and Mike’s shared bubble, a world inside of a world, rare and intimate, but also irritating and scary at times. The camping episode co-stars Moshe Kasher, a comic who is the son of deaf parents, and it’s funny, frightening, exhilarating and sad within the same half hour. It also asks a person to reevaluate their definition of silence and concept of what it means to be deaf.

Kate and Michael contend with ableism at every turn, so much that it only becomes glaring when the world aggressively invades their bubble. Kate battles to be taken seriously in a field that claims to prioritize representation but dismisses opportunities to walk the walk when the rubber hits the road. Michael’s drinking problem, meanwhile, is blocking forward movement in his personal life and career.

“It’s because you're being an asshole,” Stern breaks in.

“Sometimes it's easier to put the fault on something else," she continues. "Have a scapegoat, you know, a ‘get out of jail free card.’  But you have to look at me as a person. This is affecting my choices apart from being deaf, and how does being deaf influence the worst flaws that I have? So there's always this added layer on top of everything. I mean, you can't really remove it from who you are. It's all intertwined.”

Many wonderful comedies and dramas play in this emotional field, and certainly Stern and Feldman aren’t shy about depicting the special benefits of not being able to hear alongside the drawbacks.

One of the funnier moments establishing the series’ brand of comedy shows the pair on a plane enjoying a wonderful conversation, oblivious to the wailing baby driving the passengers around them toward madness. The situation quickly flips, however, when a flight attendant misunderstands their sign language as aggression and kicks them off the plane.

The second season opener also veers into this strange, aggressive territory where the hearing world bumps up against the deaf one, picking up from the first season finale with Michael headed to the hospital after being hit by a car. Only here, there are multiple obstacles. For starters, Kate can’t stand Michael’s boyfriend Ryan (Colt Prattes), which creates friction when only one of them can ride in the ambulance.

At the hospital they run into more problems owing to rules about family members in the emergency room, and no ASL interpreters around to bridge communication between Michael and the staff.

The feeling quickly evolves from frustration to frightening disconnect when an exhausted nurse whisks Michael out of his room without notice and treats him as if he’s deranged because he doesn’t understand that Michael is signing questions with escalating anxiety.

These scenes are part of a dramatic turn for Kate and Michael’s relationship, but they also highlight an idea Stern says is a driving force of the show. “Everyone has their own bubbles. What is your bubble? How do you feel when you're with your person inside your bubble? That type of idea is pretty familiar to people across the board.”

She added that she loves that people call “This Close” a groundbreaking show. “But if you just stop there, if you’re just breaking ground, then that's it. The point of having something being groundbreaking is that you build up from there. . . .  I think we really want to build something that's strong.”