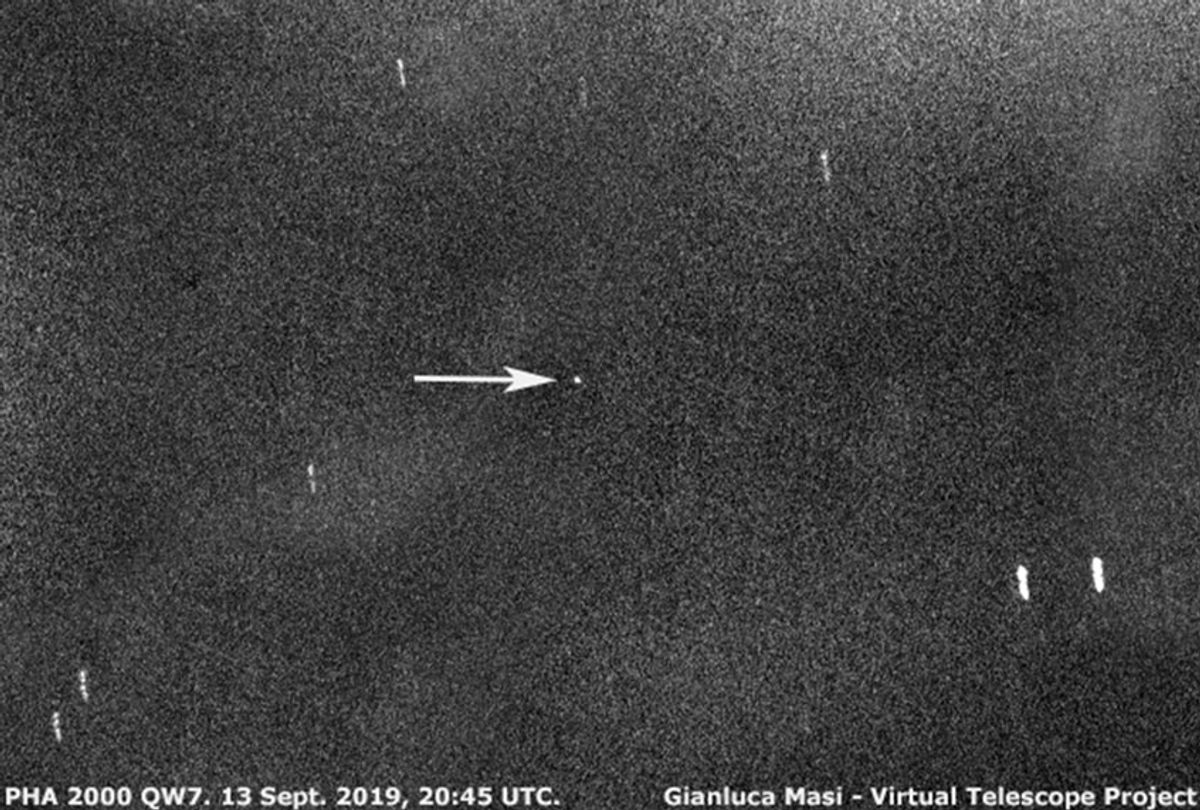 On Saturday night, an asteroid that is between 300 and 600 meters in diameter will fly by Earth. To put its size in perspective, Chicago’s Willis Tower is 412.7 meters high.

Experts say the asteroid, known as Asteroid 2000 QW7, will miss our planet by about 3 million miles — around 14 times the distance between the Earth and the moon. And while that distance is astonishingly close on an astronomical scale, it does not suggest that the asteroid is going to hit Earth — although it has a small chance to strike our planet in the future. The closeness of its pass on Saturday will allow astronomers to hone their measurements of its trajectory, allowing for more accurate calculations of its strike probability in the future.

Gianluca Masi, Scientific Director at The Virtual Telescope, told Salon in a statement that amateur astronomers can view its fly-by, which is at 7:54 pm on the East Coast, but will have to have a telescope with a diameter of at least 250 millimeters. Masi said a smaller telescope might work if combined with a sensitive imaging device that can also record its apparent motion across the stars.

“Around the fly-by time, the asteroid will be about 8 degrees south-south-west of the bright star Fomalhaut,” Masi said in an email statement. “An accurate position can be retrieved via the JPL's Horizons website here.”

Experts at B612 Foundation, a non-profit organization whose mission is to protect Earth from asteroid impact, say while this is not a threat to our planet today, it could be in the very distant future, as its orbit will cause it to repeatedly pass near Earth. Asteroid 2000 QW7 was first discovered by NASA astronomers on August 8, 2000.

NASA released a statement this week to the public to emphasize it is not a threat, noting that it is actually one of two asteroids to pass Earth this weekend. The second asteroid, asteroid 2010 C01, is estimated to be 120 to 260 meters in size (400 to 850 feet).

“These asteroids have been well observed — one since 2000 and the other since 2010—and their orbits are very well known,” Lindley Johnson, planetary defense officer and program executive for the Planetary Defense Coordination Office at NASA, said in a statement. “Both of these asteroids are passing at about 14 lunar distances from the Earth, or about 3.5 million miles away, but small asteroids pass by Earth this close all the time.”

Experts at B612 Foundation say these asteroids are a reminder that we must be prepared in the future to deflect one that might be a threat to Earth.

As Salon has previously reported, one of the biggest impediments to accelerating asteroid discovery and deflection is funding.

“Here is a problem that is a very solvable,” Danica Remy, President of B612 Foundation, told Salon in 2018. “When you think about big global problems a lot of them are not going to be as easy to solve . . . . but [asteroid impact] is [a] smaller [problem] compared to famine or war or climate change.”

John Carrico, an Institute Astrodynamicist at B612, explained to Salon that new computational capabilities have enabled scientists to better understand which kinds of asteroids can and cannot be identified and mapped with certain telescopes. However, bigger telescopes are still needed to detect all nearby asteroids — particularly smaller ones whose impacts could destroy cities, yet would not cause planetary-wide extinction.

“Basically, we have only found the big asteroids so far because they are easier to see with a telescope,” Carrico explained. “We need more powerful telescopes to see the little ones [...] There are possibly tens or hundreds or thousands of asteroids out there, and we don’t know where they are, but they could wipe out a city or create a tsunami,” he added.