Cyclists keep getting killed. Can New Orleans keep them safe? 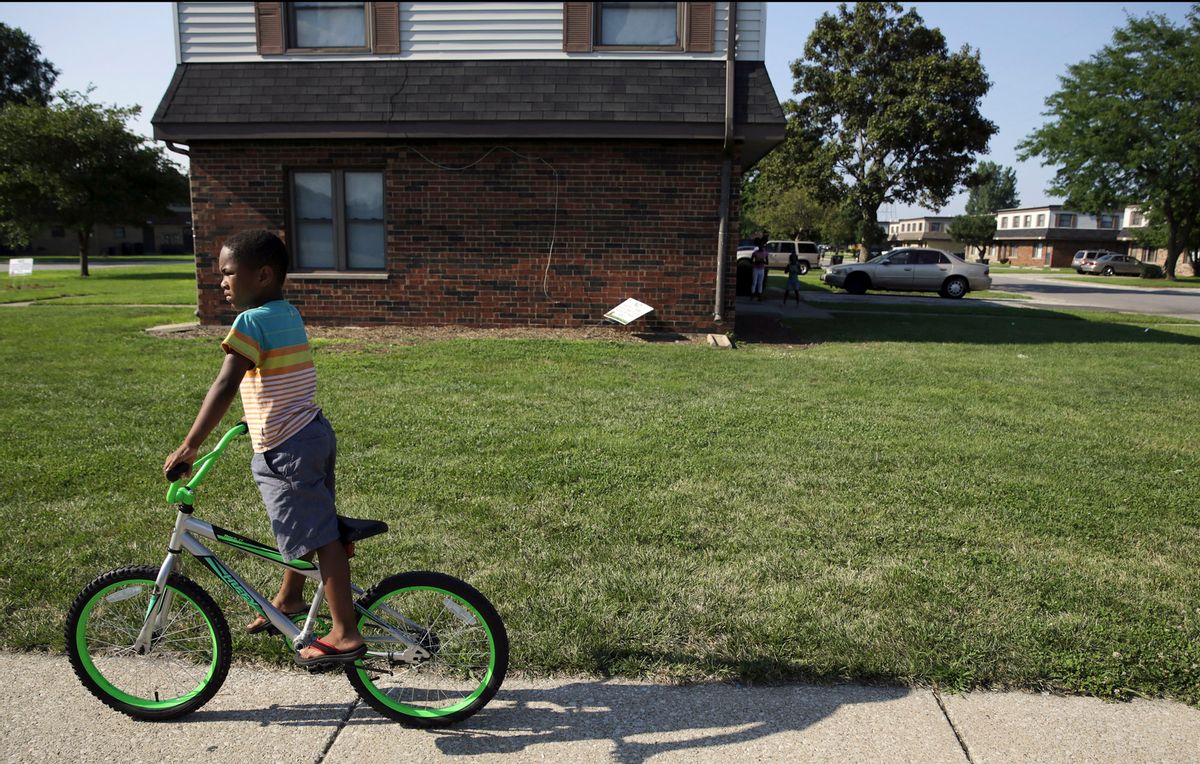 It started with a revving engine and what sounded like a series of fireworks. It was the Saturday before Mardi Gras in New Orleans, and Esplanade Avenue was crowded with cars leaving the evening’s parade. I looked out a cafe window and saw dust settling over the street. As a silent crowd began to gather, I noticed the shards of bicycle scattered across the road.

Later that night in March, the headlines trickled in. At least eight people in a bike lane had been hit, and two of the cyclists — Sharree Walls and David Hynes — had died. The driver, the son of a New Orleans Police Department officer, had tried to pass a line of cars by driving through an unprotected bike lane for four blocks at 70 miles an hour.

Their deaths were part of a larger crisis on American roads. In cities across the country, cycling and pedestrian deaths are climbing. Overall traffic deaths were down about 1 percent last year, while cycling deaths jumped 10 percent, according to a preliminary projection by the National Highway Safety Administration. There’s a similar pattern for those on foot: More than 6,000 pedestrians were killed last year, compared with some 4,000 in 2008.

What’s behind the rising death toll? Distracted driving and more dangerous vehicles. SUVs, with high, deadly bumpers, have exploded in popularity with lower gas prices. As cities grow more expensive and people move to cheaper suburbs, commute times have ballooned. Smartphones have allowed drivers to be more distracted. In short, if you’re not protected by the metal shell of a car, you’re in more danger than ever.

Cities are beginning to address the problem in lurching steps. New York City, where 19 cyclists have died this year, kicked off the summer by aggressively ticketing cyclists for not riding in often-blocked bike lanes, before announcing a $58.4 million bike lane investment after weeks of protests. Although many cities are inching towards better infrastructure, backlash to bike projects is so common that it has its own Wikipedia page. New Orleans, on the other hand, is revamping its streets, an effort that started in earnest a few years ago which is now gathering strength.

In the next two years, the city plans to complete a “rapid buildout” of 75 miles of lanes around the crash-heavy downtown core, in an effort to create streets “that are more comfortable and accessible for all ages and skills,” according to Jennifer Ruley, a senior project manager with the city’s Department of Transportation.

More than $12 million has already been allocated for the project, including a $2.6 million grant from the nonprofit People for Bikes. But the city says that this is just a first step in a much larger plan to reshape New Orleans’ streets. The specifics of that long term project are subject to change in the coming months, and as Ruley told The New Orleans Advocate, a fully-connected bike system will take years to implement. Still, a draft map of the plan released by the city’s Department of Transportation in July gives some clues. The proposal, the result of dozens of community meetings, would add hundreds of miles of mostly protected bike lanes to the city and build barriers on many existing bikeways.

Robert Henig Bell, the campaign director at Bike Easy, a New Orleans bike advocacy group, calls it a “big bang” for biking in the city. He echoed a line I heard from nearly every bike advocate and public official I spoke with: Flat and relatively dense New Orleans could be one of the best biking cities in the world if it weren’t so dangerous.

The crash on Esplanade heightened public attention on the need to make the streets safer for pedestrians. But city officials are emphatic that improvements were coming anyway. “It’s purely coincidental,” said Daniel Jatres, program manager for New Orleans’ Department of Transportation.

New Orleans has had a “complete streets” ordinance on the books since 2011 that directs the city to consider bikes, pedestrians, and public transit in all transit development. In spite of that, bike lanes were usually built only when a road was being reworked. That has left awkward, dangerous gaps in the network, but Jatres said the strategy allowed the city to maximize existing funding. And it’s laid the groundwork for a rapid expansion, Jatres said. Before the complete streets ordinance, New Orleans had eight miles of bike lane, according to Jatres. Now, it has 130.

Late last year, Bike Easy, with city approval, piloted a project called “Connect the Crescent,” building temporary protected bike lanes and crosswalks through the dense, tourist-heavy riverfront, all on the nonprofit’s dime. Ridership spiked, maximum car speeds dropped, and business owners — often opponents of new bike lanes — didn’t put up a fight. In a survey taken by Bike Easy at the end of the experiment, half of business owners in the area who responded were neutral, and nearly 40 percent embraced the project.

Kristin Palmer, a New Orleans City Councilmember who’s spearheaded safe streets legislation, thinks the public’s growing support is indicative of a decade of progress. Palmer said that when she entered office in 2011, a conversation about protecting cyclists from traffic wouldn’t have even been on the table. Now, she said, “When I go out and talk to the hospitality industry” — one of New Orleans’ biggest employers — “one of their first concerns is that they can’t get people to work.” They see bike infrastructure as part of the solution.

Still, advocates say the deaths of two people on their bikes during Mardi Gras changed public opinion and influenced policy. Following a series of meetings with bike advocates and victims’ families, the New Orleans City Council introduced a minimum fine for blocking bike lanes. A group called Bike Uneasy (no official relationship with Bike Easy) began plastering the city with hand-painted signs saying things like “Don’t kill me on my bike.” In at least one case, Bike Uneasy installed an orange traffic post in the middle of a street to protect a crosswalk. After the crash, Palmer said, people were left with the question — how could this have been avoided? The city’s growing efforts could provide part of the answer.

The victims out celebrating that March night were young and a mix of ethnicities. The accident brought the dangers of New Orleans roads into the spotlight, but the fact is, in New Orleans, as across the country, dozens of pedestrians and bicyclists die on the road every year, and most of the deaths go unnoticed. “An older African American man, [that’s the kind of person] that people don’t even think about walking or biking,” said Henig Bell. Still, he says, those bicyclists, often on their daily commute, are among the most likely to be killed. Black people, roughly two-thirds of the city’s population, account for nearly half of all cycling deaths in the city according to a report from the National Complete Streets Coalition and Bike Easy.

Henig Bell says the reasons for that are simple. At last count, about 20 percent of New Orleans households didn’t have access to a car, and those households tend to be in poorer, largely black neighborhoods. Crashes are common on the busy thoroughfares that separate the Central Business District and the tourism-heavy French Quarter from some of these neighborhoods. “There’s a lot of hit-and-runs, crashes with people driving into town to come party,” Henig Bell said. “And all of these deaths feel invisible.”

Transit officials say the city will begin to address those disparities by targeting improvements along the most dangerous routes. The plan unveiled in July proposes adding protected lanes to a key bridge between the predominantly black Lower Ninth Ward and the rest of the city, where cyclists currently share a shoulderless, 35-mph lane with cars —although the city has yet to say when the connection will be completed.

New Orleans sometimes feels more like a small town. Everyone I spoke to seemed to have a personal connection to the crash, which took place just as crowds were headed away from one of the weekend’s bigger parades. (The previous year, a driver crashed into a crowd at the same parade, but nobody was killed.) Hynes was a graduate of Tulane Law School visiting former classmates. Walls was deeply involved in the city’s nonprofit world.

“For many people, it really highlighted that these are everyday issues,” Henig Bell said.

Friends of Walls and Hynes are working to make New Orleans more pedestrian friendly in the weeks ahead of Mardi Gras. Walls was on the board of the Krewe of Red Beans (krewes, a cross between social clubs and charitable organizations, put on Mardi Gras parades), which is lobbying the city to create a network of car-free thoroughfares during carnival season. Devin De Wulf, the krewe’s founder, thinks that if such thoroughfares had existed earlier this year Walls and Hynes would have taken them.

“This is a life-saving effort,” De Wulf said of his krewe’s push. “Would you rather have someone die on a bicycle, versus someone being inconvenienced for five minutes of their day?”