Trump's false or dubious 9/11 claims go back to the day of the attack. But no one ever saw him at Ground Zero 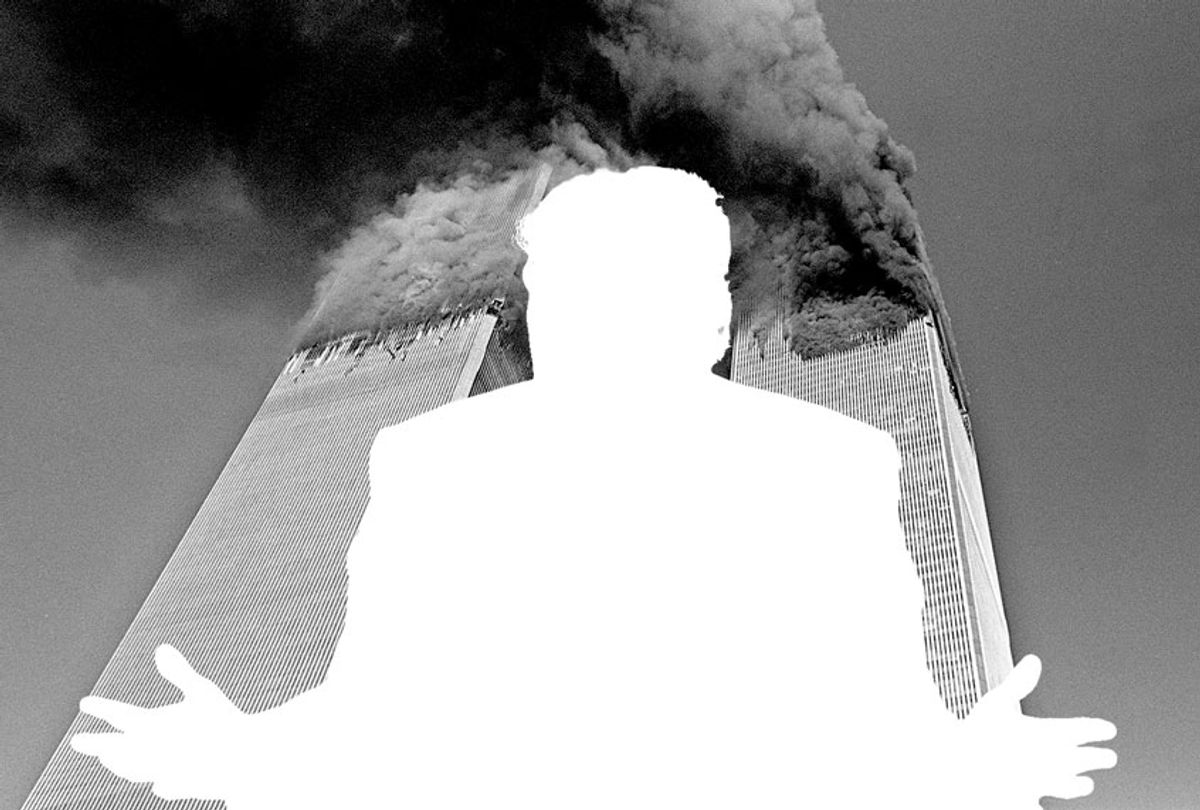 President Trump marked the 18th anniversary of the 9/11 attacks at a Pentagon ceremony where he revived an evidence-free claim that he rushed to help out at Ground Zero following the attack on the World Trade Center.

"I was looking out of a window from a building at Midtown Manhattan directly at the World Trade Center when I saw a second plane at a tremendous speed go into the second tower,” Trump said Wednesday. It was then that I realized the world was going to change. I was no longer going to be, and it could never, ever be that innocent place that I thought it was.”

He went on to claim that he and his “men” headed to Ground Zero to help.

"Soon after, I went down to Ground Zero with men who worked for me to try to help in any little way that we could," he claimed. "We were not alone. So many others were scattered around trying to do the same. They were all trying to help."

Trump made a similar claim earlier this year while surrounded by Ground Zero first responders at the Rose Garden.

“I spent many months there myself, and I never witnessed him,” Alles told the outlet. “He was a private citizen at the time. I don’t know what kind of role he could have possibly played.”

Trump in the past has also claimed that he saw people jumping from the towers with his own eyes, despite being at Trump Tower, which is four miles away from the World Trade Center site.

Trump’s claim goes back to at least Sept. 13, 2001, when he told a German television station several blocks away from the Ground Zero site that he had “a lot of men” at Ground Zero.

“We have over 100 and we have 125 coming,” he claimed at the time. “So we’ll have a couple of hundred people down here. We will be involved in some form helping to reconstruct.”

Alles said he certainly would have noticed if Trump had brought a crew that size.

“There would be a record of it,” he told Politifact. “Everybody worked under direct supervision of the police and fire department and the joint commander for emergency services. Is there a chance he was ever down there by himself and I didn’t know it? It’s possible, but I know of no one who ever witnessed him there."

No images of Trump’s help at Ground Zero exist. Aside from two interviews he did blocks away from the actual site in the days after the attacks, the earliest publicly available photo of Trump at the Ground Zero site was taken on Sept. 18, when he spoke outside the New York Stock Exchange.

“Donald Trump was absolutely not a first responder by any standard definition,” he said. “If we’re defining it as the first wave of people who arrived at ground zero to provide help, he was not in that wave.”

O’Brien said that there was no way Trump could have sent more than 100 of his men to the site because at the time the Trump Organization was “a little bit over a dozen people.”

“He’s very comfortable propagandizing that event for political purposes,” O’Brien said. “Even in the face of tragedy, he can’t help but self-promote and self-aggrandize.”

The fact-checking site Snopes investigated Trump’s claim last year and found no evidence to support his story. The White House and Trump Organization did not respond to the outlet’s request for any evidence backing up Trump’s claim.

It’s not the first time Trump’s dubious 9/11 claims have fallen apart. He famously falsely claimed that he witnesses “thousands and thousands” of Muslims in New Jersey cheering that the World Trade Center came down. He has never retracted that claim.

So what was Trump actually doing on 9/11? In the immediate aftermath of the attack, he was interviewed by New Jersey television station WWOR and used the occasion to brag that his building at 40 Wall Street had just moved up in the rankings for the tallest in downtown Manhattan.

“There was a period during which Trump's was the tallest building in Lower Manhattan, but it wasn't immediately before the construction of the World Trade Center in the 1970s,” wrote The Washington Post’s Philip Bump. “It was for about two years in the 1930s, well before Trump owned it — or was born.”