Eighteen years and counting: Are we ever getting out of Afghanistan?

After the collapse of his peace deal with the Taliban, Trump’s answer seems to be no. So we've learned nothing 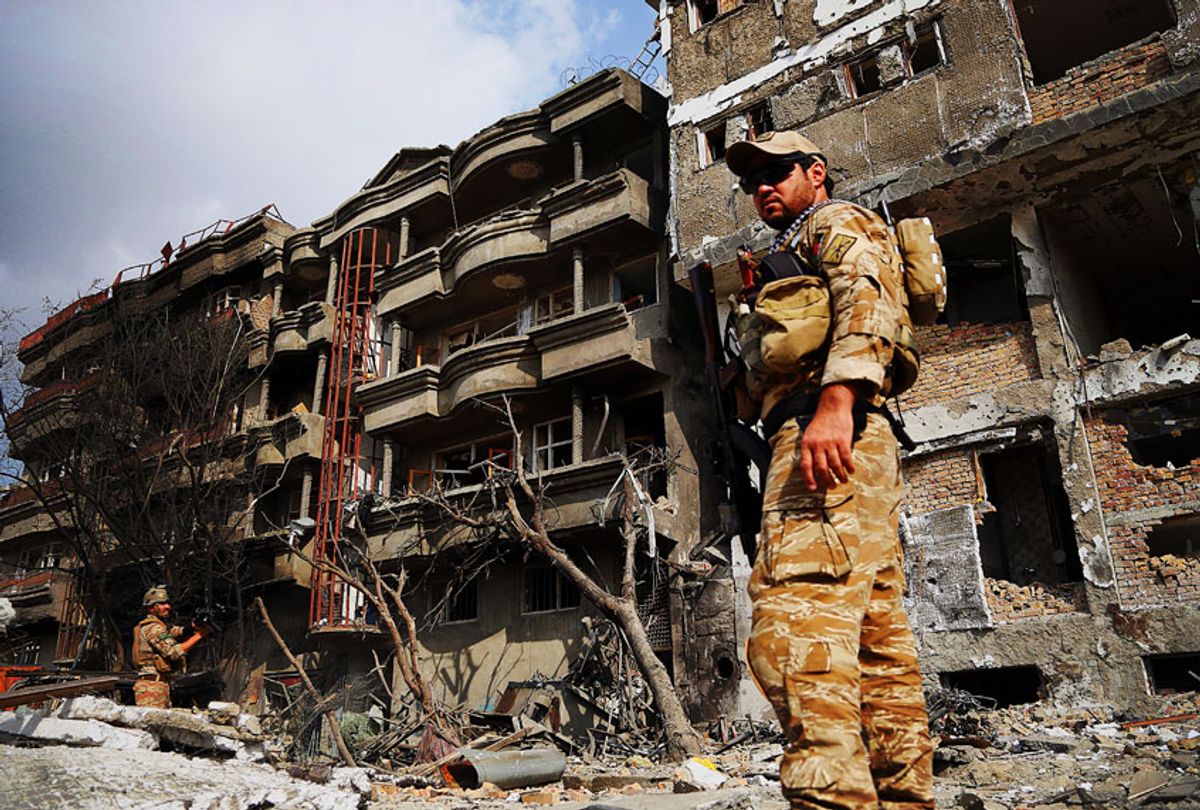 It’s been a week since Donald Trump canceled the peace talks with the Taliban that were supposed to happen at the presidential retreat at Camp David last weekend. Negotiations between the United States and Taliban leaders had been going on in Doha for nearly a year. Former U.S. ambassador Zalmay Khalilzad led the U.S. delegation through nine rounds of talks and produced an “agreement in principle” for the U.S. to pull about 5,000 troops out of Afghanistan in return for the Taliban’s assurances that the country would not become a haven for terrorist groups like ISIS and al-Qaida.

After 18 years,  more than 2,000 American soldiers dead and 20,000 wounded, that seems like a reasonable goal, don’t you think? Especially considering that keeping Afghanistan from being a safe haven for al-Qaida terrorists was the reason we invaded in the first place.

So what are we doing walking away from an agreement of any kind that would reduce the number of troops we have in Afghanistan and potentially lead to an end to that misbegotten war? Well, we could ask the president’s national security adviser, except Trump doesn’t have one of those anymore, having fired his third one, John Bolton, a couple of days after ending the peace talks. Or we could ask Secretary of State Mike Pompeo, who presumably had something to do with the peace talks, since they were an exercise in diplomacy. But we don’t have a secretary of state. What we’ve got instead is a portly, grinning yes-man whose major accomplishment in office so far seems to be having survived longer than the portly yes-man who preceded him, Rex Tillerson.

Or we could ask the secretary of defense, Mark Esper, but he’s only been in office for about a month, and is probably still having a hard time finding his way around the E-Ring of the Pentagon. We could ask a couple of the other guys who have served as acting secretaries of defense over the last six months or so, but they weren’t around for long, and nobody can remember who the hell they were, so why bother?

Do you see where I’m going with this? We’ve got 14,000 troops still serving in Afghanistan and there is nobody in Washington who’s been around long enough to be able to tell you where they are on the ground over there, or what they’re doing, much less why they’re still there.

It’s an incredible state of affairs. There were more stories this week about troops staying at Trump’s Turnberry golf resort in Scotland during refueling stops than there were about the cancellation of the Afghanistan peace talks. That’s what the 18-year war in Afghanistan has become: an afterthought, just another item in a long list of Trump’s capricious, spur-of-the-moment tweets.

Oh, Trump tweeted something about the China tariffs? What did the market do? He’s taking after some television actress who said something nasty about him? The next thing you know he’ll be tweeting about the size of the crowd at his inauguration, or claiming that it was him, not Hillary, who really won the popular vote in 2016.

Meanwhile, there doesn’t appear to be anyone in any position of authority or responsibility in the Trump administration (or in the two administrations that preceded it, for that matter) who is giving any thought at all to the folly of thinking that we should be the ones in charge of picking which of the warring factions will end up running Afghanistan. That’s the original sin of it all, thinking that because we can put thousands of soldiers on the ground in Afghanistan and back them up with about a trillion dollars, that we can decide who wins and who loses over there.

Trump got his panties all in a wad last week because the Taliban set off a car bomb last week in Kabul that killed an American soldier and 10 Afghan civilians. Where the hell has he been? A couple of weeks before that, a series of bombs exploded in the eastern Afghan city of Jalalabad, wounding 66 people, including 10 children. The day before, a bomb planted by ISIS exploded at a wedding hall in Kabul, killing 66 and wounding more than 200.

What does Trump think we can do about the bombings in Afghanistan? We’ve already got 14,000 troops over there. What does he want to do now? Throw a few more thousand into the mix and see what happens? Suicide bombings, truck bombings, car bombings – it’s the way they fight the war amongst themselves in Afghanistan. It’s almost as if we’re not even there. They just go on bombing each other, and sometimes one of our soldiers gets hit and killed. But the fighting among Afghans over who is going to end up running things goes on. Nothing we do over there is going to stop it.

I got a close-up look at the “war” we were waging in Afghanistan when I was over there 15 years ago. One week, I was down in Kandahar on an American base camp surrounded by soldiers. The next week, I was in a little four-wheel-drive truck with a driver and a translator and a photographer, stuck in a traffic jam on the road from Kabul to Jalalabad. It was 3 o’clock in the morning. Two of the vehicles that were holding up the traffic were buses blocking the way at the bottom of a steep gorge. We had to get them moved out of the way if we were going to make it to Jalalabad. The buses were filled with armed Taliban fighters going toward Kabul.

There were no American soldiers anywhere near us. Not one. I had a satellite phone, but there was no one I could call in Kabul with a warning, even if the phone was working, which it wasn’t, because it couldn’t pick up a satellite signal from the bottom of the narrow river gorge. The Taliban were going one way, and we were going the other. It took some maneuvering, but finally we got the Taliban buses moved and we continued on our way. The next day, I heard in Jalalabad that the Taliban had shot up a marketplace in Kabul. I was pretty sure the guys we saw on those buses blocking our way in the gorge were the ones who did that attack in Kabul.

What good were the thousands of American soldiers on base camps in Kandahar and Kabul and Khost and Jalalabad and Bagram? Could they have stopped the  Taliban attack?

Trump blew up the peace talks with the Taliban last week in a fit of pique, just so he could tweet out to his base that he did it. Big, strong, macho Trump. Nobody’s going to get away with killing one of our soldiers while I’m negotiating! I’ll show them! I’ll send out a tweet, and I’ll cancel!

May as well try tweeting against the Taliban. Hell, his tweets frightened an entire American political party into surrendering to him. Maybe they’ll work in Afghanistan. Nothing else has.