Even better, the researchers didn't take the silk from spiders' webs, but from synthetic DNA 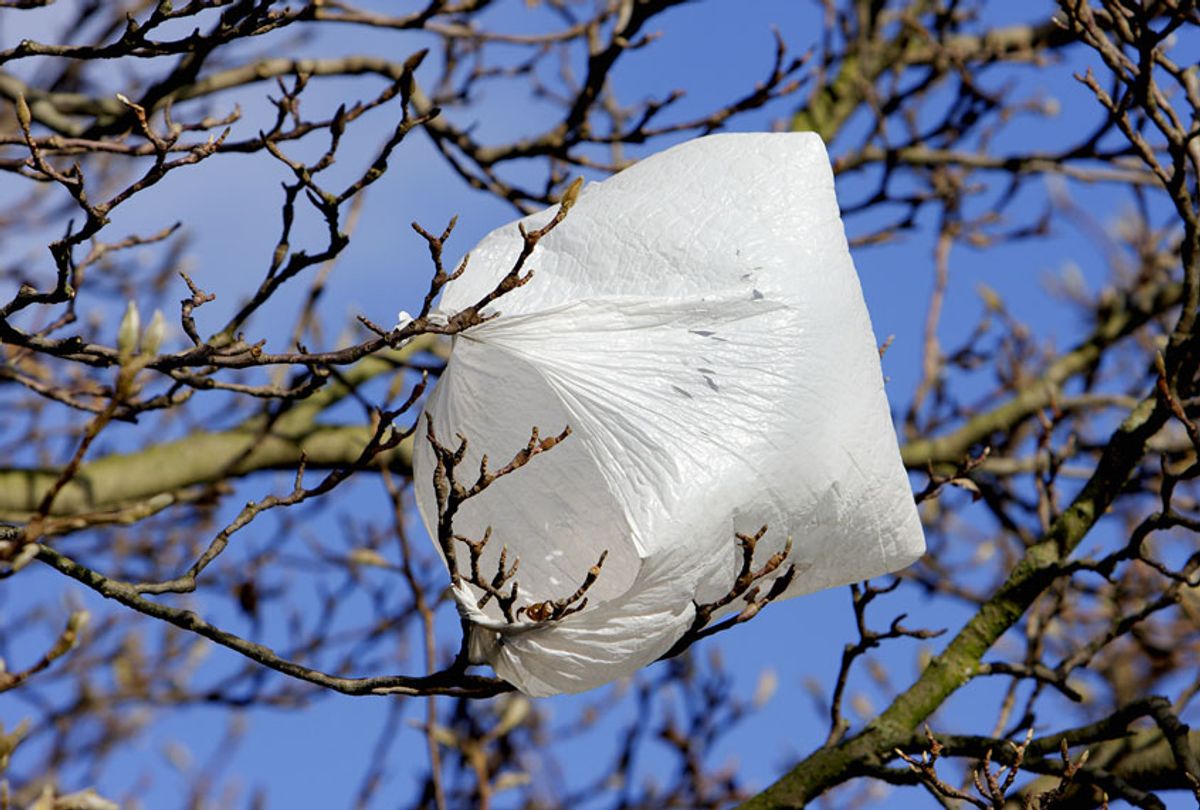 White plastic bag caught up in branches and billowing in the breeze. Plastic bags are wind-distributed, which explains why they are widespread in the London (UK) countryside. (Getty Images/Whiteway)
--

It is horrific to think that in hundreds, even thousands of years, Earth will likely still be littered with the plastic we use today.

This is because most plastic is manufactured from petroleum and carbon-based polymers that are too durable to breakdown naturally. Since plastic can also only be recycled a finite number of times, and since single-use plastics are still prolific, the probability of plastic pollution littering the world’s oceans and occupying landfills centuries from now is high.

Researchers have warned that there could be more plastic than fish in the world's oceans by 2050 if the current rate of plastic production doesn’t stop, which is why many environmentalists are pushing for adoption of a truly biodegradable plastic alternative. A new study published in Science Advances proposes a tantalizing alternative: faux-plastics made out of spider silk and wood fibers.

In order to produce this novel material, scientists at Finland's Aalto University and the Finnish VTT Technical Research Centre started with ordinary birch tree pulp. Then the birch tree pulp was broken down into tiny fibers called cellulose nanofibrils. Spiderweb silk was added as an adhesive.

“We used birch tree pulp, broke it down to cellulose nanofibrils and aligned them into a stiff scaffold,” Research Scientist Pezhman Mohammadi from VTT explained in a statement. “At the same time, we infiltrated the cellulosic network with a soft and energy dissipating spider silk adhesive matrix.”

Don't fret over spiders being tortured for their webs: the spiderweb silk used was not actually taken from spiderwebs. Rather it was produced via bacteria with synthetic DNA.

“Because we know the structure of the DNA, we can copy it and use this to manufacture silk protein molecules which are chemically similar to those found in spider web threads,” Aalto University Professor Markus Linder said in statement. “The DNA has all this information contained in it.”

Pezhman said the composite material was a product of “protein engineering.”

“In the future, we could manufacture similar composites with slightly different building blocks and achieve a different set of characteristics for other applications,” Pezhman said. “Currently, we are working on making new composite materials as implants, impact resistance objects and other products.”

The researchers wrote in the study that this research paints an optimistic future for sustainable material.

“It seems that coacervation and the underlying processing possibilities for conformational switching offered by protein coacervates are not yet sufficiently appreciated and understood in materials science,” the authors wrote.

Biodegradable plastic has been on the market for several years, but as various reports have stated, it does not actually degrade. In 2015, research published by the United Nations Environment Program (UNEP) entitled Biodegradable Plastics and Marine Litter. Misconceptions, Concerns and Impacts on Marine Environments, found that complete biodegradation of plastics rarely occur even in products labeled “biodegradable.”

“Once in the ocean, plastic does not go away, but breaks down into microplastic particles,” UNEP’s Executive Director Achim Steiner in a press release at the time. “This report shows there are no quick fixes, and a more responsible approach to managing the lifecycle of plastics will be needed to reduce their impacts on our oceans and ecosystems.”

Microplastics are particles of plastic that are smaller than five millimeters. The exact quantity of microplastics in the oceans is unknown, though they have been found in every one of Earth's oceans, including in the deepest and most remote parts. Not only is microplastic a profound threat to marine life, but also to human health.

“We have put so much plastic into the environment at this point that it has gotten into everything around us,” John Hocevar, Oceans Campaign Director of Greenpeace, explained to Salon in July. “Plastic is in the food we eat, the water we drink, and the air we breathe. Everywhere scientists have looked, they have found plastic, from the Arctic to the Antarctic, and from the tops of remote mountains to the bottom of the deepest trench in the Pacific.”

It is not so much the particles of plastic, but the chemicals that are commonly used in packaging, which are carcinogens and endocrine disruptors.

“It is difficult to say for sure how many people's reproductive health problems or cancer diagnoses stem from our widespread use of plastic,” Hocevar said. “We know that these chemicals are dangerous, and we know they are entering our bodies through plastic packaging.”