Something the anti-Trump Republican needs to be asked about 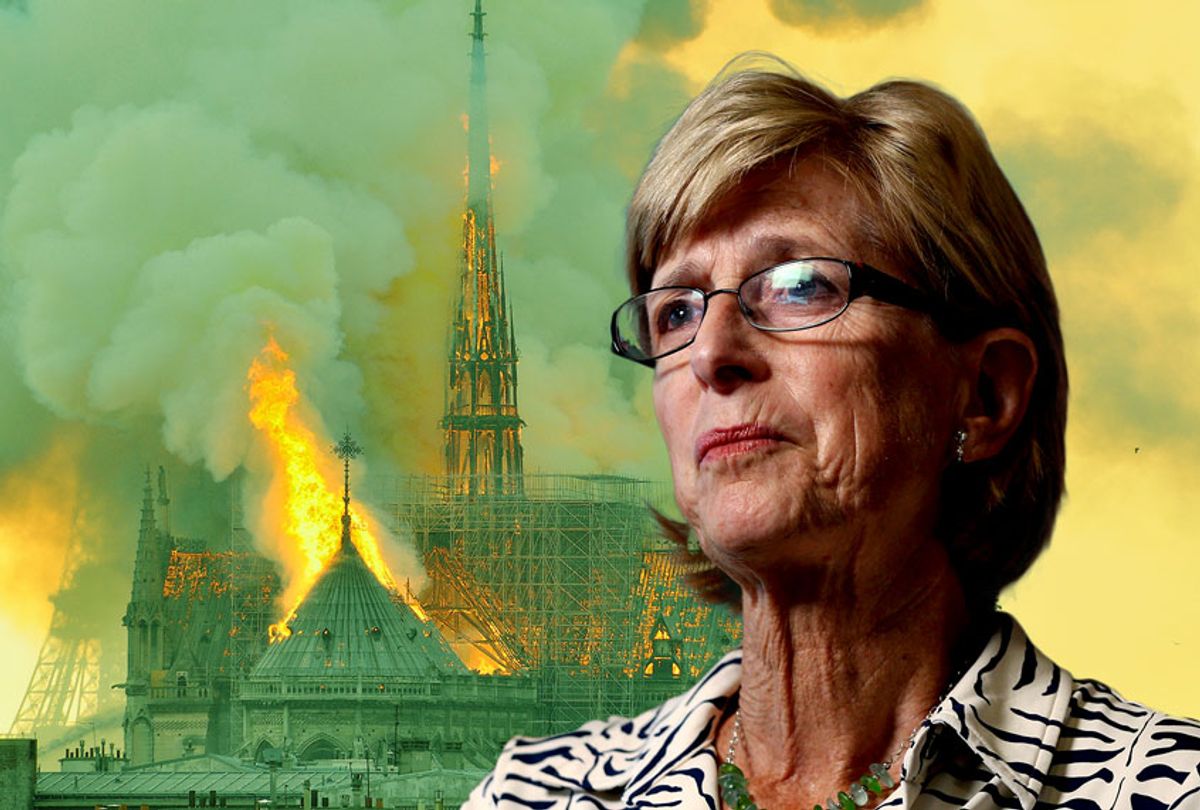 Sunday’s New York Times reporting on the French government’s cover up of the serious public health dangers from the Notre Dame fire is sadly reminiscent of former New Jersey Governor and EPA Administrator Christie Todd Whitman’s post 9/11 declaration that the air in lower Manhattan was safe to breathe.

Writing of the official response to the environmental contamination aspect of the Paris disaster, the Times reported that the government’s “delays and denials have opened the authorities to accusations that they put the reconstruction of the cathedral….ahead of the health of thousands of people.”

In the case of the Notre Dame fire, the significant occupational and public health risk can be traced to the incineration of 400 tons of lead found in the cathedral’s roof and iconic spire. The Times noted that in dozens of public spaces, plazas and parks lead levels were 60 times the national safety standard for the metal that’s been linked to brain damage in small children.

For the greater good?

The scale of the two events are not comparable. But both are instances where governments concealing environmental hazards grew out of a paternalistic rationale that preserving continuity and calm trumped the truth and public health.

Whether it be the anxiety over the loss of face for not rebuilding Notre Dame fast enough, or the Bush administration’s desire to ‘send the terrorists a message’ by quickly opening Wall Street, these deceptions create armies of unwitting casualties those same governments will try and disown.

Or, so history tells us.

Three days after the 9/11 attack it was former New Jersey Governor Christie Todd Whitman, then head of the Environmental Protection Agency, who told reporters that  “the good news continues to be that air samples we have taken have all been at levels that cause us no concern.”

That upbeat and inaccurate statement was uttered as the fires at the World Trade Center site continued to burn and smolder until just before Christmas.

Two years after 9/11, a review by the EPA Inspector General concluded   EPA  “did not have sufficient data and analyses to make such a blanket statement,” as “air monitoring data was lacking for several pollutants of concern.”

Moreover, the OIG learned that it was President George W. Bush’s White House Council on Environmental Quality (CEQ) that heavily edited the EPA press releases “to add reassuring statements and delete cautionary ones.”

Even though samples taken indicated asbestos levels in Lower Manhattan were between double and triple EPA’s limit, the CEQ downplayed the readings as just “slightly above” the limit the EPA IG found.

And when the EPA’s Inspector General tried to identify who had actually written the misleading press statements they  “were unable to identify any EPA official who claimed ownership” because investigators were told by the EPA Chief of Staff  that “the ownership was joint ownership between EPA and the White House” and “final approval came from the White House.”

According to the Scientific American, the WTC cloud of dust was the result of the collapse of the WTC complex and the 1,000 degree Celsius fires that ensued, fed by 91,000 liters of jet fuel along with the partial incineration of 10,000,000 tons of pulverized building materials.

The WTC complex debris included heavy metals, like lead, hundreds of tons of asbestos, and polychlorinated biphenyls (PCBs) that “become even more toxic when burned at high heat, and glass fibers that lodge in the lungs,” reported the Scientific American.  “The levels of dioxin measured in the air near the smoldering pile ‘were the highest ambient measurements of dioxin ever recorded anywhere in the world,’ levels at least 100 times higher than those found downwind of a garbage incinerator, according to an analysis published by EPA scientists.”

At the 18th anniversary mark since the attack, according to the  statistics from the World Trade Center Health Program, we are officially approaching the sobering moment when the number of people who have died from their WTC  toxic exposures will surpass the close to  3,000 that died that day in the terrorist attack.

The awful truth is we could probably have already passed that number. Of the half-million people that experts estimate were exposed to the deadly WTC air and dust, just one in five are getting the screening that comes with participating in the WTC Health Program.

When the program was enacted by Congress a kind of caste system was built into the WTC Health Program.  The 90,000 first responders automatically were entitled to be screened annually, whereas survivors, the 400,000 local residents, students, workers and commuters who came in from surrounding states like New Jersey, have to be symptomatic first to get into the program, which can be too late.

No surprise, of those 90,000 who were part of the 9/11 response and clean-up, 76,050 participate in the World Trade Center Health Program for first responders which includes that free, annual screening.

By contrast, only 21,636 survivors of the 400,000 people that experts estimate lived, worked and went to school in the WTC contamination zone are participating.

Dr. Joseph Fennelly, who served for thirty years as the chair or co-chair of the Medical Society of New Jersey’s biomedical ethics panel, said in an interview that “from an ethical standpoint there’s no question” that survivors should have the same unfettered access as first responders to regular screening without having to be symptomatic as a prerequisite.

“You absolutely want to try and catch cancers before they are symptomatic,” he said. “This is part of the zeitgeist of medicine moving towards prevention.”

According to the World Trade Center Health Program website there are 13,298 people with WTC linked cancers. 9,405 of them are first responders, like cops and firefighters while 3,893 are categorized as survivors.

At a June hearing of Rep. Jerry Nadler’s House Judiciary Committee, the Congressional panel was told that there could be as 20,000 additional World Trade Center cancers. According to the World Trade Center Health Program website, 55,000 individuals have been certified for at least one WTC related health condition. According to WTC Health Program over 35,000 individuals suffer from two or more certified conditions.

For the last three years as a reporter with the Chief-Leader newspaper, which covers the local, state and federal civil service, I have been writing with great regularity about the ever widening circle of 9/11 WTC loss.

This population includes 20,000 former New York City school children sent to 29 schools in the WTC hot zone after Governor Whitman’s assurances. There are thousands of city, state and federal workers who worked in lower Manhattan, who never went to the WTC, but came to work every day because their government said the air was safe to breathe.

Now, they are getting sick and some are dying.

It occurs to me that there is a well-established pattern where government resists recognizing the ravages of its own malfeasance or deceit, especially if there is a potential financial liability. Take the obfuscation and denial over the impact of agent orange on Vietnam era vets, combat related post-traumatic stress, or the deadly health impacts on soldiers it had charge into above ground atomic blasts.

Initially, in 2002, when James reported his medical condition to the NYPD, they denied his claim which meant even as his health was rapidly deteriorating, he had to report for duty. He ended up bedridden and dependent on an oxygen tank to breathe. Despite aggressively looking for answers to what was causing his rapid deterioration, physicians were at a loss to explain how a formerly robust man, in the prime of his life, could become so sick so quickly.

Two years after the attack, he was diagnosed with Black Lung Disease. In 2006 the 34-year-old died leaving his parents to raise his four-year-old daughter.

In April 2006, Dr. Gerard Breton, a coroner from Ocean County, made the direct link in his autopsy report between the NYPD detective’s hundreds of hours of duty at the WTC site to his cause of death.

But Breton’s findings were contradicted by New York City’s Chief Medical Examiner, who concluded that Zadroga had died from drug use.

“Our chief medical examiner believes that the deceased was using some of his drugs in a manner for recreational drugs,” Mayor Bloomberg told reporters at the time. “We wanted to have a hero. There are plenty of heroes. It’s just in this case, the science says this was not a hero.”

The Zadroga family sought out a third opinion, that of Dr. Michael Baden, himself a former New York City Medical Examiner and the chief forensic pathologist with the New York State Police. Baden backed the initial finding by the New Jersey doctor that established the WTC linkage to Zadroga’’s death.

Zadroga’s name went from being dragged through the mud of tabloid inuendo, to one of perpetual honor when his name was memorialized with the landmark 9/11 Health and Compensation Act that now bears his name.

There are just going to be so many more names.