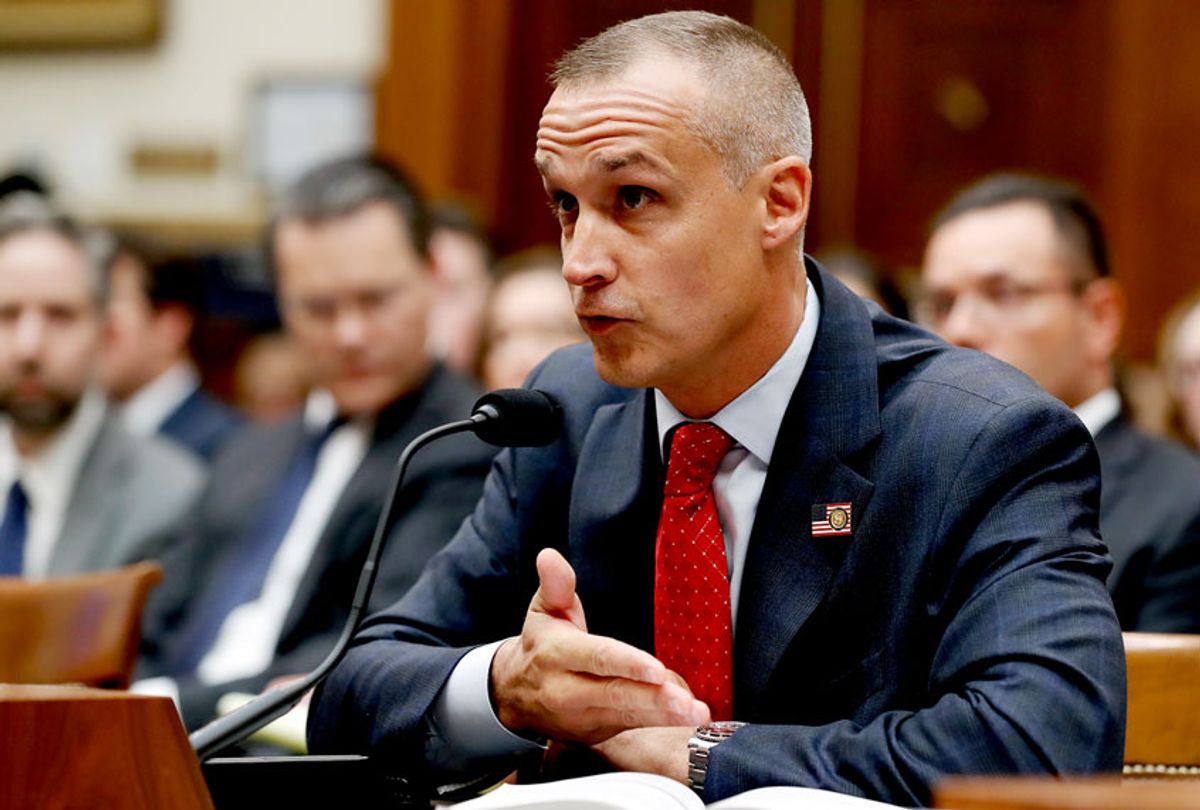 Corey Lewandowski, former campaign manager for President Donald Trump, references a copy of the Mueller Report that he requested to be brought to him, as he testifies to the House Judiciary Committee Tuesday, Sept. 17, 2019, in Washington. (AP Photo/Jacquelyn Martin)
--

On Tuesday the House Judiciary Committee held the first public hearing to be billed as part of an "impeachment inquiry." The committee called former Trump campaign manager Corey Lewandowski and former White House aides Rob Porter and Rick Dearborn to testify about various episodes in the Mueller report. Unfortunately, if unsurprisingly, the White House blocked the appearances of Porter and Dearborn, saying they were "absolutely immune" from congressional testimony, a stonewalling tactic they have used with other current and former staffers who have been called to testify before Congress.

That left Lewandowski. The fact that he had never been employed by the administration forced the White House to get creative with their interference. Executive branch officials ended up informing the committee that he was only authorized to speak about what was specifically in the Mueller peport and nothing else. The White House has no authority to muzzle a private citizen who is under subpoena to appear before Congress, but Lewandowski was more than happy to follow orders.

The hearing started out rough. Lewandowski swaggered into the room from the Republican side. Two White House lawyers ostentatiously sat right behind him. There was no question about his strategy for the hearing: Hail Trump, mock the process, treat the Democratic members like lackeys and waste as much time as possible playing dumb about the Mueller report. He was quite successful, as far as it went. The committee did the usual five-minute round robin with the Republicans feeding him softballs and Democrats being irritated and flummoxed by Lewandowski's lack of cooperation and aggressive, smug attitude. (Anyone who has ever had to deal with a sarcastic, obstreperous teenager could certainly relate.)

He put on quite a performance, refusing to answer any questions without a direct citation from the report. When he was provided with a copy, he demanded that he be directed exactly to the page and sentence in question, at which point he would finally agree that he had indeed said what it said he had said.  It was absurd.

The pundits all proclaimed the first session to be a disaster, with Lewandowski declared the winner by TKO. But they may have been missing some of the forest for the trees. The committee got Lewandowski on record repeatedly saying that Mueller's report was accurate.

And it's important to acknowledge just what it was that he was confirming — that the president of the United States had told him to secretly inform former Attorney General Jeff Sessions to reverse his recusal on the Russia investigation, and then to limit it only to future elections. It was pretty obvious that Trump would not have tasked his former campaign manager with this mission, rather than some other member of his staff, if he hadn't wanted it to be kept off the record. His White House counsel, Don McGahn, had already made it clear that this wasn't kosher.

Lewandowski put his notes in a safe and didn't follow through, telling the committee he thought it was more important for him to go on vacation with his kids. More likely he realized he was being dragged into something potentially illegal and hoped Trump would forget about it. He didn't.  At that point, Lewandowski handed off the message to Rick Dearborn who has claimed he never spoke to Sessions about it.

This was one of the 10 events in the Mueller report that most legal observers regard as prima facie evidence of President Trump obstructing justice. So despite the circus theatrics, it was fruitful to have Lewandowski on the record confirming all those details. They can clean it all up in a written article of impeachment.

As it turns out, though, the morning session with all the committee members having their say was just the warm-up act. In its vote last week, the committee had passed a rule allowing staff counsel to pose questions for half an hour in these public impeachment hearings. Barry Berke, a lawyer for the Democratic members, then took over the hearing and it was like night and day.

Most of the press has focused on the moment when Berke cornered Lewandowski by showing that he lied repeatedly on television about this incident and his interactions with the Mueller team. After much hemming and hawing his explanation was "I have no obligation to be honest with the media because they are just as dishonest as everybody else." (Who else? )

But Berke teased out another colorful detail that has passed unnoticed. Despite the White House order that Lewandowski shouldn't speak of any conversations with the president other than those specifically referenced in the Mueller report, it turns out that he has written a couple of books one of which is called "Let Trump Be Trump: The Inside Story of His Rise to the Presidency." It features many conversations with the president, which the White House apparently had no objections to publishing. One of the anecdotes has Trump suggesting to Lewandowski that he might join the administration at the level of Jared Kushner to run the Russia 2016 election interference investigation.

As Berke went on with his relentless fusillade of questions, Lewandowski became increasingly distressed.  He had repeatedly claimed that he had never read the Mueller report. As Berke's 30 minutes were almost done, he asked Lewandowski whether he took the report lightly, reminding him that he had been autographing copies of the report just last week, while joking that he couldn't sign every page where his name appeared because there were too many of them. Lewandowski became upset and said:

I'm outraged at your characterization of my statements. Never have I said that, never have I called into question the validity of the Mueller Report or alluded to the fact that I wanted Russia to interfere ...

Every time one of the principal figures confirms the Mueller report, another impeachment count gets its wings.

Whereas Lewandowski had been cocky and derisive toward the members in the early session, he was crumbling after 30 minutes of solid questioning designed to show him as the weasel he is. It was the most effective line of questioning we've seen in a hearing in ages and it shows how important it is that Democrats allow staff lawyers to interrogate the witnesses rather than having members of Congress get cut off after five minutes, only to move on to another questioner from the other side and a completely different subject.

If you have 30 minutes to spare, give it a look:

Judiciary Committee chair Jerry Nadler, D-N.Y., reminded Lewandowski that his refusal to answer questions was obstructing legitimate oversight of the president and reminded him "that Article 3 of the impeachment against President Nixon was based on obstruction of Congress." Trump is committing new impeachable offenses every day, not the least of which is this epic stonewall.