Mike Pence spent $600,000 on limousine rides so he could stay at Trump's resort in Ireland. Republicans don't care 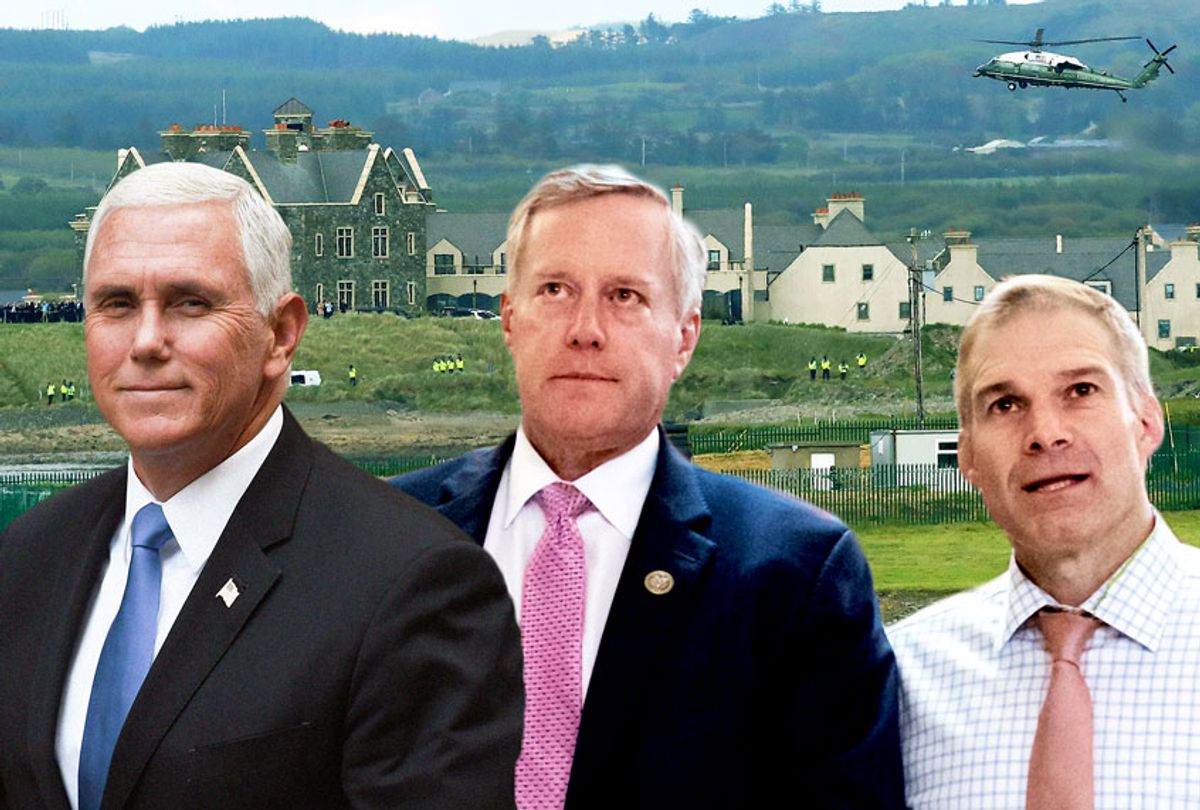 Vice President Mike Pence's trip to Ireland — or more precisely his curious stay at one of President Trump’s hotels — has prompted multiple congressional probes. But the Democrat-led oversight investigations have already drawn complaints and pushback from Trump’s loudest Republican defenders on Capitol Hill, including the ranking member of the House Oversight Committee.

Democrats in both the House of Representatives and Senate have sent official letters of inquiry to the vice president’s office seeking specific information on the costs of Pence's recent stay at Trump International Golf Club in Doonbeg, Ireland. They have imposed a Sept. 19 deadline for the administration and the Trump Organization to turn over relevant documents. Democrats have raised concerns that Pence’s stay at Trump’s resort could have violated the emoluments clause in the Constitution. They’ve asked for details like the cost of the stay, Secret Service protection, and comparable rates for hotels nearby as well as across the country in Dublin, where Pence held meetings with Irish officials and business leaders.

The vice president’s decision to stay at Trump’s resort can hardly be defended as one of convenience, as Pence previously suggested. Doonbeg is in County Clare on the west coast of Ireland, nearly a four-hour drive from most of Pence’s scheduled meetings in Dublin. According to an analysis by the government watchdog group Citizens for Responsibility and Ethics in Washington (CREW), Pence’s stay cost taxpayers $599,454.36 in limousine service alone.

Before taking office, Trump promised he would step away from his business while in office. Instead, however, he has kept his stake in his companies. So expenditures of public funds like Pence’s stay at Doonbeg directly line Trump’s pockets. According to data collected by CREW, Pence has made more than 20 such visits to Trump properties since taking office. So has Treasury Secretary Steven Mnuchin, while Commerce Secretary Wilbur Ross has made 16 visits to Trump properties.

"Unfortunately, your travel to President Trump's golf club is part of a troubling trend," Sen. Gary Peters, D-Mich., the ranking member of the Senate's Homeland Security and Governmental Affairs Committee wrote in a letter to Pence. "Reports now claim that at least 24 of the 32 individuals who have served in the President's Cabinet have patronized Trump properties, including the Trump International Hotel in Washington, D.C. — another property owned by the President." Attorney General Bill Barr spent $30,000 to host a party at the Trump hotel in Washington.

More than two years into his term, the president continues to promote his properties with high-profile visits. Trump spent 295 of his first 956 days in office at his own hotels, according to NBC News. He recently proposed that the U.S. would host the 2020 G7 summit at Trump National Doral Golf Club outside Miami.

"The Doral and Doonbeg cases are just two of the many examples of the solicitation or receipt of foreign government spending to the benefit of the President's private financial interests," House Judiciary Committee Chairman Jerrold Nadler, D-N.Y., wrote in his own letter to White House Counsel Pat Cipollone and Secret Service Director James Murray. "While White House officials have repeatedly claimed it is easier for Secret Service and law enforcement to secure the President's resorts when he and the Vice President travel, there has been no confirmation by law enforcement or the Secret Service to support the practice of spending taxpayer dollars on the President's businesses."

He added: "The impact that the President's business interests may have on his official conduct and American foreign policy interests demands scrutiny by Congress — as does the use of taxpayer dollars on properties or businesses benefitting the president."

Republicans in Congress, for their part, have not only dismissed such concerns but have accused Democrats of a politically motivated witch hunt.

“Although you coordinated your attack with Judiciary Chairman Jerrold Nadler, you failed to consult with any Republican Members before demanding voluminous information from four separate entities – none of which bore responsibility for the lodging and accommodations in Ireland. We can only assume that these letters were the result of a rushed process to capitalize on news reporting about the Ireland travel, rather than responsible and deliberative oversight,” the letter said.

Even more curious than Republicans' complete lack of interest in such blatant self-dealing by the Trump administration is the fact that for some reason they are simultaneously up in arms about travel by their Democratic colleagues.

Jordan has also attacked Cummings over two committee staff trips to Mexico taken in August. Jordan complained that Republican members were not informed of the trips and said he was concerned Democrats were aiming “to delegitimize the administration’s border security efforts and vilify the men and women who protect our border.”

Republicans in Congress are clearly running interference for the Trump administration on all fronts, in a fashion that goes well beyond Beltway mantras about "politics as usual." Congress is supposed to perform critical oversight of the executive branch. Democrats haven’t directed the public into the streets over this stunning abdication of constitutional duty, which shows how ill-equipped our system is to handle outright corruption — and also how bewildered the majority party has become by this unprecedented president.