"Downton Abbey" is entirely unnecessary, and essential viewing for super-fans

Did we need another two hours with the Crawleys? No. But if you loved the PBS series, it provides a happy holiday 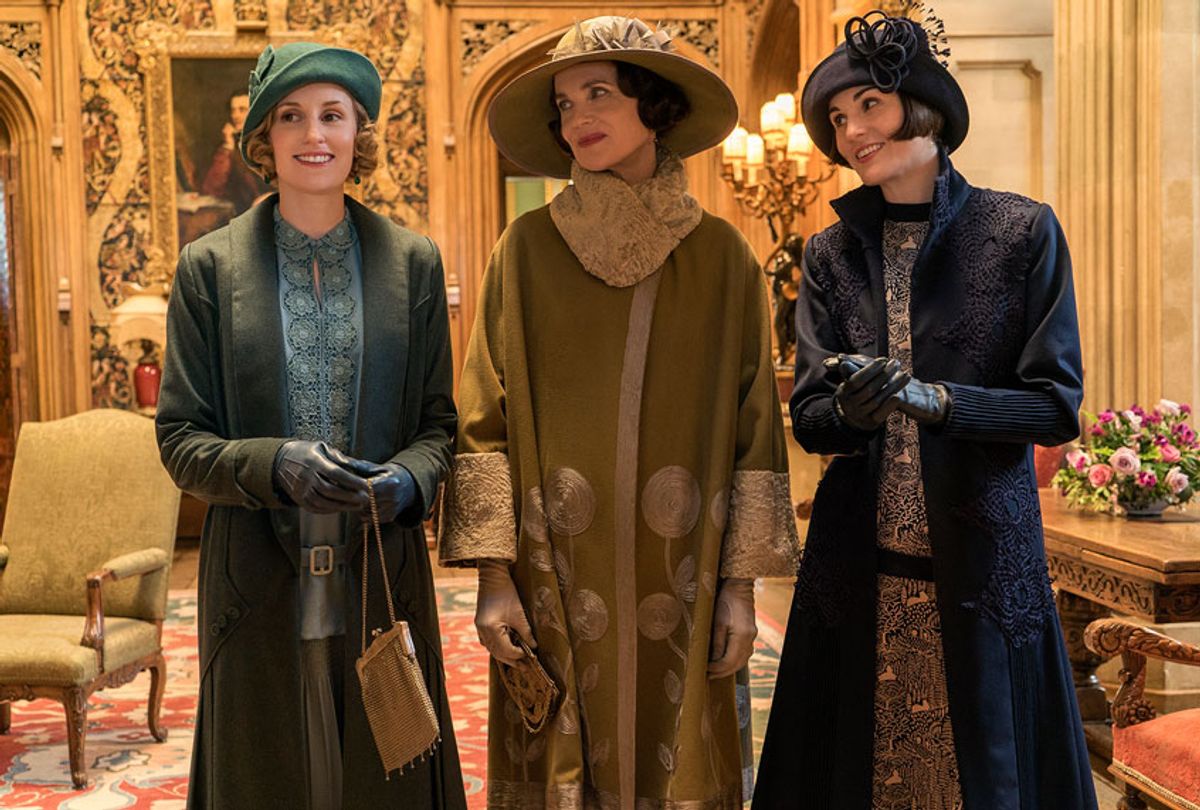 Best-loved TV series are like grand houses. For a time, we may gain entry and get comfortable. Provided we don’t excuse ourselves from the table entirely after some misfire that may occur while we're being entertained, we stay until the end. And long after the door closes permanently, these places stands tall in our memory’s landscape, inviting us back for occasional reunion visits by way of streaming services and broadcast repeats.

But “gone forever” is a relative concept in these days of reboots and continuations. Even a show like “Downton Abbey,” a period drama smash that ended about as nobly as such things can after six seasons, isn’t allowed a permanent rest. “Downton” aired its last episode stateside in 2016, but still turns up regularly in member station pledge drive rotations.

Never mind that series creator Julian Fellowes tied a merry bow on virtually every major storyline in its finale; talk of a theatrical follow-up has been kicking about since the drama closed up shop.

So here we are some three years the TV series ended, journeying back to Highclere Castle to inspect an entirely unnecessary addition: a theatrical release that hits theaters on Friday, written by Fellowes and directed by series veteran Michael Engler.

The main fuss in this beautiful folly concerns a visit from the royals in 1927: King George V (Simon Jones) and Queen Mary (Geraldine James) send word that they’ll be spending the night at Downton as part of their tour of the kingdom, which sends Downton and the surrounding village into a tizzy.

There’s a parade to be organized, silver to be polished, chairs to be arranged! No ball, thank goodness — that’s someone else’s problem, as we’re reminded several times throughout the episo — er, film.

“Downton Abbey” rejoins the Crawleys some two years after the series finale’s events, with Lord Robert Grantham (Hugh Bonneville) and Lady Cora (Elizabeth McGovern) ever the pillars of calm at the center of the action. They’re able to relax somewhat now that Lady Mary (Michelle Dockery) and her widower brother-in-law Tom Branson (Allen Leech) have assumed management of the house.

Though their positions and others are somewhat changed in the household structure, the characters who shape Downton’s upstairs-downstairs dynamic are more or less the same as they ever were.

Lady Edith (Laura Carmichael) and Mary still despise each other, but since Edith came into her own fortune and married into a title — she’s now the Marchioness of Hexham — she has less of a reason to behave like the Jan to Mary’s Marcia.

Thomas Barrow (Rob James-Collier) is now head butler at Downton – the faithful Carson (Jim Carter) retired, even though his wife Elsie (Phyllis Logan) remains ever-watchful over the household. Otherwise the stalwarts remain as they were  -- Mrs. Patmore (Lesley Nicol) is still plainspoken and intolerant of laziness, and lovingly pokes at her assistant Daisy (Sophie McShera).

Lady’s maid Anna (Joanne Froggatt) and the Lord’s valet John Bates (Brendan Coyle) still unofficially act as house mother and dad of the place. Molesley (Kevin Doyle) has bumbled off into a new livelihood, but remains a well-meaning idiot who only gets socially clumsier when word of the royal visit gets around.

However, the descent of the highest of high society upon the manor also humbles Downton’s denizens — or in some cases, outright insults their pride, beginning with Barrow, whom Mary bumps aside to bring Carson out of retirement when she fears the younger butler might not be up to the task of serving their Majesties.

This is a much kinder cut than the ones delivered by Buckingham Palace, which informs the household that the King and Queen travel with their own servants and more or less calls the staff a crowd of provincial bumpkins. Be assured that up with this they will not put!

Provided you’re still reading this — some of you may have gotten the gist ten paragraphs ago when you saw the words “entirely unnecessary addition” — you may be wondering whether “Downton Abbey” is worth paying the price of theatrical admission. The answer to that question depends on the depths of your addiction.

The “Downton Abbey” film exists entirely to serve hardcore fans who would spend time with the Crawleys through many generations. Their numbers are significant enough to have purchased more pre-release tickets than any other 2019 drama in terms of first-day advance sales, according to Fandango. Yes, pre-sales of “Downton Abbey” exceeded those of even “Once Upon a Time in Hollywood.”

And if it’s possible to view “Downton Abbey” in a theater full of likeminded folks overflowing with affection for these characters, do so. I happened to preview the movie as part of a special fundraiser for my local PBS affiliate, and there’s something heart-melting at witnessing an audience break out in applause at the mere sight of Carson walking up the graveled path toward the manor’s heavy double-doored entry.

The true reason for people to shell out cash for a two-hour, three minute episode is enjoy more time with Dame Maggie Smith’s Violet, the tart-tongued Dowager Countess, and to relish in her verbal jousts with her staunch frenemy Isobel Grey (Penelope Wilton).

Why Fellowes didn’t simply create a spin-off with these two characters is unfathomable, since their barbed exchanges provide regular injections of amphetamine into a movie that is by and large a very relaxed stroll through gilded rooms in the British countryside. But the gentlewomen are in rare form in this movie, and adding Imelda Staunton to the mix as Violet’s hated cousin Maud Bagshaw, the queen’s lady-in-waiting, sharpens their barbs.

Fans, then, should be very pleased with the movie. As for the casual “Downton” tourists, much as I hesitate to say it, incredible costumes and heavenly lighting probably won’t prevent feeling utterly lost and somewhat bewildered as to what all the fuss is about.

This is not to say the movie has no value beyond pure fan service, however. Indeed, its determined gentility and grace is its greatest sales pitch and a very attractive one to people searching for a box of calm amidst ever-renewing storms of anger fogged in uncertainty. There's a mote of tension that plays out with expediency, and a revelation that evokes about half of a sharp inhale. Other than these moments, "Downton Abbey" is basically designed to take the edge off of 2019 life, the visual equivalent of half a Valium chased by a flute's worth of champagne.

Entertainment is full of stories starring rich people, but few of them are kind or happy. “Succession” is about as close to a modern story of royalty as we’re likely to get, but its appeal is in watching the family patriarch’s endless manipulation of his children, ruling over his empire with threats and shame. The source of its appeal is equal parts schadenfreude and surface-level empathy.

Fellowes nurtures diametrically opposite emotions in “Downton.” Granted, a few allegoric parallels to modern societal ills stand out, particularly when Buckingham’s servants clash with Downton’s staff. The royal servants and chef thumb their noses at Carson, Mrs. Hughes and Mrs. Patmore, despite the fact that they’re all in the business of serving people fortunate enough to have been born royalty or aristocrats. They all have the same skills, but one group must somehow let the others know they’re a better caste of working class.

Beyond this, the main emphasis is to present aristocrats and royals as flawed gems whose humanity overrules their loyalty to tradition and society rules. That’s an unrealistic vision, but it also aligns “Downton” with our fantastic imaginings of how we’d want the royals to behave.

In this way, the movie manages to be outwardly apolitical while promoting a somewhat utopian vision of aristocratic rank as a soothing beacon of tradition, willing and able to evolve with the times and stubbornly plugging onward — not merely for the family legacy but to support the community surrounding it.

A character points out that Downton has survived wars and pandemics, and the family itself has weathered unspeakable tragedy and scandal. Yet they remain devoted to a way of life steadily being swept aside by progress, supporting the men and women who work for them and the villagers surrounding the manor. Generations will rise and fall, he says, but Downton will always be standing, solid and unmovable. With so many days leaving us with the sense of the world crumbling beneath our feet, there’s a solace in that which may be worth the cost of a movie ticket. The rest of us should be fine with waiting until this one-off episode returns to TV.