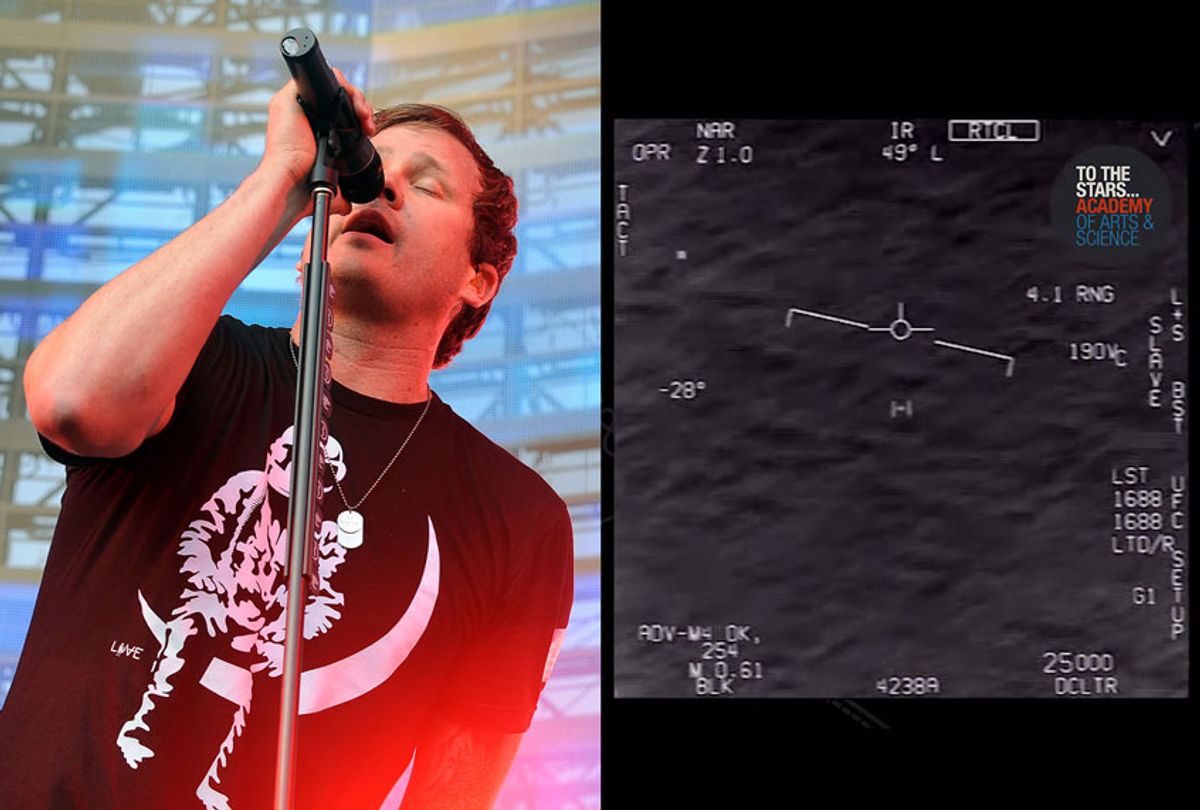 Tom DeLonge beside footage captured by a U.S. Navy F/A-18 Super Hornet using the Raytheon ATFLIR Pod that was being operated by a highly trained aerial observer and weapons system operator whom the government has spent millions of dollars to train. The footage reveals a Navy encounter that occurred off the East Coast of the United States in 2015 and the object in view remains unidentified (AP Photo/Katy Winn/U.S. Navy/To The Stars Academy)
--

Recently, former Blink-182 guitarist Tom DeLonge has gained a reputation as a believer — not in any religion, but in UFOs.  DeLonge — who co-founded the UFO research organization To the Stars Academy of Arts & Science in 2017, which released footage of possible UFOs that The New York Times reported on — has claimed to have “sources from the government” speak to him about aliens, and be in the know about classified information on the topic.

It turns out that DeLonge might really be onto something. In an interview with Motherboard, Joseph Gradisher, a spokesperson for the deputy chief of Naval Operations for Information Warfare, said “the Navy considers the phenomena contained/depicted in [the] 3 videos [that DeLonge made public] as unidentified.”

Gradisher told the website the Black Vault, which originally reported the news, that the Navy “has not publicly released characterizations or descriptions, nor released any hypothesis or conclusions, in regard to the objects contained in the referenced videos.”

But he recognized the videos and called them “unidentified.” In 2017 and 2018, three videos taken by Navy pilots depicting what many believed to be UFOs made national news. The first video, which The New York Times ran a story about, was from November 14, 2004. That video showed Navy pilots intercepting a strange object off the coast of San Diego, which was filmed from their F-18's gun camera. A second video, taken on January 21, 2015, showed the pilots commenting on the strangeness of the rotating objects. A third video purporting to show UFOs was released by To the Stars Academy and was filmed January 21, 2015.

John Greenwald, author of The Black Vault, told Motherboard  that he was surprised that the military called the fast-moving objects in the videos “unidentified.”

“I very much expected that when the U.S. military addressed the videos, they would coincide with language we see on official documents that have now been released, and they would label them as ‘drones’ or ‘balloons,’” Greenwald told Motherboard. “However, they did not. They went on the record stating the ‘phenomena’ depicted in those videos, is ‘unidentified.’ That really made me surprised, intrigued, excited and motivated to push harder for the truth.”

Gradisher told Motherboard each incident reported to the Navy regarding unidentified objects will be investigated, but that the results won’t be made public.

“The information obtained from each individual report of any suspected training range incursion will be investigated in its own right. The information obtained in these reports will be catalogued and analyzed for the purpose of identifying any hazard to our aviators,” Gradisher said. “Any report generated as a result of these investigations will, by necessity, include classified information on military operations. Therefore, no release of information to the general public is expected.”

Indeed, the Navy's confirmation makes you wonder what else DeLonge is right about. As he explained once to Paper magazine:

To give you an example, one time I remember bringing up a very specific craft that I believe we're building, in secret, to emulate the phenomenon that our government has been observing for decades. So I started talking about the craft, and its magnetic slide system and how it displaces over 89% of the mass of the ship, how it ionizes the engine, how it glows -- I went through the whole thing, and this engineer looks at me, this guy is 70 years old, and he goes, "You better be real f--king careful about what you're talking about." And I go, "Okay, so I'm close." And he goes, "I'm not f--king kidding with you. You better be really fucking careful." And he calls me up the next day and he goes, "I've had calls about you. If someone comes and asks you to get in their car, don't f--king get in the car." [laughs] And that's the s--t I'm dealing with.