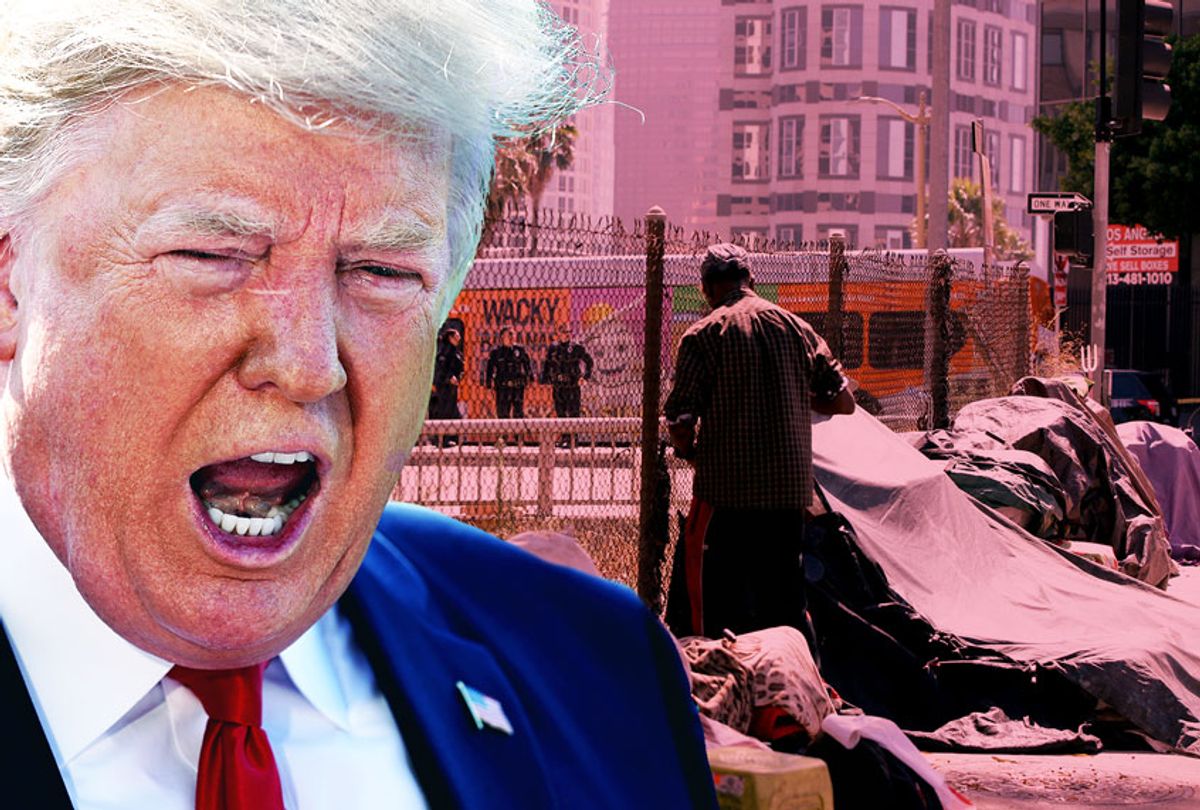 A newly displaced homeless camp is seen while Los Angeles Police officers guard a Harbor Freeway ramp during the visit of President Donald Trump in Los Angeles, Tuesday, Sept. 17, 2019. Trump began a California visit on Tuesday, saying he will do "something" about homelessness but offering no specifics beyond the mention of creating a task force. (AP Photo/Damian Dovarganes)
--

President Trump threatened to use the Environmental Protection Agency to punish San Francisco over its homelessness crisis — on the same day that his administration denied California Gov. Gavin Newsom’s request for housing vouchers to help fight homelessness.

"There's tremendous pollution being put into the ocean … there are needles, there are other things,” Trump told reporters aboard Air Force One Wednesday while returning from a two-day fundraising trip in California. "We're going to be giving San Francisco — they're in total violation — we’re going to be giving them the notice very soon. The EPA is going to be putting out a notice and you know they're in serious violation and this is environmental, very environmental.

"And they have to clean it up,” he added. “We can’t have our cities going to hell."

San Francisco Mayor London Breed called Trump’s comments “ridiculous assertions” and explained that the city’s sewer system “ensures that all debris that flow into storm drains are filtered out at the city’s wastewater treatment plants.”

“If the president wants to talk about homelessness, we are committed to working with our state and federal partners on actual solutions,” she said in a statement to the San Francisco Chronicle.

Trump’s newfound concern for the environment came just days after his administration stripped California of the power to set auto emissions standards in a bid to reduce air pollution and overturned clean water regulations nationwide.

Trump’s threat to sic the EPA on San Francisco came on the same day that Housing and Urban Development Secretary Ben Carson denied a request from Newsom for help fighting homelessness.

Newsom and the mayors of California’s 13 largest cities asked the Trump administration to expand programs like housing vouchers to help get people off the street.

“In California, state and local governments have ramped up action to lift families out of poverty by investing in behavioral health, affordable housing, and other homeless programs,” the lawmakers wrote. “In contrast, your Administration has proposed significant cuts to public housing and programs like the Community Development Block Grant.”

Carson rejected the request in a letter, which he said he wrote at Trump’s request.

"Your letter seeks federal dollars for California from hardworking American taxpayers but fails to admit that your State and local policies have played a major role in the current crisis," Carson wrote, blaming lawmakers for creating an “over-regulated housing market” and “policies that have weakened law enforcement.”

Carson also accused California lawmakers of undercutting the ability of police to tear down homeless camps and creating sanctuary policies, arguing that undocumented immigrants have caused housing prices to spike while “draining resources.”

Courts have limited California’s ability to remove homeless people from the streets. On Tuesday, the Los Angeles County Board of Supervisors voted to support a motion to challenge a federal court decision barring police from arresting people for sleeping on sidewalks when there are not enough shelter beds, NBC News reported.

Trump has increasingly focused on homelessness in California ever since he assured Fox News host Tucker Carlson in July that he may “do something to get that whole thing cleaned up.”

During his California fundraising trip, Trump assured foreign real estate investors that he would protect them from California’s homeless population.

"We have people living in our ... best highways, our best streets, our best entrances to buildings ... where people in those buildings pay tremendous taxes, where they went to those locations because of the prestige," he complained, according to CNN.

Trump’s California trip came after his Council of Economic Advisers released a report alleging that the homelessness problem was caused by overregulation of housing. The administration report offered a deregulation fix, calling for changing zoning restrictions and slashing environmental regulations that restrict where homes can be built.

Democratic state Assemblyman Miguel Santiago, who represents the Skid Row section of downtown Los Angeles, and has already authored a bill to limit environmental laws that block the building of housing and shelters, told The Los Angeles Times that it was difficult to take Trump seriously when the administration has called for cutting housing funding and proposed a ban on housing aid to any household where even one resident is living in the country illegally.

“I think it’s politics at its worst where he is going to pick on a vulnerable community — no different than when he picked on immigrants,” he told the Times. “I think it’s a little cynical for someone who has done everything in their right mind to make it worse on the working poor.”

Tom Phillipson, the acting head of Trump’s Council of Economic Advisers, told reporters on Monday that "policing may be an important tool to help them get off the street” as well.

“The White House report on homelessness treats this crisis like fodder for a cable news debate,” Garcetti told The Los Angeles Times. “We don’t have time for that. If the president really cares about solving this crisis, he wouldn’t be talking about criminalization over housing. He’d be making dramatic increases in funding for this country’s housing safety net.”