While Trump grabs headlines, his Cabinet members quietly use transphobia to shore up white evangelical support 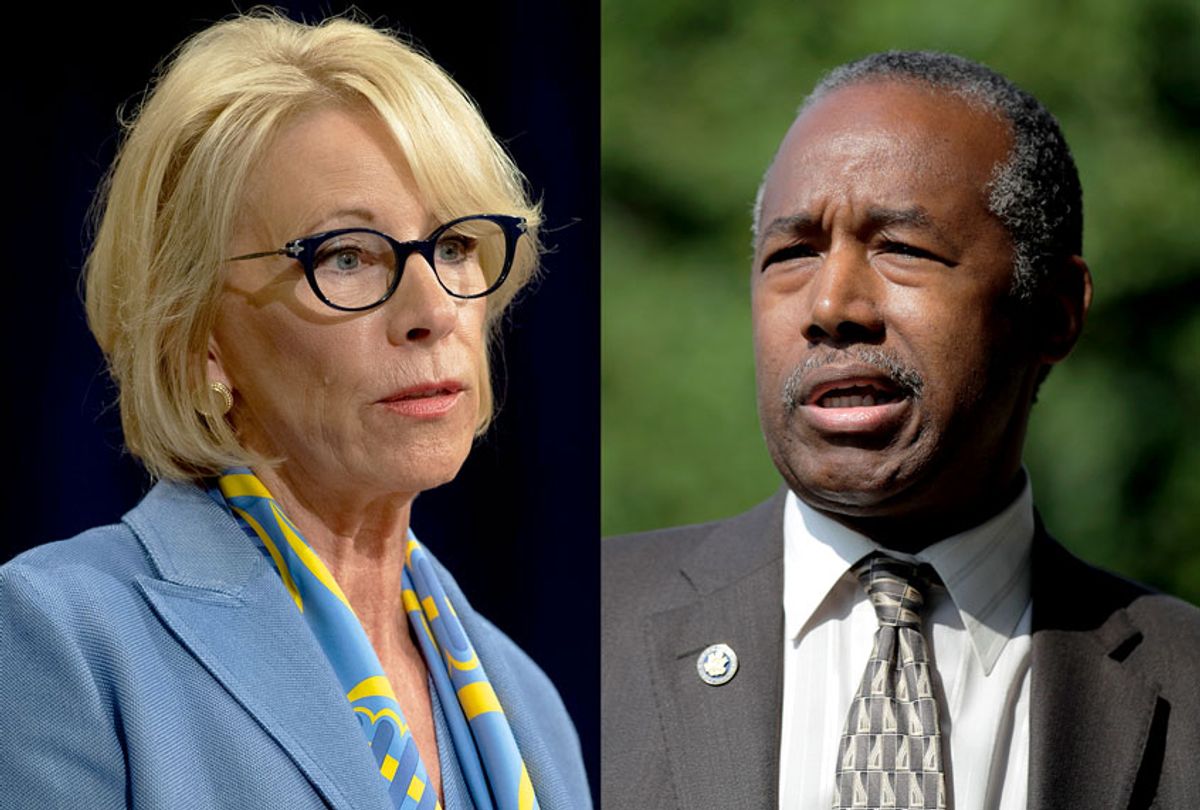 The white evangelical vote is almost certainly a lock for Donald Trump in 2020, but it appears the president is taking no chances of losing this critical voting block. One major part of that strategy appears to be quietly deploying his Cabinet members, especially those associated with the Christian right, to generate stories highlighting the Trump administration's overt bigotry toward trans people, and its eagerness to deprive trans Americans of basic rights.

Just this week, both Education Secretary Betsy DeVos and Housing and Urban Development Secretary Ben Carson snagged coverage by making community visits that were ostensibly for noble purposes, but were clearly meant to signal to Christian right voters their hostility to trans rights.

Carson, in particular, made sure that there was no mistake about his purpose in visiting HUD's offices in San Francisco this week, a city whose name is frequently used in right-wing circles as shorthand for the alleged excesses of the LGBT rights movement.

Multiple people who attended an internal meeting at the HUD offices in San Francisco told reporters that, in his remarks to staff, Carson claimed that "big, hairy men" are trying to infiltrate women's homeless shelters.

This was understood by those at the meeting to be a reference to the urban legend that cis men pretend to be trans women in order to gain access to women's spaces, a myth that has been repeatedly debunked by researchers. In fact, the opposite is true — a recent study shows that denying trans people the right to use spaces that align with their gender identity increases their risk of being sexually or otherwise assaulted.

While Carson's spokesperson claimed that the secretary "does not use derogatory language to refer to transgendered individuals." another HUD employee confirmed to the Washington Post that "Carson was referring to men who pretend to be women to gain access to battered women’s shelters," the pretense that is always used to deny trans women the safety of being in women's spaces, such as shelters or bathrooms.

This isn't just Carson shooting his mouth off, either. Under Carson's leadership, HUD has moved towards finalizing a rule that would allow federally funded shelters to turn away trans people seeking safety, no doubt also relying on false claims that trans people are faking their gender identity for nefarious purposes.

This is particularly alarming, as trans people experience eye-popping rates of homelessness. According to the National Center for Transgender Equality, one in five trans people have been homeless at some point. It's troubling, but not surprising: Trans people often experience housing and family discrimination that leaves them without homes. By spreading these ugly myths, Carson is only contributing to the problem.

Carson's meeting was officially behind closed doors, but there can be little doubt that he intended his nasty comments to get a public airing, since he chose an office full of career HUD employees in San Francisco as his audience. Some people apparently walked out during his talk, and Carson and his staff were almost certainly expecting people in the room to leak to the press.

DeVos played a similar game this week, during what was supposed to be an innocent "back to school" tour. During the tour, DeVos made a point of visiting Harrisburg Catholic Elementary School in Pennsylvania on Thursday. The school  has a policy barring trans people from working there or attending school, claiming that gender-affirming medical care is "self-mutilation and therefore immoral."

The ostensible purpose of the visit was to promote a program that redirects taxpayer money from public schools to private schools by granting tax credits to people who give scholarships to families so their kids can attend private schools. Pennsylvania Gov. Tom Wolf, a Democrat, vetoed this effort in June, arguing that the money should go instead to fixing public schools.

While neither the DeVos team nor staff at the Harrisburg school would answer questions about the anti-trans policy, the point of this visit couldn't be clearer. DeVos was sending a message to Christian conservative voters that she is trying to secure more government funding so they can take their kids out of public schools, which may have policies barring discrimination based on gender identity, and instead send their kids into schools that are overtly anti-trans.

These kinds of stunts represent a clever strategy, it must be said, as the right seeks to navigate the tricky political terrain around trans rights.

On one hand, hating trans people is really important to the white evangelical base that Trump desperately needs to win in 2020. Christian right leaders, after losing the fight to stop same-sex marriage, have refocused their energies on picking on trans people, an even smaller and more vulnerable minority. Apparently, Christian love is useless as an organizing and fundraising tool, so leaders of the religious right are always looking for the next target for their followers to  hate.

On the other hand, overt transphobia of the sort the religious right is peddling is not popular with the public at large. Research shows that 62% of Americans say they feel more supportive of trans rights than they used to be. Strong majorities believe trans people should be able to serve openly in the military and only a minority want to force trans people to use bathrooms that don't correspond to their gender identity.

DeVos and Carson's gambits help them message transphobia to the Christian right, while largely staying off the front pages and the cable networks, which inevitably focus more on big-ticket stories like Trump's latest corruption scandal or efforts to pull the country into another war in the Middle East. But while most of the country looks elsewhere, Christian right media can highlight these stories aggressively, encouraging their audience to set aside any doubts they might have about Donald Trump: At least he's sticking it to the people they've marked as their latest scapegoat. Whether or not that's enough to win the election, it's likely to ensure that white evangelicals will turn out in strong numbers for their guy one more time.