Corey Lewandowski, Stephen Miller and the wages of contempt in TrumpWorld

As odious as Trump's minions like Lewandowski and Miller are, there's an upside: They'd be nothing without him 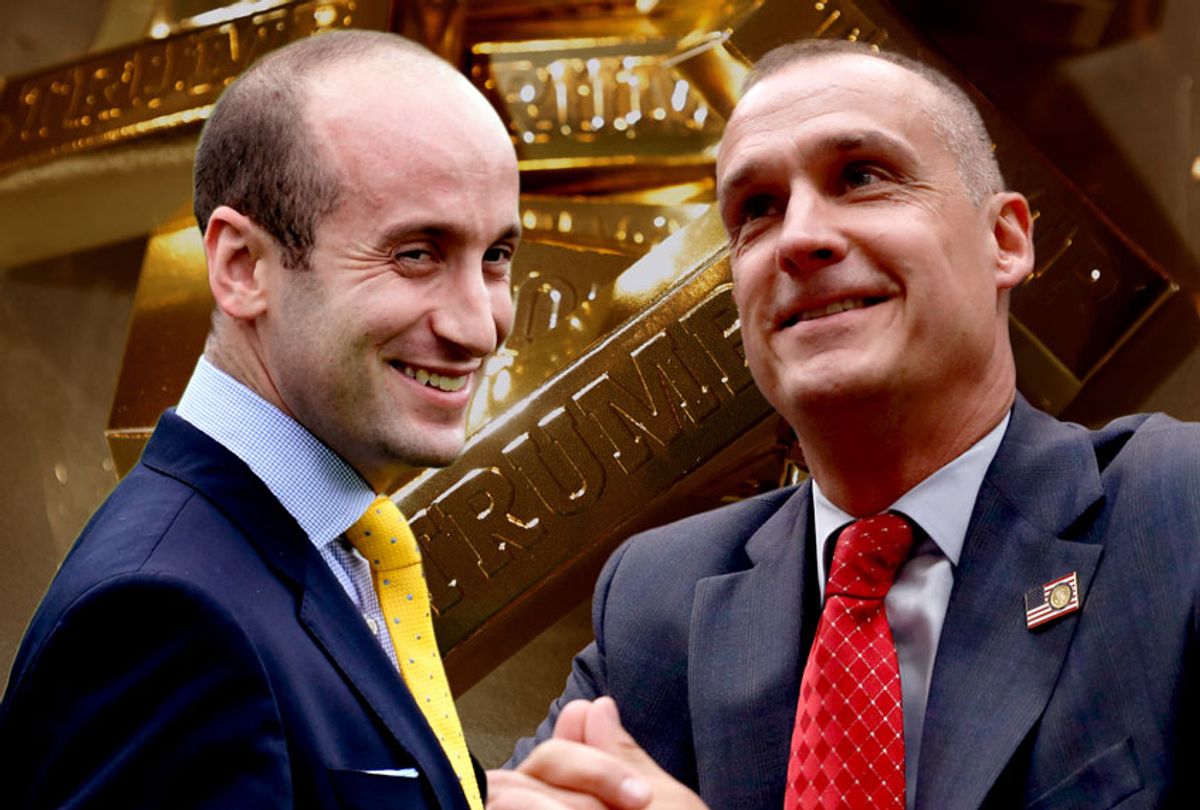 One of the worst side effects of the Trump presidency is the unleashing upon the world of these squinty-eyed, shaved-head, pissy little monsters like Corey Lewandowski and Stephen Miller, providing them a platform where they can spread their hatred of and contempt for decency and democracy and all things right and just well beyond their lonely basements and bedrooms where they had heretofore been confined. Guys like them have always been with us. You can probably recall running across one or two of them in a civics class in high school or college, shooting their sweaty palms into the air from the back row, trying to be recognized so they could challenge one liberal shibboleth or another.

They were never included in the gang that passed a football or tossed a frisbee around the quad after classes. Nobody invited them to go out for a beer after the game, or to drop by the common room to hang out and order pizza. People didn’t pay enough attention to them to learn their names, until a toxic stew of right-wing politics and Donald Trump loosed them upon us, and then suddenly they were all over our public life — or, perhaps worse still, were not on your television screens, which meant that they were somewhere in the bowels of the White House (Miller) or loping along K Street in pinstripes as a lobbyist (Lewandowski), executing the evil plans of the Koch brothers or white supremacist “thinkers” like Richard Spencer.

What is it about Trumpazoid creeps like Lewandowski and Miller, anyway? Have you ever seen a photograph of either one of them smiling? I mean, they have both managed to gather to themselves more power than either could have dreamt of as a young man, but they are two of the angriest, unhappiest people I’ve ever laid my eyes on. Every time Miller comes out of whatever hole they’ve got him stashed in at the White House, he looks like he’s ready to tear the heads off small children and drink their blood. Lewandowski is filled with so much pent-up rage, he looks like his chest is about to explode.

Did you see Lewandowski when he testified before the House Judiciary Committee this week? There he was, with his big chance to shovel shit on the heads of all the libs and show them, once and for all. What a platform. The Democrats had just passed new rules regarding an impeachment inquiry of Lewandowski’s hero Donald Trump, and he had the stage all to himself at their first hearing. He came to Capitol Hill armed with snark and contempt and hatred for liberals and Democrats and lefty losers. The White House had even supplied him with a spurious assertion of some kind of “executive privilege” that nobody had ever heard of, a kind of “get out of jail free” card he could fling at his Democratic tormentors at will.

It was a perfect moment for an angry, contemptuous creep. Trump didn’t play by Washington’s rules, and neither would Lewandowski. He was under oath, but he didn’t have to tell the truth because he had Trump’s “privilege” to throw at any question he didn’t like. He threw it at them with a scornful snark that said he knew it was bullshit, but he didn’t care.

This is what Trumpian mini-me’s like Lewandowski don’t understand. That’s why he got caught in his own web of lies at the end of the hearing, when he was being questioned by Democratic counsel Barry Berke, who was trying without much success to get Lewandowski to admit that Trump had asked him to intercede with then-Attorney General Jeff Sessions and get him to shut down the Russia investigation. Lewandowski kept stiff-arming, saying he couldn’t talk about any of his conversations with Trump.

They went back and forth for a moment, with Lewandowski not admitting that he had lied on MSNBC until finally he asserted that he had “no obligation to have a candid conversation with the media whatsoever.” Berke pressed him to essentially admit that what he told Ari Melber was a lie, which in turn was an admission that what he told Robert Mueller was the truth.

Lewandowski was admitting to the hollow core at the center of Trump and the right’s whole “fake news” campaign. As both a provider and an attacker of “fake news,” Lewandowski closed the circle. He was paying the wages of contempt for the media, for the Congress, for the democratic process, for truth itself right there out in the open on live TV. The problem with living in the fog of right-wing contempt is that no one ends up with an inclination, much less an obligation, to believe you.

Trump is facing the same boy-who-cried-wolf problem right now as he tries to cobble together a response to Iran’s apparent attack on Saudi oil fields. When he’s finally put in the position of having to tell the truth and make it count, nobody believes him.