Wall Street is ignoring the omens of recession — here’s why

An economist unravels the seeming contradiction between stocks near record highs and growing fears of a recession. 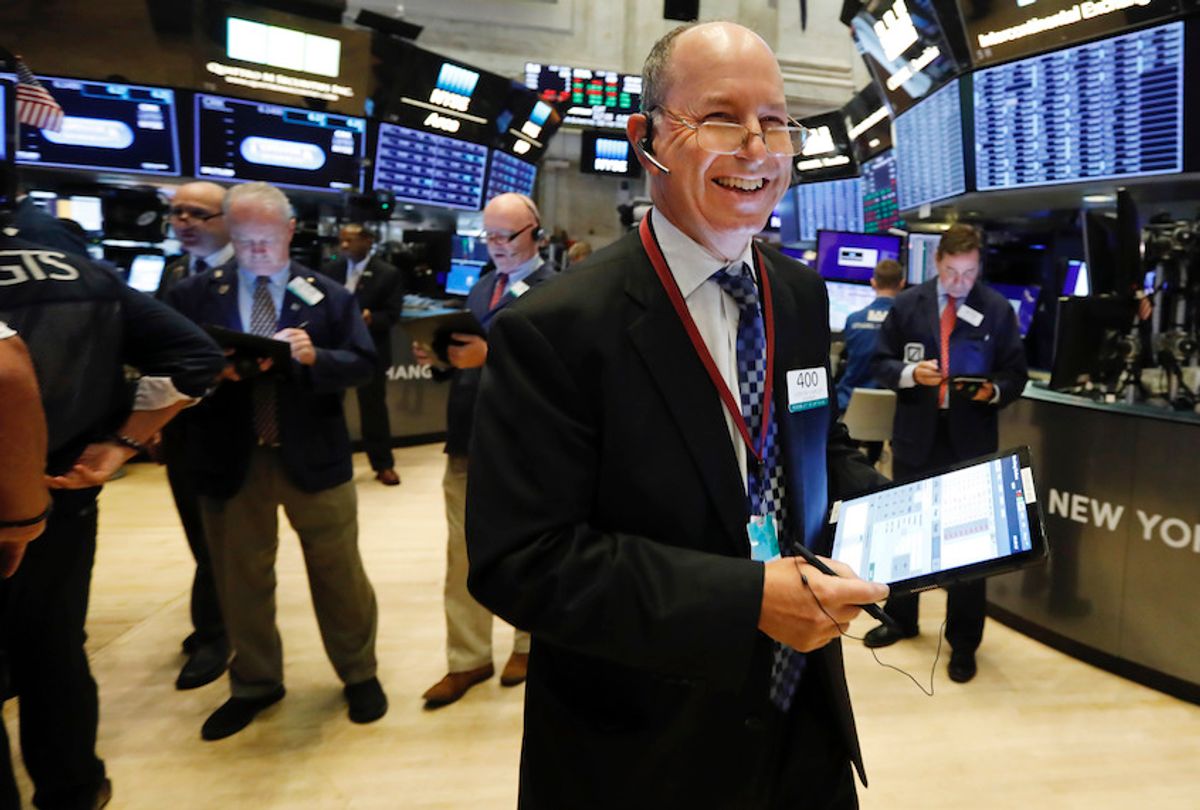 The world is on the brink of a recession, if all the breathless headlines are to be believed. So why are U.S. stocks near all-time highs?

That’s a question my MBA students have been asking me lately. Even the Federal Reserve is concerned — at least worried enough to reduce U.S. borrowing costs for the second time this year.

Stocks are usually considered a barometer of a company’s future prospects, so rationally you’d think market prices would be a lot lower if a recession were close at hand. After all, recessions are a drop in economic activity, which means consumers and businesses are buying less stuff.

The answer to my students’ question has a lot to do with profits and interest rates, but also “animal spirits.”

Both the Dow Jones Industrial Average and the Standard & Poor’s 500, Wall Street’s two main gauges for the U.S. economy, hit record highs in July and have been hovering near them ever since.

At the same time, signs of trouble for the global economy — and the U.S. — have been growing. By Deutsche Bank’s reckoning, U.S. stocks should be 13% lower than they are today.

But understanding exactly why stock markets move up or down is exceptionally difficult.

One of the greatest economists of all time, John Maynard Keynes, believed there were “animal spirits” — essentially, emotions, instincts and other unquantifiable human behavior — that drove people to waves of optimism or pessimism, as he explained in his 1936 book “The General Theory of Employment, Interest and Money.”

Keynes believed these “spirits” had a huge influence on financial market prices and conditions. But beyond these mysterious movements there are two primary factors that push overall stock prices up and down: profits and interest rates.

The value of a public company and its shares is based on its profits.

Profits are just the difference between a business’s sales and its costs. Buying shares in a company gives the buyer a claim on a portion of these profits. During an economic expansion, profits go up. During a recession, profits for most companies go down.

Stock prices are directly related to profits because when profits rise companies have more money to give out to shareholders in dividends. This makes stocks more valuable.

Rising profits also mean companies have more money to buy back their own shares, which leaves fewer available on the open market. This reduction pushes stock prices up because each one now gets a slightly larger share of profits.

The impact of a share buyback is no different from what happens when any kind of product becomes hard to find. Sellers see lots of demand while they have relatively little product to supply. To balance this excess demand, they raise prices.

During recessions, companies’ profits fall. Less profit means lower dividends and less money for share buybacks. Both of these reduce share prices since there is less incentive to invest.

The impact of interest rates

The connection between profits and stock market prices is fairly easy to understand. Interest rates, on the other hand, are a bit less straightforward but are just as potent at driving stock prices.

Interest rates have this effect because many companies borrow money to operate their business. When interest rates fall, it costs less to run the company since businesses pay less to service their debts, boosting profits. On the other hand, when rates rise, costs go up, squeezing corporate earnings.

Lower interest rates also boost the share prices of companies that don’t borrow money because they increase the present value of their future profits. This is why money earned tomorrow is worth less than money earned today.

The simplest way to see this is to imagine winning a million dollars right now. You’d be a lot less thrilled, however, if you were told you wouldn’t receive a dime for 25 years. And so lotteries typically let winners take a greatly reduced lump sum immediately or receive the total in smaller payouts over many years.

It’s the level of interest rates that determine just how much future income is worth today. Higher rates reduce the value of future prizes and profits; lower rates increase it.

To understand why stocks keep going up, we have to consider what profits and interest rates are doing, and what Wall Street traders are focused on.

Corporate profits, which have been hitting their own record highs in recent years, are currently stagnating and are forecast to dip as a result of the trade war.

However, central bankers around the world are also worried about a recession. They are working hard to prevent this recession by driving down interest rates now. For example, the European Central Bank on Sept. 12 cut a key interest rate and took other steps to ease borrowing costs for companies and businesses. And the Fed is expected to follow suit on Sept. 18.

Lower interest rates encourage consumers, businesses and governments to borrow and spend more money — and boost the value of stocks. Although some investors are concerned about a recession, apparently most believe actions by the Fed and other central banks will be enough to keep the global economy humming — or at least enough to keep corporate profits high.

How long will the rising stock market continue? Who knows. But that’s what makes following financial markets so interesting for academics and so frustrating for individual investors.