Chronically underpaid EMTs are being assaulted at record rates

All the money goes to the top, as front-line emergency medical workers stress over the basics 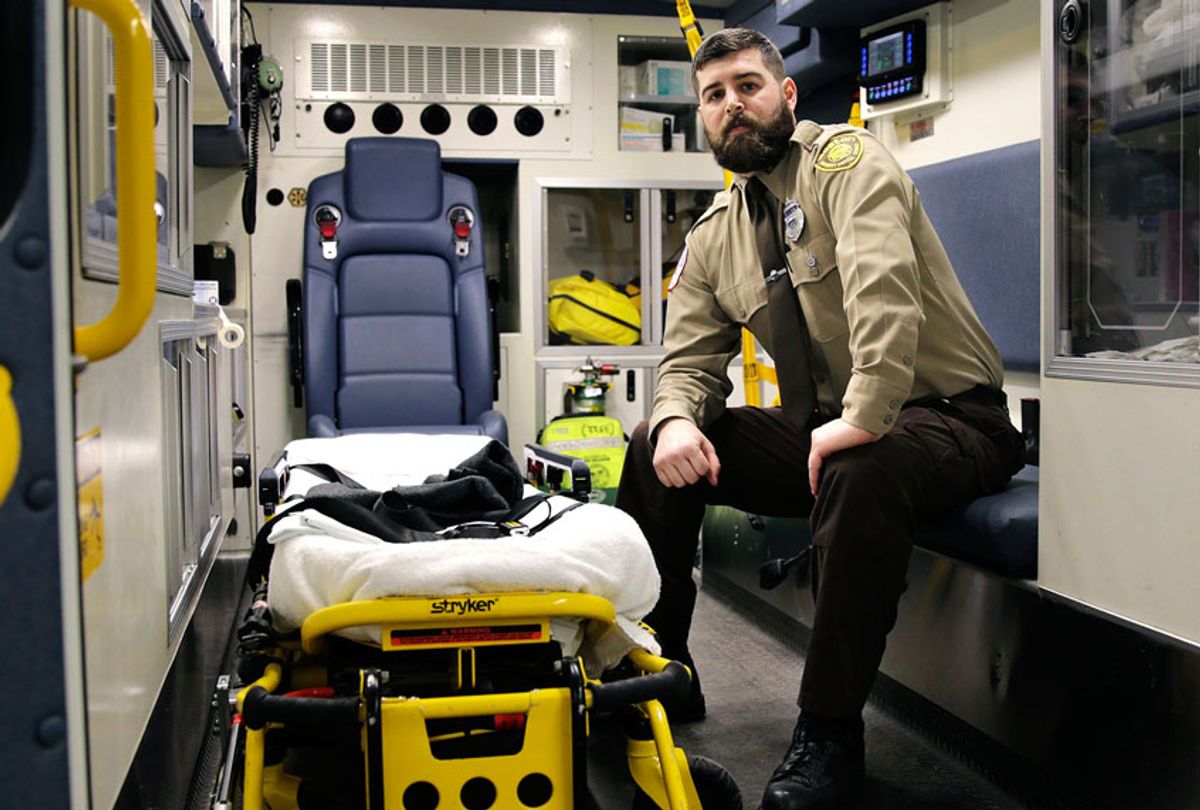 Boston Emergency Medical Services EMT Paul Mitchell sits in an ambulance at his station in the Hyde Park neighborhood of Boston. Mitchell, with bystander Carlos Arredondo and volunteer Devin Wang, are credited with helping to save the life of Jeff Bauman, who suffered traumatic injuries in the Boston Marathon bombings. (AP Photo/Charles Krupa)
--

If Upton Sinclair were to write the modern equivalent to “The Jungle,” he might make the setting the metaphorical meat grinder of today’s emergency medical services industry.

Across the nation, emergency medical service professionals, the front-line workforce upon which so much of a patient outcome rests, are grossly underpaid for brutal work schedules that put them at risk of both serious physical injury and burnout.

The cherry on the top of this abuse sundae is that they are 14 times more likely to be violently assaulted on the job than a firefighter.

In 2017, FDNY Paramedic Yadira Arroyo was murdered on the job, allegedly by a homeless man with serious mental health issues. In summer 2019, a Boston emergency medical technician (EMT) survived after being stabbed multiple times, These workers are in harm’s way, yet make nowhere near their fellow first responders, namely, cops and firefighters.

And like cops, EMTs are forced to deal with the people that much of society avoids: the homeless, the mentally ill, and folks in the throes of alcohol and drug addiction. Across the country, the everyday violence directed towards EMTs has led to some being issued body armor. Yet beyond this defensive protection, this workforce of healers has nothing to protect themselves from harm aside from street smarts.

The irony is that when emergency medical professionals respond to care for a patient, the clock starts running on what is dubbed the “golden hour” — as much of a patient’s long-term prognosis is dictated by what happens in those critical first sixty minutes and by the skill of the EMTs on the scene.

Though EMT’s role is critical to public health, their pay is not commensurate. In an industry where the average CEO’s salary is $16.1 million a year, up from $14.7 million just last year, these workers can make as little as $22,760 a year, or $11.38 an hour, according to the Department of Labor’s Bureau of Labor Statistics.

According to a survey by the Associated Press and Equilar, an executive search firm, the health care sector has thrown more money at its CEOs than any other sector, including energy and finance.

Meanwhile, down here on Earth, the median EMT and paramedics wage is $34,320. EMTs who work for a hospital make out best, at $36,650; but private ambulance services lag behind, with a median salary of $31,590 for their workers, according to the DOL’s Bureau of Labor Statistics. The gender pay gap is astonishing, too: in one national survey, male EMTs doing the same job as women were averaging $10,000 more a year.

The low pay, the long hours, even compulsory overtime, along with the stress that comes with having to be ready for anything, takes a serious toll that puts both the EMS workforce and their patients at risk.

The sector is plagued with high turnover and chronic short-staffing — which leads to more mandatory overtime, workplace injury and burnout, or worse.

“Do this math, and you’ll find some crews may not stop during their entire 24-hour shift,” reported trade publication EMS World in their March 2019 issue. “Half of EMS personnel sleep only six hours every 24, with more than half reporting poor sleep quality and 70 percent reporting some problems with sleep. Loss of sleep, stressful situations, and not eating on a regular schedule could push an already-stressed employee close to the edge.”

“Insufficient sleep has been linked to cardiovascular disease, obesity, metabolic disorders, gastrointestinal conditions, hunger/appetite, and changes in emotion. Research has found higher levels of negative behavior correlating to sleep deprivation and that a person going without sleep for 24 hours experiences impairment equivalent to a blood alcohol level of 0.10%.”

As it turns out, the front lines of America’s health care system are staffed by lots of people struggling to make ends meet in an occupation where one mistake means somebody might die.

“In 2014 the Bureau of Labor Statistics reported the overall injury rate for EMTs and paramedics was 333 injuries per 10,000 workers—more than three times higher than the average rate of 107 for all occupational groups in the U.S.,” according to EMS World.

But getting hurt on the job is the least of it.

According to a National Institute of Health research paper published in May, national survey data indicates “that among Emergency Medical Technicians (EMTs), including firefighters and Paramedics, rates of suicide are significantly higher than among the general public. EMTs face high levels of acute and chronic stress as well as high rates of depression and substance abuse, which increase their risk of suicide.”

This cycle of pain, misery and loss is what you get when the organizing principle of your health care system is not human wellness, but unfettered greed.