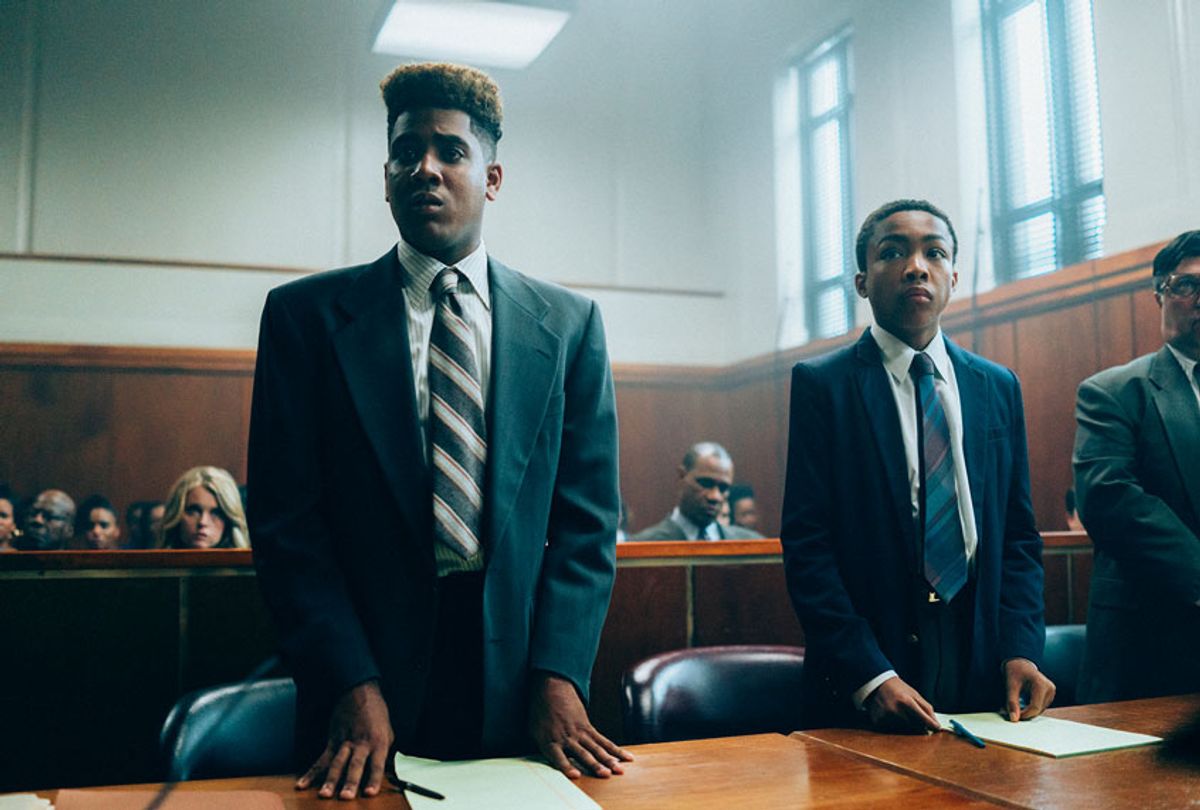 Jharrel Jerome and Asante Blackk in the Netflix limited series, "When They See Us." (Atsushi Nishijima/Netflix)
--

"I feel like I should just be in the Bronx right now, chillin,' waiting for my mom's cooking, but I'm here," Jerome said in his emotional acceptance speech.

Jerome starred as Korey Wise in the four-part limited series that tells the story of The Central Park Five (now the Exonerated Five), a group of young boys — four African American, and one Hispanic — who were arrested, tried and convicted for the rape of Trisha Meili in 1989.

While going out for a night jog in Central Park, Meili, a 28-year-old white investment banker, was attacked, beaten, raped and left for dead. Around the same time, a group of 30 or more black and brown teenagers were hanging out in the park, acting rowdy, talking trash, and doing what teens do.

Police officers constructed a list of people who were allegedly in the park that night and rounded them all up. After questioning groups of teens and conducting what they called an investigation, the law fingered Raymond Santana, Kevin Richardson, Antron McCray, Yusef Salaam and Korey Wise as the perpetrators. What’s different about Wise’s story is that he wasn't on the original list. Wise only went down to the police station in support of his friend Yusef Salaam; he didn’t want Salaam to be alone in a scary precinct. When the NYPD had too many holes in the story they constructed about the rape, they used Wise to fill in the blanks.

The FBI conducted a DNA test before the trial and found zero matches between Meili and the five children, but still decided to prosecute, with New York District Attorney Robert Morgenthau calling the evidence “inconclusive.” The state won. All five boys were sent to prison, where most of them sat until convicted murderer and serial rapist Matias Reyes confessed to the crime in 2002. Korey Wise was still a child, but he was the oldest. He was sentenced as an adult and received the most time.

In "When They See Us," Jerome brilliantly walks us through the life of Korey Wise as it unfolds: the fear that the system instills in young black men; the experience of innocence being snatched away in an instant; the inability to figure out jail culture and the beatings, hunger and pain that comes with it. How being in solitary confinement is both the safest place and the least safe, because you trade a sense of time and place for never-ending uncertainty. Jerome's performance placed us inside Korey Wise's life, portraying an experience all too often left out of the prestige TV landscape.

But viewers need to see what the system does to poor black and brown people. The emotional weight of the story of these five individual boys, and the lives they inhabit as men, can help people at home understand the significance of this particular case more than statistics and headlines can.

A handful of black men were charged with sexual assault and convicted. What at first might be experienced as detached acceptance — sexual predators should be in prison, we can say — first turns to rage when the long-overdue exoneration shows how the system worked against these boys. But then there's relief and joy, right, because the men have been released? Now life can go on. The dramatic resolution of their story — the clearing of their names after the true perpetrator's confession — actually invites bystanders not to look too deeply at the bigger picture. They are home; all is well. The system fixed itself this time, though we surmise that is a rare occurrence.

But DuVernay's series adds a gut-wrenching layer of emotional truth to the story that is sorely needed if we want to see meaningful systemic change. We are forced to relive a version of the trauma these five victims of the system endured. We see lying prosecutors who operate within a broken system that leads to broken families. We see those families trying cope while their kids are incarcerated. And we see the kids first painfully try to adjust to prison life, and then adjust back in the real world as partial citizens; they have curfews and limited freedoms solely based on a lazy, racist, incompetent department’s need to solve quickly an attention-getting criminal case.

"When They See Us" is a revolutionary piece of art with the power to change the way we understand the American justice system, and most importantly, ourselves. DuVernay's courageous achievement in film, which now includes Jerome's Emmy win, represents an undeniable victory for visibility, not only of these specific boys and men, but also the wider injustice that enveloped them. And now America can't look away.