Don't look away from Ava DuVernay's "When They See Us," the most important series on TV now 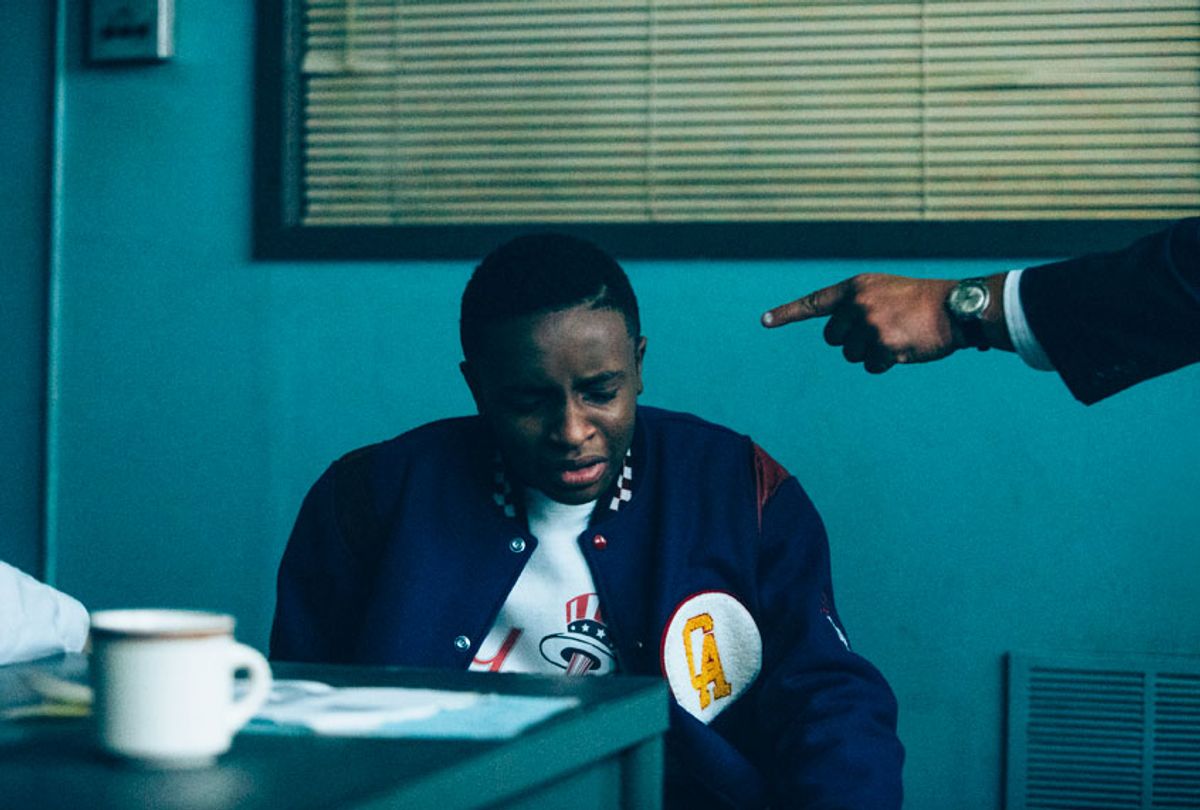 Caleel Harris in "When They See Us" (Atsushi Nishijima/Netflix)
--

Ava DuVernay's new Netflix four-part drama "When They See Us" is the most important series on television now.

“When They See Us” tells the story of The Central Park Five, a group of young boys — four African American boys and one Hispanic boy — who were arrested, tried and convicted for the rape of Trisha Meili back in 1989.

I couldn't image the trauma and pain that comes with being falsely accused of rape and having the system that's supposed to protect you know that you are innocent and still try to send you off to jail, fully aware that the real rapist is still roaming the streets. I couldn't imagine, but Ava DuVernay has given me an idea.

While going out for a night jog in Central Park, Meili, a 28-year-old investment banker who happened to be a white woman, was attacked, beaten, raped and left for dead. Around the same time, a group of 30 or more black and brown teenagers were hanging out in the park, acting rowdy, talking trash and doing what teens do. Meili being white and the suspects being black and brown sparked racial tension in New York City — so much that Donald Trump ran ads in four major New York publications calling for the death penalty for the five boys, so much that the outcome this case was decided before it even made it into the court room.

Police officers constructed a list of people who were in the park that night and locked them all up. After questioning groups of teens and conducting what they called an investigation, the law fingered Raymond Santana, Kevin Richardson, Antron McCray, Yusef Salaam and Korey Wise as the perpetrators. The FBI conducted a DNA test before trial and found zero matches between Meili and the five kids, but still decided to prosecute, as the New York District Attorney Robert Morgenthau called the evidence “inconclusive.” The state won and all five of the boys were sent to prison, where most of them sat until convicted murderer and serial rapist Matias Reyes confessed to the crime in 2002.

“I know it’s hard for people to understand, after 12 years, why a person would actually come forward to take responsibility for a crime,” Reyes said to investigators in a 2002 interview. "At first, I was afraid, but at the end of the day I felt it was definitely the right thing to do.”

Reyes met Kory Wise on Rikers Island, while Wise was still serving time for the rape. The two got into a fight over the television initially, but later had a friendly exchange, and Reyes felt guilty and decided to come forward. Reyes knew all of the details that only the guilty would know — and his DNA matched evidence gathered in Meili’s rape kit.

"Nobody wanted to believe it," said Morgenthau — who never apologized to those boys who grew to be men in prison — in response to Reyes' confession. “It was a question of tying it down, making sure we weren't making another mistake."

The problem is that it was never a mistake. DuVernay's brilliant "When They See Us" makes that clear. Mistakes happen when evidence gets mixed up, when suspects lie to protect themselves or other people, when witnesses are shaken, high on drugs or self-serving. None of these things happened in this case.

The police officers locked up these children, forced confessions out of them — some without parents or guardians present — while prosecutors watched and ignored DNA evidence. That’s not a mistake, that’s racism at work. The media did its racist part, painting these young black boys as criminals. So did prominent public figures who led the campaign against them; Trump and Morgenthau didn’t even think enough of the men to apologize after they were exonerated.

"When They See Us" gives viewers a glimpse into how messed up our justice system really is. Black people are invisible in the criminal justice system. The system doesn’t see us; it can’t. We know African Americans are incarcerated at the highest rate in the US, making up over 30% of today’s prison population even though we only make up 13% of country’s population. But we still remain invisible.

Between 1980 and 2015, the number of people incarcerated in America increased from roughly 500,000 to over 2.2 million, according to the NAACP. Furthermore:

Despite having access to all of the statistics, studies and hard evidence of how racist the system is, black and brown people still aren't seen as people, if we are even noticed or seen at all. I'm proud of all of the work that prison reform activists are doing, and hoping awareness of "When They See Us" spreads as DuVernay's drama adds another vital human layer to our fight for justice.