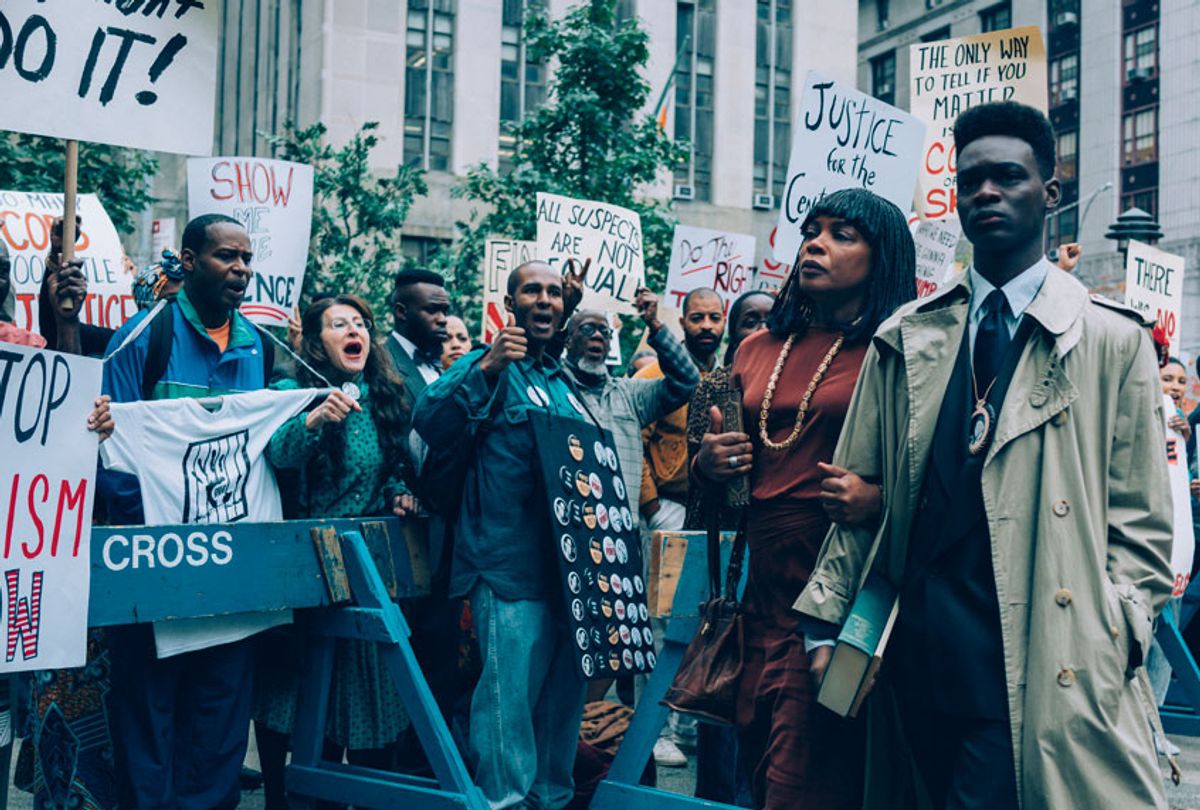 A montage of outdoor scenes leads the second episode of “When They See Us,” depicting New York City residents from all walks of life absorbing coverage of the evolving Central Park jogger case. The year is 1989, and the media rush to pass sentence on the teenagers accused of a terrible crime is in full swing.

Over images of New Yorkers shopping, traipsing through the grass and engaging in other banal endeavors, we hear a newspaper columnist reading florid, menacing prose describing his fantasy of how the boys arrested for the brutal rape and assault of Trisha Meili, a young white investment banker, were raised, how they live.

“They were coming downtown from a world of crack, welfare, guns, knives, indifference and ignorance. They were coming from a land with no fathers. . .  They were coming from the anarchic province of the poor,” he reads. “And driven by a collective fury, brimming with the rippling energies of youth, their minds teeming with the violent images of the streets and the movies, they had only one goal: to smash, hurt, rob, stomp, rape. The enemies were rich.” He searches for another term, and his colleague offers the obvious: they were white.

Looking back at history reveals crimes within crimes, truths we were blind to when we were inside of those moments. Such revelations can feel deeply shameful or outright enraging. They might also blossom into an awakening.

“When They See Us,” Ava DuVernay’s four-part limited series premiering Friday on Netflix, is such an examination. More than this, it could be the most important serialized TV event of the year. DuVernay never reveals the name of the columnist who writes the words that would play a significant role in shaping how the world would come to view Kevin Richardson, Yusef Salaam, Raymond Santana, Antron McCray and Korey Wise. You can easily look up the writer’s byline.

In contrast, most folks know very little of the real story of what happened to these five boys, beyond what is public record. Their convictions were vacated in 2002, and in 2014, they received a settlement for $41 million. In monetary terms, the one upon which most people place value, that sum might seem as if justice has been served. But it doesn’t come close to adequate repayment for the years these men lost, or the blows their families sustained, or the damage done in being reduced to a single pejorative moniker, the Central Park Five.

The notion of being seen is a something many people take for granted, and some members of marginalized communities are often denied. It informs “When They See Us” from start to finish, title to final credits.

And we see who Antron McCray (Caleel Harris) is before a columnist transforms his life into a bleak consumption. We first meet Antron as he jokes around with his very present father (Michael K. Williams) as they share a meal. Kevin (Asante Blackk) is an aspiring trumpeter with a doting, hard-working older sister, and both continue striving while their mother contends with an illness.

Yusef (Ethan Herisse) and Korey (Jharrel Jerome) are close friends, though of the two Yusef is the more studious. Raymond (Marquis Rodriguez), like the others, is playful and lured by the invitation of running free with a bunch of other boys on a nice spring night.

Only a couple of them knew one another prior to April 19, which we find out when they’re pulled out of their interrogation rooms and placed together in a holding cell for the first time. At this point they’ve been beaten and threatened into saying whatever the detectives tell them, and as they exchange their stories they confess what they know to be true: they were forced to “lie on” each other.

In addition to executive producing the series along with Robert DeNiro and Oprah Winfrey, among others, DuVernay also co-writes every episode, ensuring that each moment carefully lives up to the series title. And she does this simply by showing her subjects in the midst of their youthful lives before the justice system interrupted them.

By choosing to keep a consistent and unyielding focus on Antron, Kevin, Yusef, Korey and Raymond,  DuVernay strives to make the audience feel how extensive an injustice was committed simply because these young men are the wrong color, and happen to be in the wrong place at the wrong time.

She makes that point in ways obvious and subtle: In that second episode montage, an elderly man is walking beneath an underpass at night and has his path briefly cut off by a gang of giggling teenagers. To his alarm one of the boys puts his hands on him before backing off, laughing, as others saunter across his path. As they go on their merry way, one forcefully kicks a bag of trash into the road. The boys are without fear as they do this. They’re also white.

This interlude lasts for less than 10 seconds, enough to notice if you’re paying attention, although DuVernay doesn’t linger on it or invite judgment. The astute viewer gets the point.  Those kids get to be kids. Antron, Kevin, Yusef, Korey and Raymond and millions of boys like them do not — at least, not without risking everything. They joined a large group of other boys in Central Park on a nice night in April 1989 and ended up paying for that decision by spending between six and 13 years in prison.

On that same night Meili’s run was interrupted by her attacker, she was badly beaten, sexually assaulted and left for dead. Meili remained in a coma for nearly two weeks and recalled nothing of the attack. No matter; police rounded up the boys and the prosecution, headed by an all-too-ready-to convict Linda Fairstein (Felicity Huffman) decide that constructing the appearance of justice for Meili is more important than the lives of five innocent teenagers.

DuVernay steadily depicts how the world at large stripped them of their humanity, redefining the term “wilding out” to become something sinister and transforming a large group of boys running around into a pack of predators. Then a bloviating Donald Trump, seen in here in archival footage, takes up the story, buying $85,000 worth of ads in four newspapers calling for their execution.

When a reporter asks Yusef’s mother (played by Aunjanue Ellis) about Trump’s call for the death penalty for her boy, Ellis’ rendition of a parent's protective and entirely justifiable hysteria is shattering.

“When They See Us” covers 25 years in its subjects’ lives, starting with those everyday banalities and dropping us suddenly into the brutality of their police interrogations. Episode 2 walks us through the first trial, with the third installment following Kevin, Antron, Yusef and Raymond (played as adults by Justin Cunningham, Jovan Adepo, Chris Chalk and Freddy Miyare) after they are released from prison. And the adult actors are extraordinary, particularly Adepo and Miyare, who shoulder the weight of the significant tensions Antron and Raymond confront upon their respective returns home.

DuVernay previously examines the myriad obstacles to resuming a normal life following incarceration in her 2016 documentary “13th,” and here we see these men and their families deal with these frustrations as they slam against limited employment options and their inability to escape the presumption of guilt.

The final episode is the series' most somber, focusing solely on the plight of Korey, played by Jerome through the entire series. The choice to have one actor portray both the juvenile and adult versions of Korey may seem strange, given that two actors play every other role.

But once we witness Korey’s story it makes sense. Out of the entire group, Korey was the oldest at the time of his trial and, at 16 years old, is remanded to an adult prison. There he survives vicious beatings and endures all manner of psychological torture. Difficult though this may be to watch, Jerome is utterly transfixing as he embodies Korey's departure from a wide-eyed, easily duped innocent into an adult who never completely hardens, but refuses to break and accept responsibility for a horrible crime he did not commit.

“When They See Us” showcases a number of veteran actors, with Williams, Ellis, John Leguizamo, Niecy Nash, Isis King and Kylie Bunbury leading with blood and sweat in their portrayals of the young men’s suffering family members. Huffman’s role is predictable to the point of near two-dimensionality; Fairstein has since made a name for herself as a best-selling author, but Huffman plays her as if she could be any unscrupulous lawyer working an angle.

Vera Farmiga, playing prosecutor Elizabeth Lederer, is allowed a mote of additional nuance given she knows what she’s doing is wrong but also realizes that politics requires that she win.

But along with Joshua Jackson (who turns in a sensitive performance), Blair Underwood, Christopher Jackson as the boys’ defense attorneys, and Famke Janssen, portraying the assistant district attorney who files the motion to vacate the conviction, the legal team players aren’t present for long enough to produce much of a resounding impact.

Instead, “When They See Us” is primarily a stage for the actors playing these boys and the men they become in spite of every threat and difficulty, and particularly for Jerome.

All the while cinematographer Bradford Young diligently captures each turn and flip of fate by making the utmost of the illustrative potency of lighting, framing each scene to underscore every emotional tinge.

It’s enough that he makes his subjects look radiant even in the most adverse circumstances, but the specificity with which he handles the cool and warm glow in each scene enriches the emotionality within the dialogue and depictions. The visual is the story here, and it does a brilliant job in telling its own part. Through the careful ministrations of Young, DuVernay and a superlative case, this is a series that  makes previously erased people seen and known. Art has few greater purposes than that.