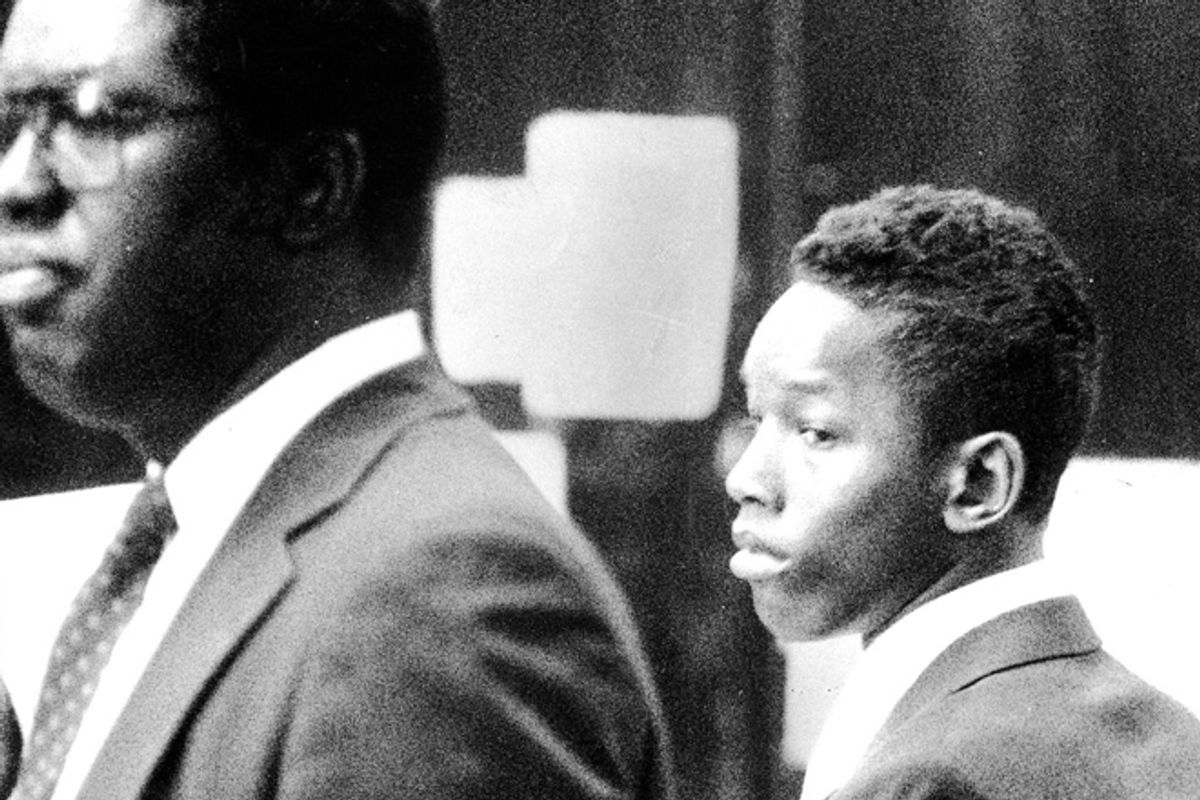 Colin Moore and Kharey Wise in "The Central Park Five"
--

If you lived in New York in 1989 – hell, if you lived in America in 1989 and were over 12 years old – then you remember the story of the Central Park jogger. It was a terrible case that seemed to epitomize everything that had gone wrong in America’s greatest city during the reigns of Ronald Reagan and George H.W. Bush -- the toxic combination of exploding Wall Street wealth, skyrocketing crime, the crack epidemic and worsening racial tension. This was the “Bonfire of the Vanities” New York, the “American Psycho” New York, in which newly created or reinforced classes, the super-rich and the alienated poor, faced off in nearly open warfare. The legendary power of that failing city is such that many contemporary visitors to New York still expect the Bronx to be on fire and Central Park to be an uninhabited zone of “muggers and trash,” in the words of my mother-in-law, and are startled by the affluent chain-store bustle of 21st century Manhattan.

Indeed, the jogger case did capture much of what was wrong with New York and America, but not exactly the way we thought it did at the time. It illustrated the way we respond to powerful narratives about race, sex and gender, even when they turn out not to make sense. It represented a massive failure of law enforcement, journalism and public imagination, and it led to the last major wrongful-conviction case of the 20th century. As is eerily depicted in “The Central Park Five,” a new film co-directed by legendary documentarian Ken Burns, his daughter Sarah Burns and David McMahon, what happened to a 28-year-old investment banker named Trisha Meili on a pleasant April night in 1989 fed all too perfectly into the public’s anxiety and hysteria.

Meili went running from her Upper East Side apartment through Central Park that evening, as she often did. Partway through her run, she was assaulted on a lonely stretch of park road and was severely beaten with a heavy object, stripped naked, raped and left for dead. When she was found a few hours later in the woods near 92nd Street, she was close to death from hypothermia and blood loss, and her skull had been so badly fractured that one eye was out of its socket. That she survived at all was remarkable; that she regained most of her faculties and an adult level of physical and mental competence was a miracle. (Meili revealed her name in 2003 when she published a book, but such was the divisiveness of the case that black-oriented newspapers and radio stations had already made it public, in defiance of the usual convention.)

Very rapidly – much too rapidly, in retrospect – the police rounded up a group of teenage boys, a subset of a much larger group of 25 or 30 kids from Harlem who had apparently been roaming through the park that night, up to no good. Some of the boys had attacked a homeless person, a couple riding bicycles and a male jogger near the Central Park Reservoir (although, to be clear, the kids accused of the Meili rape insist they had nothing to do with any of that). As longtime New York newspaper columnist Jim Dwyer observes in the Burns film, what happened next was understandable: The Meili attack occurred not far away from where teenage boys were known to have assaulted other people at about the same time. From a law enforcement point of view, it was logical to assume, at least initially, that there was a connection.

And so it was that five juvenile defendants, all of them between 14 and 16 years old – Antron McCray, Kevin Richardson, Yusef Salaam, Raymond Santana and Korey Wise – became the focus of an entire city’s pent-up frustration about crime and urban decay. The symbolism was just too much: five dark-skinned youths running wild in the night versus a slight, pretty, high-achieving white woman who worked for Salomon Brothers. New York’s tabloid headline writers and TV talking heads went nuts, unleashing animalistic stereotypes that seemed to belong to the Jim Crow South rather than a modern, multicultural city that was about to elect its first black mayor. The teenagers were repeatedly described as a “wolf pack” engaged in a ritual gang activity called “wilding” (a term possibly made up or misheard by a police officer).

Feminist activists, understandably angry about the slipshod or careless investigation and prosecution of sex crimes, jumped on board. The prosecutors assigned to the case, Linda Fairstein and Elizabeth Lederer, were legitimate female pioneers and made it clear that this case would be different. After police announced that four of the five kids had confessed to the assault -- following a day and a night of sleepless and lawyerless interrogation – it essentially never entered anyone’s mind that they might not have done it. Then-mayor Ed Koch, to his everlasting shame, went on TV and urged people not to believe the defendants’ mothers’ protestations of innocence. As the Rev. Calvin Butts, one of New York’s most eminent black preachers, puts it, many African-Americans had become afraid of their own children in those years, and most people in the black community were content to surrender these boys to their fate and move on. (Four of the five defendants were African-American, while Santana is mostly of Latino heritage.)

All four of the boys who had confessed recanted before trial, saying they had been coerced into implicating each other in a crime they knew nothing about. Even more strikingly, Fairstein and Lederer had no physical evidence linking the boys to the victim, which was remarkable considering the amount of blood and other bodily fluids found at the scene. Semen found in the victim’s body did not match any of the defendants, and no traces of her blood, hair or skin could be found on any of them. (In fact, even in 1989 the crime-scene analysis indicated that all the DNA evidence found on Meili’s body came from a single, unknown person.) So the entire case rested on an incoherent web of confessions that were contradictory on nearly every detail: The boys could not agree on what Meili looked like, what she was wearing, where or when she had been assaulted, or who had done what to her. As Dwyer notes, the chronology of events that police provided to journalists didn’t make sense, and it even provided a likely alibi: Meili’s running route would have brought her to the place where she was assaulted around 9:20 p.m., when the defendants had been seen by multiple witnesses near the reservoir, about half a mile further south.

None of that mattered. All five were convicted and served prison terms ranging from 6 to 12 years, and to this day quite a few people insist that they are “most likely” guilty (to borrow the weasel words of an internal NYPD investigation). That's despite the fact that in 2002 Matias Reyes, a serial rapist with multiple convictions, confessed to the crime, providing specifics that no one else could have known and that closely fit the forensic evidence. (He was already serving a life sentence and had little to lose.) His DNA, which police and prosecutors had in their files all along, was a perfect match with the samples found on Meili.

Relying on Dwyer’s reporting of the case, interviews with other experts and extensive discussion with the five defendants, who are now adult men in their 30s (McCray declined to appear on camera, but his voice is heard), “The Central Park Five” should go a long way toward demolishing any remaining doubt about guilt or innocence in this 23-year-old rape case that has cast such a long shadow. As Dwyer says, the coverage of the five men’s official exoneration in 2003 (when a judge ordered their convictions vacated) was arguably worse than the coverage of the initial case. It was plagued with resentment, resistance and denial, as if we didn’t want to face the fact that this perfect story of New York’s nightmare years had turned into another kind of story altogether: a story of racism, paranoia and groupthink; a story of injustice piled on top of injury and of one terrible wrong compounded by another.

“The Central Park Five” is now playing in New York and Los Angeles, and will be available on-demand from cable, satellite and online providers, beginning Dec. 7. It will also air on PBS early in 2013.