A leaked letter reveals the White House seeks to form a coalition to oppose U.N. support for reproductive rights 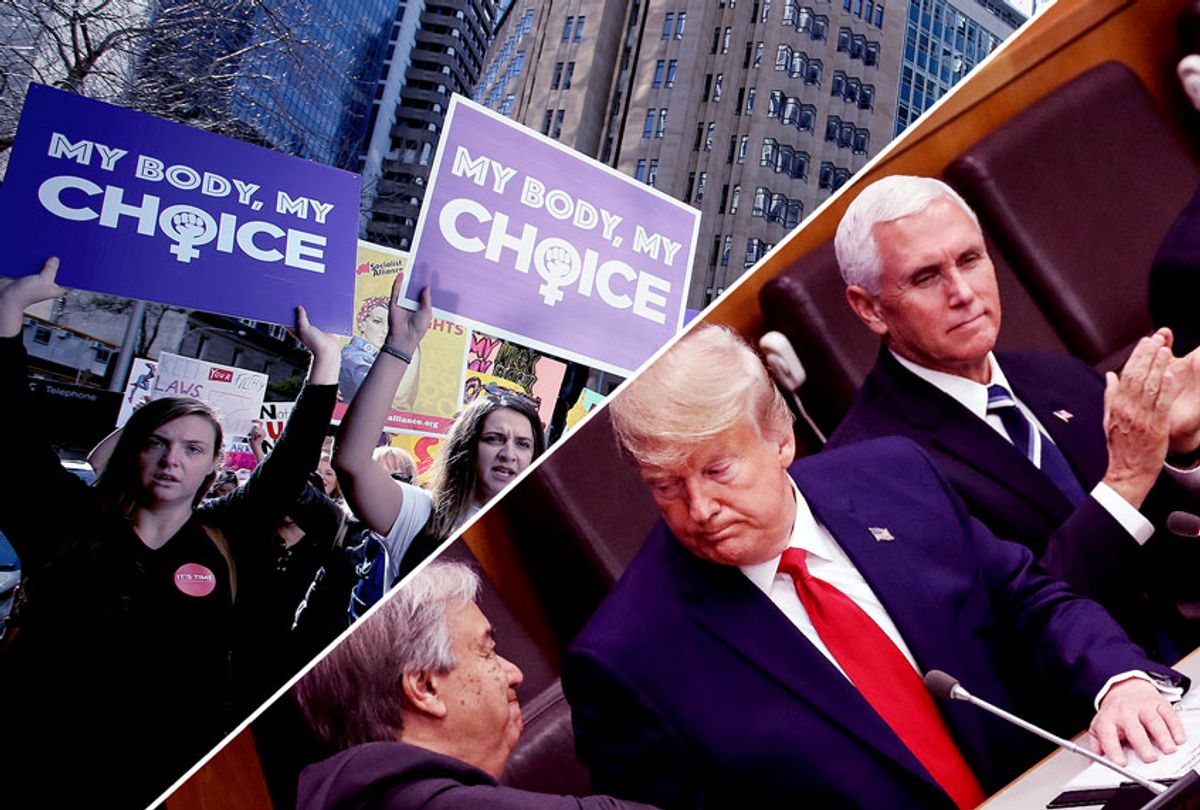 The Trump administration reportedly called on member states of the United Nations to join a "growing coalition" of countries opposed to laws that affirm the right to legal abortion, in what appears to be the latest effort by the White House to roll back sexual and reproductive rights.

The move was allegedly proposed in a letter that was signed by Secretary of State Mike Pompeo and Health and Human Services Secretary Alex Azar, the Guardian reported. The letter reportedly urges governments to sign a joint statement opposing "harmful" U.N. policies meant to promote and ensure sexual and reproductive health and rights around the world.

"As a key priority in global health promotion, we respectfully request that your government join the United States in ensuring that every sovereign state has the ability to determine the best way to protect the unborn and defend the family as the foundational unity of society vital to children thriving and leading healthy lives," the letter reads, according to the Guardian.

"We remain gravely concerned that aggressive efforts to reinterpret international instruments to create a new international right to abortion and to promote international policies that weaken the family have advanced through some United Nations fora," it continues.

"These approaches undermine our shared commitment to sustainable development and to achieving health for all, leaving no one behind," it states, adding that efforts to advance such policies at the U.N., particularly at the World Health Organization, were "disturbing and must be challenged."

The letter, expected to be presented Monday at a high-level meeting on universal health coverage at the U.N. General Assembly, reportedly calls on governments to "work together to achieve an outcome document . . . that reflects our shared values."

It is reportedly similar to a letter that was delivered to the World Health Assembly in May, and signed by Brazil, Egypt, Ghana, Haiti, Indonesia, Iraq, Nigeria, Saudi Arabia and the U.S. That statement argued that "ambiguous terms and expressions, such as the right to sexual and health reproductive health (and its derivatives) in the context of the WHO . . . cause confusion and misunderstanding."

"Such terms do not adequately take into account the key role of the family in health and education. Furthermore, they have become associated with pro-abortion policies and measures," the May letter read. "We therefore request that the WHO focus on terms that enjoy broad consensus among member states."

The Trump administration has made repeated attempts to remove references to sexual and reproductive health in U.N. documents, on the grounds that such language imply support for abortions.

In April, the U.N. omitted references to sexual and reproductive health from a security council resolution on combatting the use of rape as a weapon of war after U.S. officials threatened to veto the measure over the references.

The U.S. previously sought to eliminate the word "gender" from U.N. human rights documents, most often replacing it with "woman," seemingly in an effort to exclude protections for queer, transgender and gender non-conforming individuals.