Fox News judge weighs in on Trump's Ukraine scandal: "If this is true, this is an act of corruption" 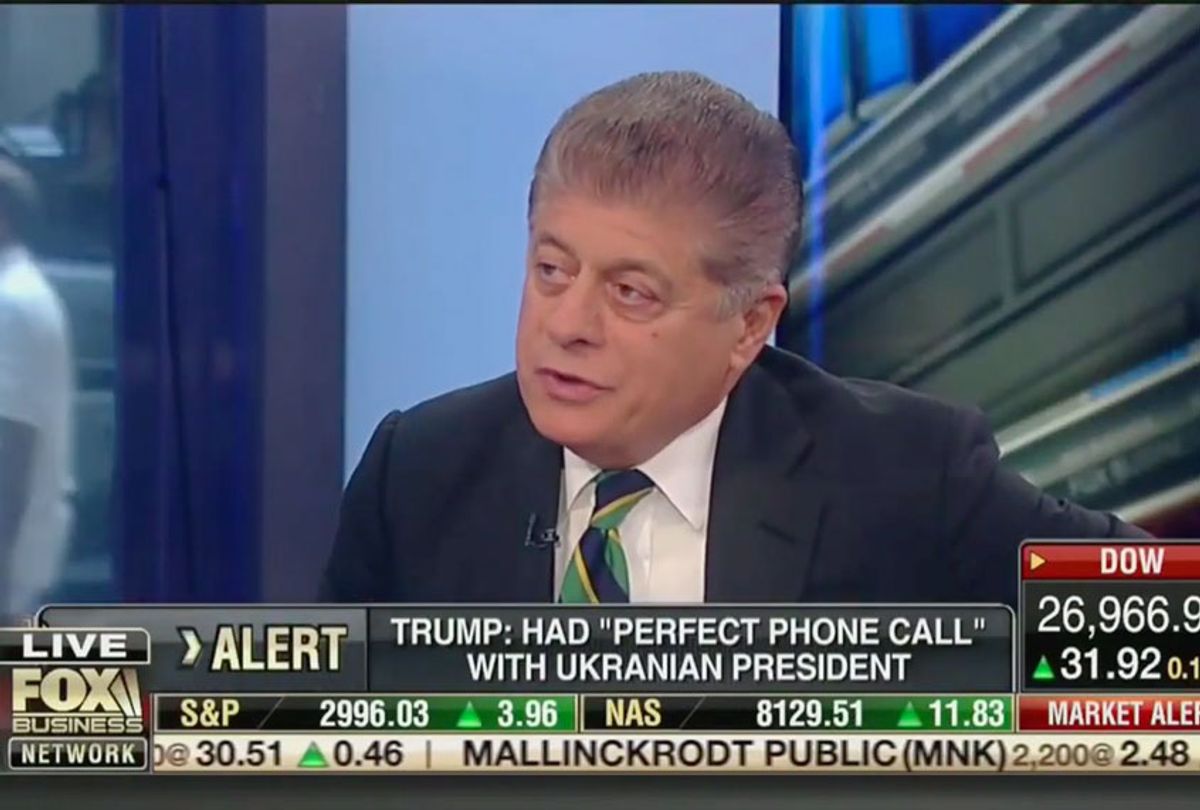 "This is the most serious charge against the president — far more serious than what (former special counsel) Bob Mueller dug or dragged up against him," Napolitano said.

"If there was a quid pro quo," Napolitano continued. "It does appear as though a quarter of a billion dollars in defensive weaponry was held back for a period of time while these eight conversations were going on between the president."

Over the past few days, news reports revealed that Trump allegedly asked Zelensky to investigate Hunter Biden during a July 25 call between the two world leaders. President Donald Trump confirmed on Tuesday that he withheld military aid from Ukraine, claiming he did so amid concerns that the U.S. was contributing more to Ukraine than other European nations were.

"My complaint has always been — and I'd withhold again, and I'll continue to withhold until such time as Europe and other nations contribute to Ukraine," Trump told reporters at the United Nations General Assembly. "Because they're not doing it."

The president was responding to a report from the Washington Post, which revealed that Trump had directed his acting chief of staff, Mick Mulvaney, to withhold nearly $400 million in military aid for Ukraine for at least a week before Trump spoke to the nation's leader. The call between Trump and Zelensky is reportedly at the center of a whistleblower complaint filed by an intelligence officer to Intelligence Inspector General Michael Atkinson.

Hunter Biden served for nearly five years on the board of Burisma Holdings, an energy company based in Ukraine, whose owner came under scrutiny by Ukrainian prosecutors for possible abuse of power and unlawful enrichment. Hunter Biden was not accused of any wrongdoing in the investigation.

Fox Business host David Asman on Monday pointed to a report by the Wall Street Journal, which noted that the mid-July call between Trump and Zelensky did not reveal a specific quid pro quo.

"If you are the president of the United States and you are making a conversation that you know your intelligence community is listening to, of course you're not going to articulate a quid pro quo," Napolitano replied. "You'll just make the quid pro quo happen."

Trump, for his part, essentially admitted to threatening to hold aid to Ukraine on the call if Zelensky did not urge officials to investigate alleged "corruption," related to Biden and his son. The president told reporters Monday, "If you don't talk corruption, why would you give money to a country that you think is corrupt?"

Asman then noted reports that alleged Biden, while vice president, pressured Ukraine to fire its top prosecutor, Viktor Shokin. He claimed Biden voiced a "direct quid-pro quo" when he reportedly threatened to withhold $1 billion in loan guarantees unless the nation's leaders removed Shokin.

Trump and his personal lawyer, Rudy Giuliani, have spun the event as a major scandal, even though no evidence has emerged that Joe Biden attempted to help his son by pressing for Shokin's dismissal. Additionally, Biden and other Western officials have argued for a while that Shokin should be fired over his alleged dismissal of corruption in his own office and among the political elite.

Asman on Monday reiterated claims made by Giuliani that Shokin was actively investigating Hunter Biden's company at the time of his dismissal, a claim which has been debunked.

Napolitano then noted that while the latest reports will likely "end" Biden's Oval Office ambitions, they do not "diminish one iota what the current president is doing."

"If it is true — we haven’t seen the whistle-blower complaint, and under the law it has to be revealed," he continued. "If this is true, this is an act of corruption."

Hours later, Napolitano reiterated his belief that Trump's alleged actions were "far more serious" than anything detailed in Mueller's report. He then issued an on-air correction for comments he made earlier about Biden's campaign.

"Last time I was sitting here, Dave Asman was filling in for Neil [Cavuto], and I said this might jeopardize Vice President Joe Biden's campaign — it might even be the end of it," he told guest host Charles Payne. "I believe I was wrong."