She alleges she was raped by a Lyft driver. Then the company ghosted her

Alison Turkos, who says she was kidnapped and gang-raped by a Lyft driver, tells her story to Salon 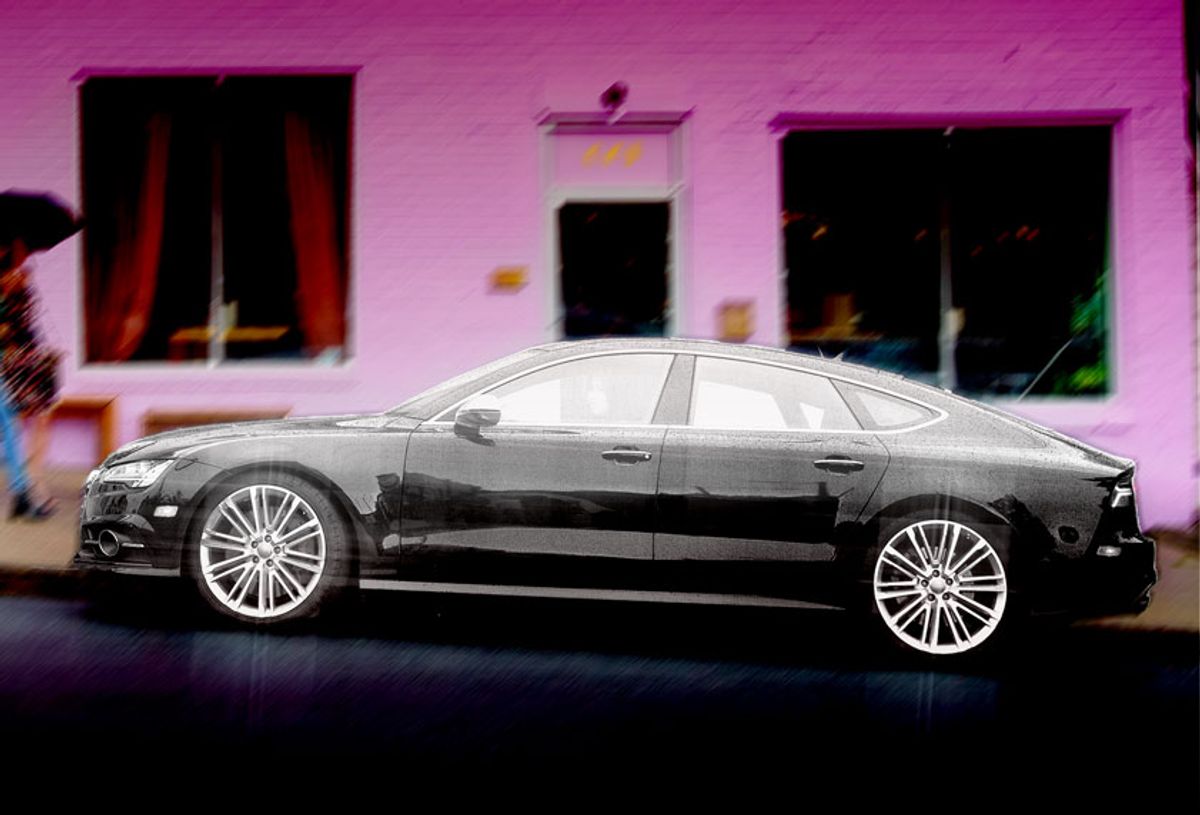 Lyft is being sued again by a woman who says she was raped by a driver, who drove her from New York City to New Jersey, after using the ride-sharing app to summon a car. Alison Turkos, the victim in the lawsuit, alleges that Lyft "has known of the ongoing sexual assaults and rapes," but has failed to do enough to prevent the problem.

Citing the company's promise that "safety is our top priority," the lawsuit alleges this is not true, and that the driver who is accused of kidnapping Turkos for a gang rape was "nonetheless allowed" to keep driving for the company, "endangering countless other passengers."

In an emailed statement, Lyft said that what Turkos describes is "something no one should have to endure" and "we have invested in new features, protocols and policies to protect our riders and drivers." They also flagged a partnership "with RAINN, the nation’s largest anti-sexual violence organization".

Salon's Amanda Marcotte spoke with Turkos about her allegations and the lawsuit against Lyft. (Full disclosure: Turkos is a friend, who has cat-sat for Marcotte in the past.)

I want to be clear: Reiterate as many details or not as you want about the actual assault.  I don't need you to rehash that during this interview if you don't want to.

I was out with two friends and we were at a bar in Brooklyn in Crown Heights. They wanted to stay out and I had just hit a wall. I'd had a really intense week. The Harvey Weinstein news had recently broken, and I'm having a really hard time with the news. Prior to October, 2017, I had been sexually assaulted twice in my life, and so the news was just hitting me really hard.

I order a Lyft around 2:30 AM and I get into the car because I was going from Crown Heights to Williamsburg.  And so I wanted to be safe. That's what these ride share companies tell us:  We'll get you home safe.

What should have been a three mile and 15 minute ride home turned into an actual living nightmare. I get into the car, and I closed my eyes and then I was still awake as we were going over the Manhattan Bridge, leaving Brooklyn going into Manhattan. As you are well aware, you don't need to go over a bridge to go from one place in Brooklyn to another.

Originally I thought, oh this dude is just trying to like scam me out of 20 bucks, like he had assumed that I was probably asleep. So I started knocking on the window, and saying like, I want to go to Williamsburg. He was just saying, you're fine, it's fine.

At one point he said shut up. So I thought to myself, at the first red light, I'm just going to hop out. I'm just going to eat this 20 bucks. At the first red light, I attempt to get out of the passenger side back door, but the door won't open. But I think, oh, this poor guy, he doesn't have the money to fix a car. This is we, as women do, when we're in a very scary situation, we like talk ourselves down.

I slide over to the driver's side passenger door, and at the next red light, attempt to open that door, and that door will not open. That is then when sheer panic sets in. I'm wearing these metal bangle bracelets, they're really making noise. Between that, my heavy breathing, the noise of me trying to pull the door handle to the point that I think I'm going to break it.

Then the driver pulled the gun on me. And the only words that he says to me are "shut the fuck up." My hands go up, and I just lean into the back of this seat.

He puts the gun away and continues driving. I don't say a word, I don't move. We continue to drive through the tunnel into New Jersey. I assumed this person is bringing me here to kill me and then to dispose of my body. We enter a space in New Jersey and there's no one else around except for a car and two men who are waiting for us.

The car is parked, the driver gets out, he has a conversation with these other two men. The three of them approached the back of the car, the driver opens the door while holding the gun, forcibly tells me to get out of the car, take off my clothes. He's still holding the gun at this point. He then tells me to get back in the car and to lay down and I'm laying in the back seat and then the three of them take turns gang raping me for like anywhere between like 20 and 23 minutes. During this time they're cheering each other on.

They're taking turns and they're high-fiving each other and they're laughing and they're saying things to each other or to me as if to make it seem or appear as if the rape is consensual, like, doesn't it feel good?

This is not the first time that I've been sexually assaulted. So one of the things that I've inherited from myself is the ability to disassociate during rape. I'm attempting to like close my eyes, leave my body, not be present. When they have decided that they have finished, the driver forces me to put my clothes back on, get back into the car. Driver, gets back in the car, no words are exchanged.

And he drives me back to my original desired destination of Williamsburg, Brooklyn. And he parks in front of the apartment building and he says to me, have a good night. I open the door and I now realize that, at some point, he must've disengaged the child safety locks. And then I like walk across the sidewalk into the apartment building. That's the last memory I have.

It's $106. I look at the map and I see that my ride took me to New Jersey the night. I screenshot it two friends. One responds immediately and, obviously, he was panicked. I start to realize I had vaginal bleeding and discomfort.

I engaged in a lot of victim blaming, on an individual level. And I was like, how did I let this happen to me a third time? Like, no, this isn't possible and I have no memories of it.

I file a written complaint with Lyft, just say my driver took me to New Jersey last night. Then I realized this needs to be elevated to an actual person. I called Lyft, and what this person on the phone says to me is, he may have just made a mistake and close out the ride.

I'm emotionally and mentally distressed. It's like, yeah, no, I just, I think you're wrong, but I don't have the ability to advocate for myself in the moment. So he's like, we're going to un-pair you from the driver and we'll refund you 92 dollars and 99 cents. So I'm just like, okay, sure. And then I try to sleep, obviously don't, and then the next day I follow up with Lyft and I say to them, I'm still confused by this.

It doesn't make sense. I'm seeing an 80 minute ride. None of this makes sense. And they then blame me and say, this can happen because you didn't update your app, your phone software, your iOS system isn't updated or you had poor network connectivity.

And then finally, I said to Lyft, I'm considering filing a police report. And then Lyft ghosted me completely. The next day I went to a local hospital in Park Slope Brooklyn with my best friend, filed a police report, and had a forensic rape kit done.

(In response, Lyft says Turkos did not initially report this as a safety incident, but an "indirect route". Salon has reviewed the emails, which indicate that while Turkos did not use the word "rape" in emails, she told them her driver took her to New Jersey and she wishes for Lyft to help her file a police report.)

How is the police situation is working on your end?

From the jump, the NYPD just completely neglected my case and mishandled my case, which why I filed a lawsuit against the NYPD earlier this year.

There's a lot of issues going on here with Lyft, but at the center of your case, it seems to me,  is the fact that Lyft works on a contract basis with drivers. Drivers literally just start an account and start working with them. What kind of measures would you like to see be put in place so that not just anybody with a car can just start picking people up?

Yeah, I mean I think that's a really great question and I think there's sort of, there's like multiple layers here that I really, I struggle with. The thing is, it is not my job to solve Lyft's problems. I don't work within law enforcement, I don't work for the FBI. My only job is to heal. Lyft is not paying me to develop apps. There are thousands of people who have incredible degrees who are executives and board members and in jobs like that. And that is for them to do. It is not for me to do. My trauma does not need to make me solution oriented.

It just seems very obvious to me that Lyft is just like Candyland for men who want to do stuff like this. This just a very fundamental problem and may be an unworkable problem.

In a statement that Lyft distributed earlier this week where they say that this particular driver had a license and was regulated by the Taxi and Limo[usine] Commission of New York City. It's just a way for them once again to completely get out of being responsible and holding themselves accountable.

We were in that space in New Jersey for X amount of minutes. What if I hadn't woken up? Were there other women who were on their way? These are questions, with my depression and PTSD and anxiety, that just run through my brain. This is another reason why I just don't sleep.

When women sue like this, over sexual assault, they're often accused of trying to gain something from this, trying to profit. So I want to give you an opportunity to explain your motivations in suing Lyft.

There are many other women who have filed lawsuits prior to me, but those women have chosen to remain anonymous. And I am for ever grateful and inspired by them. I have chosen to put my name publicly on this lawsuit. I think one of the reasons that why that's important to me is because I want Lyft to know that I am a human.

I have a face. I have a name. I am not afraid of them. They are a multi-billion dollar tech company. I want to hold them accountable. I want to know what's happening. They've known that sexual assault and rape have been happening under their watch. If their leadership claims that safety is their number one priority, my trauma and their response to my trauma proved otherwise. And I want them to know exactly who I am and what happened to me.