Pressuring vulnerable Republicans on impeachment: Key to flipping Senate in 2020? 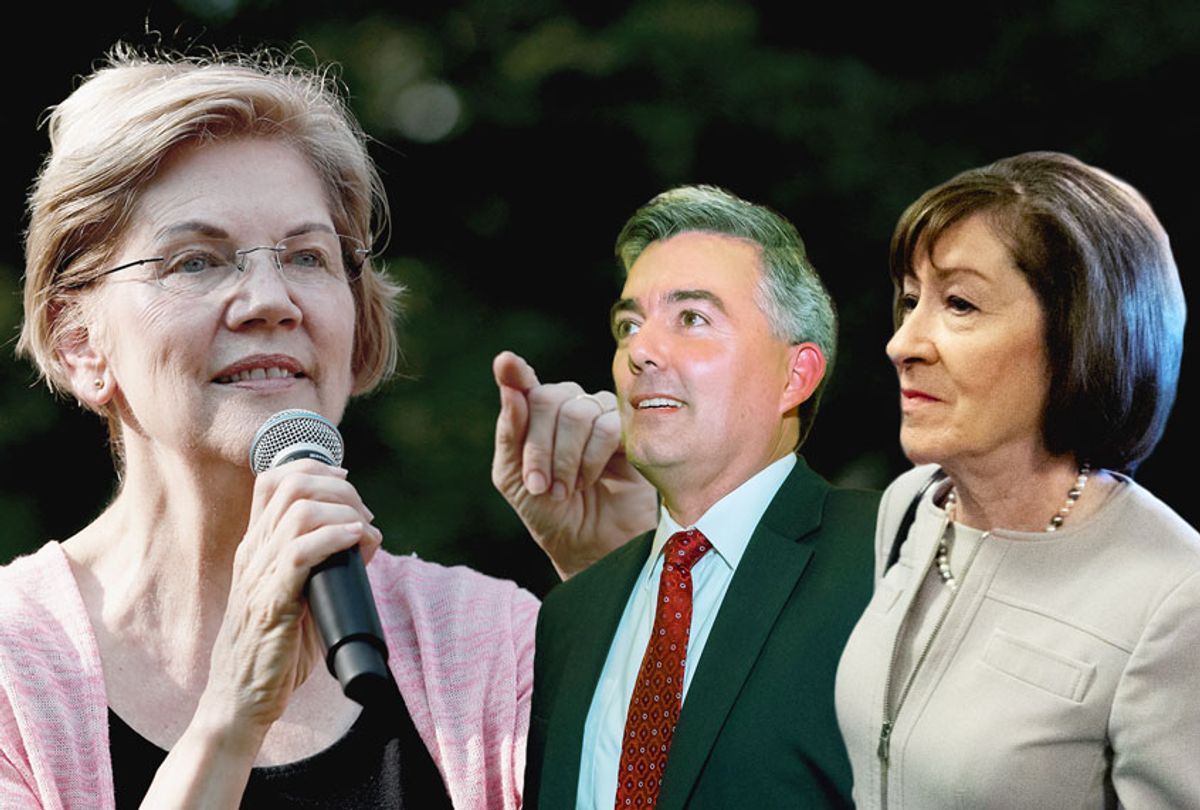 As we’ve long heard from Democrats and Republicans alike, impeachment is political. The constitutional remedy to presidential malfeasance and impropriety effectively allows members of Congress to upend the results of an election, and therefore has been seen as a maneuver likely to draw sharp rebuke from voters. The example most often cited is Bill Clinton’s impeachment in 1998, which actually improved his standing in the polls. What’s often left unsaid about that example, however, is that the subsequent presidential election was won — or at least tied —by George W. Bush and the Republicans.

After years of idle threats and a mounting buildup of offenses by President Trump, Democratic House leaders finally appear ready and willing to get political. Democrats won control of the House in last year's midterm elections, but have thus far been totally ineffective at curtailing the actions of the president. Subpoenas, investigations, hearings and resolutions have produced nothing, and it looks like House Speaker Nancy Pelosi has finally realized they never will.

After months of stalling, Pelosi abruptly changed direction and announced a formal impeachment inquiry on Tuesday. This comes after a cascade of House Democrats voiced new support for impeachment, largely because the White House has blocked the release of an intelligence community whistleblower’s complaint to Congress, which is required by law. Perhaps most notably, 11 House Democrats who support impeachment represent districts won by Trump in 2016. They’ve now made the political or moral calculation that impeachment is both necessary and prudent. (There is no reason to believe they are willing martyrs to the cause of accountability.)

But beyond pure politics, another argument against impeachment has been to note that it's likely to be a futile endeavor. Republicans still hold 53 seats in the Senate, the body which would hold an impeachment trial and issue a verdict, and there is zero evidence to support the idea that they have any interest in holding Trump accountable. At least until now, elected Republicans' political calculus has been driven by a need to appeal to their base, which remains unflinchingly loyal to the president.

Insufficient Trumpiness has already caused otherwise conservative Republicans to seek early retirement rather than face an inevitable primary challenge from their right. To counter that debilitating phenomenon, Democrats must apply equal pressure from the other direction.

On Tuesday, the Senate unanimously agreed to a resolution calling for the whistleblower complaint — which we now know to be partly about Trump's phone conversation with Ukrainian President Volodymyr Zelensky — to be turned over to congressional intelligence committees immediately. So at least officially, every Senate Republican joined with every Democrat to call on the Trump administration to cough up the whistleblower complaint, and not just a transcript of the Zelensky phone call, as Trump offered hours earlier.

Sen. Richard Burr, R-N.C., who heads the Senate Intelligence Committee, announced that he plans to open his own probe of the Ukraine scandal and is seeking an interview with the whistleblower this Friday. Even Senate Majority Leader Mitch McConnell, who has said he won't address "hypotheticals" about impeachment, said on Tuesday that the "responsible" way to learn more about the whistleblower complaint is through the bipartisan intelligence committee process.

So while Republicans in the House ramp up their defense of Trump — one GOP lawmaker even  introduced a measure to remove Rep. Jerry Nadler, D-N.Y., as chairman of the Judiciary Committee — it appears that Senate Republicans may be finally ready to exercise some degree of constitutional oversight. That’s why an email sent by Elizabeth Warren’s campaign on Tuesday may prove to be a pivotal strategy for Democrats.

The message from Warren's campaign manager to supporters indicated that the Massachusetts senator plans to devote staffers to helping win back the Senate.

We're hiring state directors and organizers in a number of states that have primaries and caucuses in March. And we're targeting our resources to invest in places that will be critical to keeping the House, taking back the U.S. Senate, and regaining ground in key state legislatures in 2020. That includes states like Illinois and California, where Democrats won a whole bunch of House seats in 2018 in close elections that we'll need to defend. It also includes states like Maine, which has a competitive Senate race and Georgia, where there will be two Senate seats up for election.

So far only one Republican senator, Mitt Romney of Utah, has voiced concern on the record about the president’s alleged actions, tweeting that if Trump “asked or pressured Ukraine’s president to investigate his political rival, either directly or through his personal attorney, it would be troubling in the extreme.”

Even top Trump ally Sen. Lindsey Graham, R-S.C., who chairs the Senate Judiciary Committee, has called on Trump to clean up his Ukraine mess. “I would urge him to continue to be as transparent as possible and tell us as much as he can without compromising executive privilege, so that we can understand what happened,” Graham said in an interview with conservative talk radio host Hugh Hewitt.

Of course impeachment will die in the Senate, as it did with the previous two U.S. presidents who were impeached. At most, there are 10 or 11 Republicans up for re-election in 2020 who will face competitive races. If every single one of them voted to convict Trump (which is unlikely in the extreme), that would only make 58 of the 67 votes needed to remove him from office. But the push to pressure vulnerable GOP incumbents on impeachment can come with a secondary effect: Flipping the Senate.

Calling it a “serious issue,” Sen. Cory Gardner of Colorado said he is “going to get to the bottom” of Trump’s dealings with Ukraine after Pelosi announced an impeachment inquiry. Gardner is perhaps the most vulnerable of all Republican senators in 2020, facing a state won by Hillary Clinton where every Democratic House member now supports impeachment. Expect Joni Ernst of Iowa, Thom Tillis of North Carolina and the ever-concerned Susan Collins of Maine to make similar noises. (Those four states, in all likelihood, will determine who controls the Senate in 2021.)

Nearly all national polls, even those still showing that impeachment is not particularly popular, tell us that Trump is a deeply unpopular president. Democrats would be wise to force embattled Senate Republicans to defend him against credible accusations of flagrant impropriety. The Ukraine whistleblower issue is simple enough for the public to grasp, and is just one of many impeachable offenses committed by our president. If it's not enough to bring down Trump, it might be enough to break Republican power in Washington — which every Democratic presidential needs to have any chance at promoting a progressive or center-left agenda.