In times of crisis, "Fox & Friends" turns to unimpeachable pancakes

These morning show hosts pour it on thick to mask their distaste of reality. 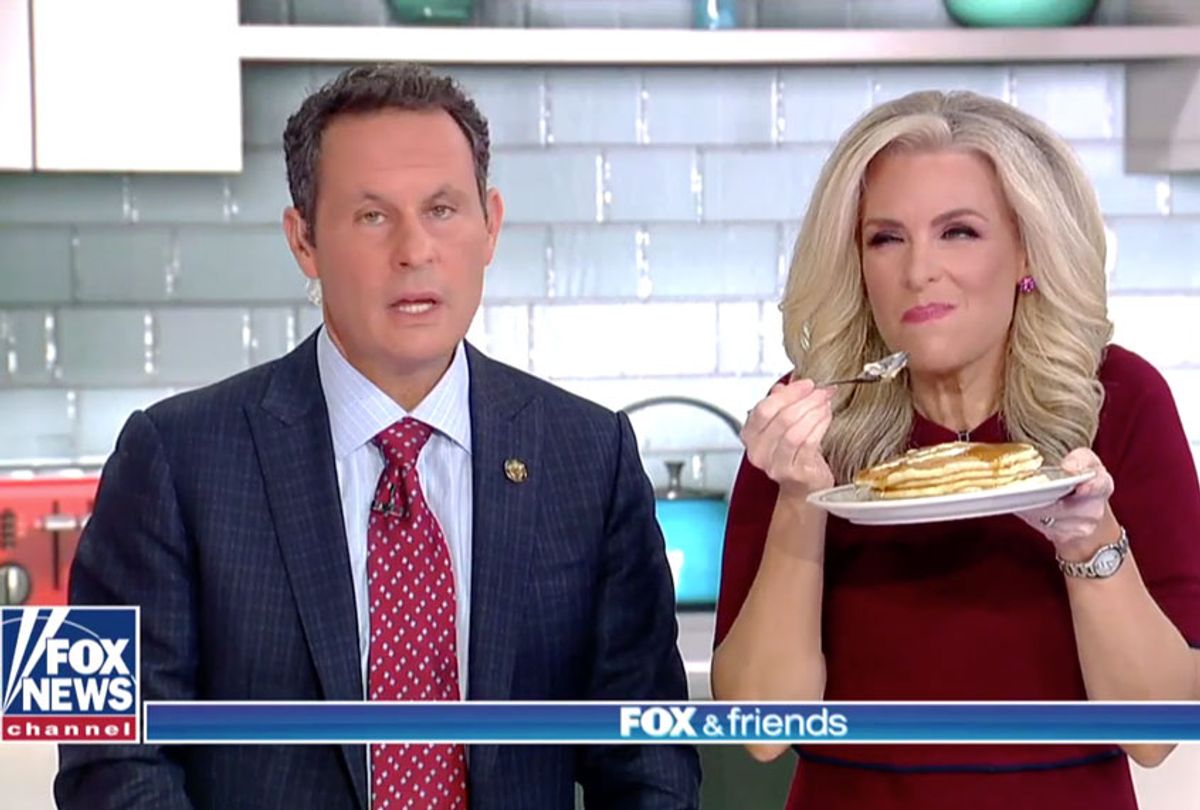 "Fox & Friends," which is billed as a cable news show, is not and or should not be considered news. They are nothing more than mere Trump supporters. They work extremely hard at proving this, and we need to listen to them.

Agencies who call themselves news organizations have the responsibility of reporting, educating, and alerting the public on important events and information – especially in urgent times, like now,  when that information can interpret or expose elevated levels of corruption in the government we expect to serve us, a government we pay taxes to, evidence of treason, impeachment proceedings, and the potential removal of sitting president. All things that are currently happening.

And in the midst of all the Trump and Ukrainian controversy, the alleged Biden probe, the impeachment memo, and the future of our country ... "Fox & Friends" chose to run a segment on pancakes, gluten friendly pancakes. (Gluten friendly because the batter lacks gluten; however, they are fried on equipment that touches regular gluten pancakes, which means they don't qualify as gluten-free.) Yes, this is a news/talk morning show, but to choose to devote so much airtime and energy to a fake national holiday while the nation has bigger concerns is just stomach-turning.

The segment, which can be viewed below, opens with Janice Dean gleefully swinging her arms from left to right like a proud scout as she marches across the stage toward  her equally happy cohost Steve Doocy, Ainsley Earhardt, Brian Kilmeade, and a table full of pancakes singing, "It's National Pancake Day!" There, Dean proceeds to stuff her face full of buttery gluten friendly pancakes while Kilmeade provides viewers with the most uninspiring, unnecessary history of pancakes to ever be displayed on a teleprompter – including IHOP being founded in 1958 and how the restaurant deciding to make pancakes international instead of just American, caused “the world to come together, and there were no more wars or disagreements.”

Maybe that was a joke or maybe it wasn't, but it's a statement that's far too glib for a subject that is so loaded, especially on a news network. It seemed like Kilmeade doesn’t realize that we have had troops on the ground and have been in conflict with Afghanistan since 2001. To date, we lost 2,372 American troops to the war in Afghanistan, and pancakes cocktailed with bad jokes are incapable of healing all of the pain and trauma that comes with death. Kilmeade doesn’t have to know about or acknowledge real world issues because Fox and Friends is not news, it is a news show that has nothing to with news.

"When I go into IHOP I'm always amazed, I'm always amazed about the, the way we're coming up with different ways of flavoring syrup,” Kilmeade passionately said during one highlight of the segment. “I mean, just, you thought a lot of sugar and sap and just putting a funnel in a tree was enough. But now, there's blueberries."

The "Fox & Friends" cast and crew will probably really flip their lids when the restaurant introduces their seasonal pumpkin spice pancakes. I'm not saying that pancakes don't taste good, but why can't these people prioritize? Seriously – what is wrong with Fox, and why are so many people OK with this behavior?

It seems like the entire network suffers from intense anosognosia. They pretend to be free of bias, while taking any and every opportunity available to praise their biggest fan, President Trump; however, when, he’s caught with his hand so deep in the cookie jar that not even his best right-wing minions and spin-lackeys can find the words to hide the obvious corruption, other than deflecting to Biden or Hilary – they switch to covering pancakes and different flavors of syrup. Any cheap attempt to evade the truth and preserve the legacy of President Trump. Even if that means ignoring the values of journalism, ignoring the integrity our country constantly promotes, lying to viewers or simply acting like these events are not happening. But these events are happening and pretty soon Fox, Trump and Friends will be left with nothing to report other than the gross amount of strategies they will try use in a disgusting effort to save face. Blaming all of Trump's missteps on Democrats rather than holding him accountable for his actions.

Because Fox isn't news; they are just Trump allies.