"The Politician" is a show about ambition – Ryan Murphy's 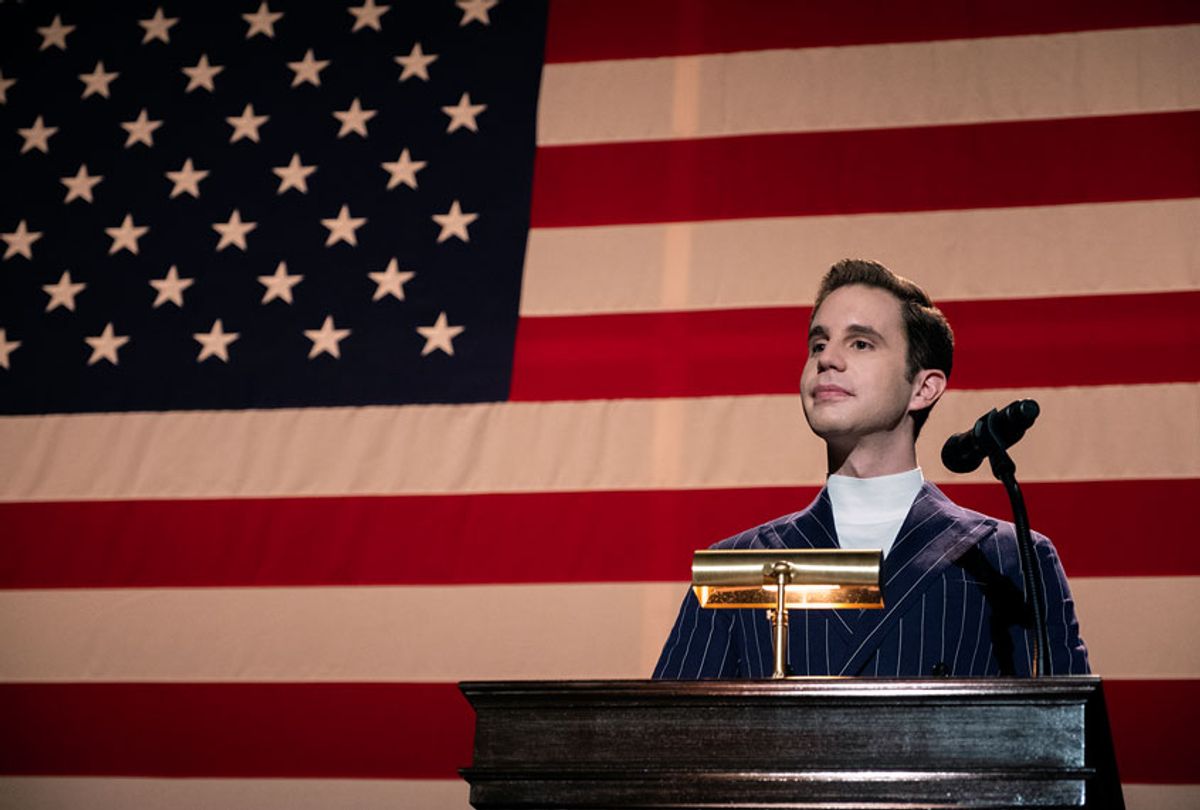 Ben Platt in the Netflix series "The Politician" (Netflix/Adam Rose)
--

Ryan Murphy signed a $300 million deal with Netflix, and to show for it, his first new series "The Politician" has made what could be the greatest baller move a TV auteur could possibly pull off: he's made an eight-episode pilot.

If the purpose of a pilot episode of any series is to sell the audience on the story's potential, then that's the only explanation as to why seven of the first season's eight episodes can feel so pointless, and nevertheless leave a viewer curiously invested in seeing a second season by the time the end credits roll on Episode 8.

That final installment is the big "oh" in answer to all the questions of why we're putting up with so much shallow, pointed perk and deliberate wit that comes before. In that episode,  we see that everything Murphy and his co-creator Brad Falchuk and Ian Brennan presented before that was prologue, as if to say, "In case you were thinking that this is a series presenting a high school election as an outsize allegory of our poisoned political system, it's not actually that. It's really about…"

We'll get to the second half of that sentence in Season 2, I guess, which guarantees that we'll be treated to the sight of Judith Light and Bette Midler fully unleashed. The legends make their first and only appearance in that finale episode, but the work they do in that installment gives "The Politician" its fire and purpose.

A show like "The Politician" could only happen on Netflix, a streaming service whose motto might as well be, "Keep watching, it gets better." Murphy's brand and style fits that ethos incredibly well; even when the A-plot is at its most ridiculous and peripatetic, the cinematography and color-drenched scenery is mesmerizing enough to take your attention hostage. And the credits are positively arresting — you might not ever hit that "Skip Intro" button.

Every time when the overall silliness of the story overwhelms common sense, the next scene reminds us that Gwyneth Paltrow is in this mess, and she does look stunning in daytime couture.

These baubles and a well-placed song or two ease our endurance of the tumultuous political beginnings of Payton Hobart (Ben Platt).

Payton is the studious, tightly-wound Type-A high schooler who has his eye trained on the presidency. Not only his high school's – Payton is convinced that he is a future President of the United States, steadily laying what he sees as the correct foundational bricks required to secure his ascendance to the Oval Office.

His game plan is tight enough to earn him the loyal respect of his campaign team, including his best friend James (Theo Germaine) and advisor McAfee (Laura Dreyfuss), and his girlfriend/Lady MacBeth Alice (Julia Schlaepfer), who is as calculating as he.

But his strategy is thrown for a loop when his good friend and secret lover River (David Corenswet), pulls an unexpected move and runs against him. River's girlfriend Astrid (Lucy Boynton) has no love for Payton, and neither do most of his classmates.

Much of these first episodes of "The Politician" focuses on Payton's fear that he is unlovable, an insecurity tied to what he perceives as his inability to feel. Both shortcomings lead him to question his worth and motivations, and his humanity too. The fact that he's is the adopted son of one of the richest men in the country gives him little solace, since the Hobart patriarch (Bob Balaban) shows a preference for his twin sons Luther and Martin (Trey and Trevor Eason). His mother Georgina (Paltrow) showers him with affection and support as a counterweight to the rejection he faces from other family members and peers.

A person doesn't have to be a close student of Murphy's filmography to notice that "The Politician" is more or less a supermodel Frankenstein's monster of many of his past works with a smattering of Wes Anderson tossed in for good measure.

You don't reel Paltrow into a project like this without making a few nods toward "The Royal Tenenbaums" (and through its high school setting, "Rushmore").

You don't cast a Broadway star of Platt's caliber in a character that resembles "Glee's" Rachel Berry without giving him opportunities to sing a few times, his finale performance standing as one of the first season's most rousing moments.

And you don't cast a pair of Instagram famous hot twins without writing them as sociopaths, perhaps an ode to Lyle and Erik Menendez, whose story could have been the subject of Murphy's "American Crime Story" if not for the far more fascinating and layered case of O.J. Simpson.

There's some "Election," some "Popular," and a bit of "Running with Scissors" wired into "The Politicians," parts in a specific diagram that lights up marvelously when it's plugged in. Once the initial dazzle wears off, though, the viewer might become aware of the device's lack of purpose or utility.

In addition to the Andersonian touches, the creators pull in a story element that directly clones the Gypsy Rose Blanchard cast (dramatized in Hulu's "The Act") in the form of a wallflower named Infinity Jackson (Zoey Deutsch) who supposedly lives with cancer, and whose grandmother Dusty (Murphy ensemble regular Jessica Lange) has the whiff of a grifter emanating from her from the moment she first comes onscreen. To ensure we make the connection Infinity has an obsession with Disney princesses, wears child-like clothing, and has a secret dirtbag boyfriend.

Payton's team  plans to use Infinity to earn the sympathy vote, as does Payton's opponent in the election, who cagily picks as a running mate a black queer woman who, as it turns out, may be the most conniving and politically ruthless figure in the race.

This is where the message becomes perplexing, particularly if a viewer seeks to draw parallels between "The Politician" and real-world politics. It's odd that in a series with such overtly inclusive casting choices (the school's principal, for example, is a black deaf woman) that the writers would make the figures most representatives of society's disempowered the secret mustache-twirling villains of the story. It's not that these characters by default should be likable – in this series, pretty much only Paltrow's character gets a pass in that department – but there should be a reason that they're terrible people. Instead, they just are.

In a similar fashion, Payton is a boy who questions whether emotions are the enemy of ambition, a word mentioned many, many times throughout the season, and has concerns about his lack of emotion. Wrestling with conundrum locks up the energy of Platt's performance. Curiously Schlaepfer is hyper-mechanical, almost android-like as Alice, and it works – the idea is that she's the brains behind his heartlessness, strategizing social media moves and countermoves like a season's political hit woman.

Odds are "Impeachment," the upcoming third installment of Murphy's "American Crime Story," stands to provoke wider and more heated conversations related to the current dialogue surrounding national politics than "The Politician" does. Anyone seeking dramatized content of our current woes from his perspective won't find it in this season.

A Netflix subscriber might be forgiven for misunderstanding Murphy's intentions based on that title, however, just as she should be excused for assigning greater depth to the series than most of the story merits. "The Politician" is intended as an anthology, with coming seasons presumably focused on different seasons in Payton's life and political career.

Yet to be seen is whether the next season's plot validates the choices made of the course of the first. Time has a way of placing misunderstood actions in context, and generally history is kinder to well-meaning leaders who make mistakes along the way than we are as they're making them.

In the same spirit, someday "The Politician" could someday evolve into a meaningful, potent statement about the hazards and rewards of ambition and leadership, particular as those ideas are viewed by would-be officials and the electorate. Right now, however, it says a lot more about Murphy's ambition than anyone else's, real or fictional.

"The Politician" is currently streaming on Netflix.