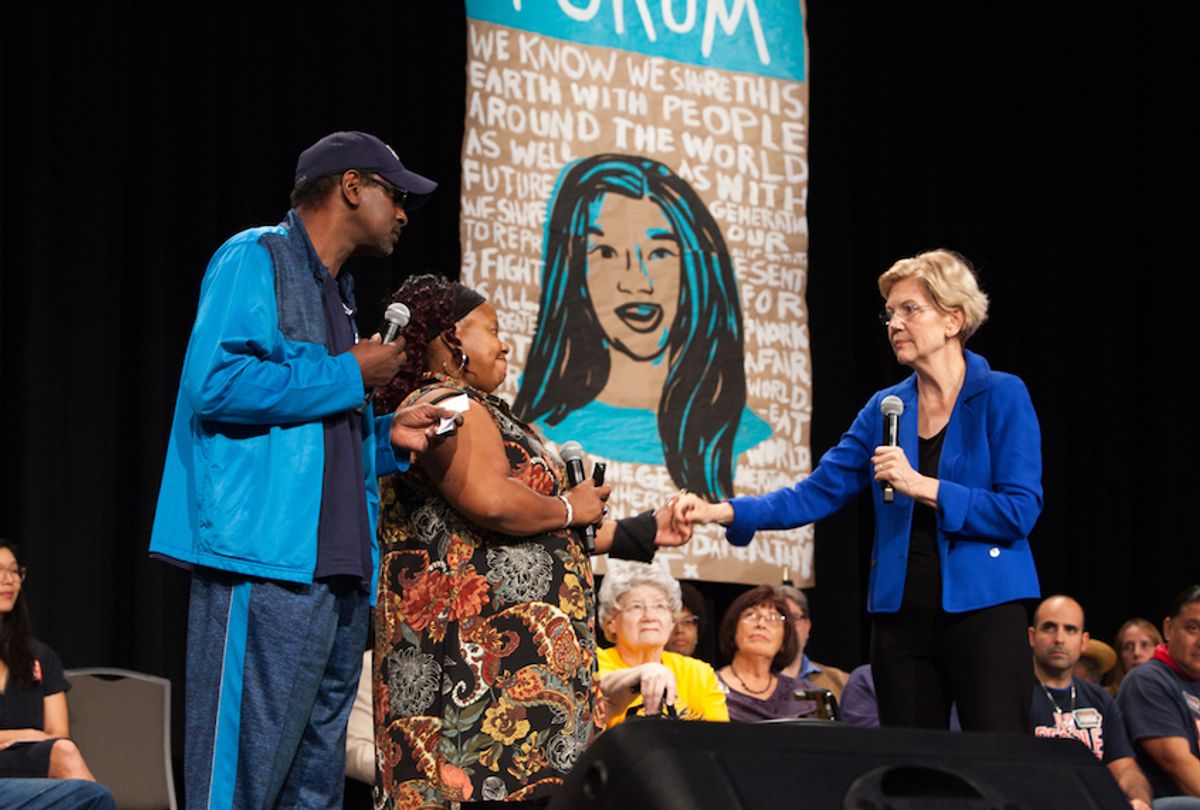 At last weekend’s The People’s Forum, Honduran farmworker and union organizer Ahrax Mayorga and Larry Ginter, a white, third-generation Iowa farmer, shared the stage, both dressed in plaid. Mayorga described the fight for workers’ rights in Honduras, saying, “until U.S. trade policy and transnational corporations respect the right to organize, the poverty and violence that we face will only increase, and these are the root causes that force us to flee.”

“When I hear stories like this, it makes me outraged,” Ginter said. “Transnational corporations continue to trample on the rights of farmers in Iowa, and the rights of farmworkers in countries like Honduras.” Both were speaking to Senator Bernie Sanders at The People’s Forum, a five-hour, political event held in Des Moines, Iowa, which provided the audience a chance to press four Democratic presidential candidates — Senator Sanders, Senator Elizabeth Warren, former HUD Secretary Julián Castro, and Mayor Pete Buttigieg — on their broad, progressive agenda, which includes everything from living wages to universal healthcare to a Green New Deal. 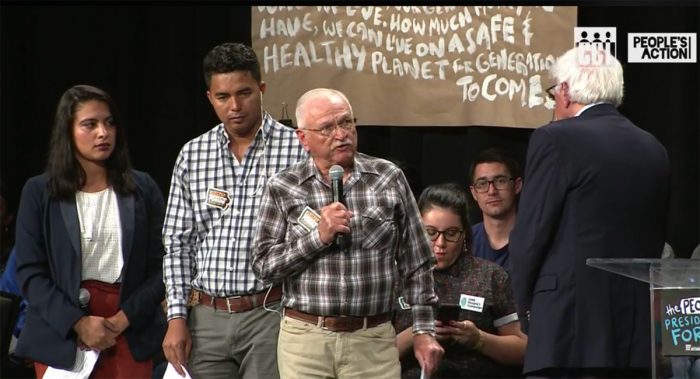 To Austin Frerick, an Iowa antitrust expert and 2018 Congressional candidate, it’s this type of organizing that illuminates a political path to food systems change. “I can’t name another agriculture and food event that has brought together [farmers and foodchain workers]. This is how we balance the power dynamic. No one else is doing that.”

Read more Civil Eats: To Prevent the Next Dust Bowl, Give Soil a Chance

Attended by 2,300 workers and organizers from Iowa and seven neighboring states, the Forum — the first of four planned by organizers People’s Action, a coalition made up of groups in 27 states — marks a resurgence in “movement politics,” a strategy born out of anti-war activism in the 1970s. The 21st-century evolution of the strategy focuses on corruption and corporate control of the political system, and mounts unabashed progressive candidates who attempt to build the type of majority that has been seen as unimaginable by establishment Democrats.

As a result, and especially in Iowa, food and farming have been front and center. For instance, the Service Employees International Union (SEIU), the nation’s largest private-sector union and leaders in the Fight for $15 campaign, which was strongly represented at the event, regularly invokes fast food chains as poster children for 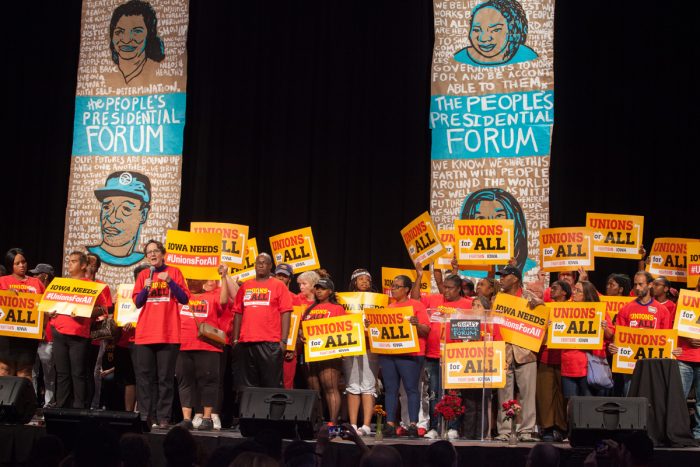 “Trump tried to put the CEO of Hardees as Secretary of Labor in this country,” Terrence Wise, a Fight for $15 organizer and one of America’s 4 million fast food workers, told Warren, while asking her how she would “make sure Black and brown workers have a seat at the table” in her administration.

In response, Warren said of her picks for Secretary of Labor and National Labor Relations Board, “we’re going to have people on the side of workers, and who believe in unions.” SEIU President Mary Kay Henry spoke briefly at the event, and described the movement’s goal as, “ending poverty-wage work in the fast food sector, and making those jobs good jobs that people can feed their families with.”

At the People’s Forum, food system workers were joined by organizers working for comprehensive family care, universal affordable housing, a humane immigration system, and debt-free education. Under this umbrella, food and agriculture are no longer seen as niche issues, but instead seamlessly integrated into a vision of government that prioritizes people and the planet.

“We the people deserve an ag system that works for us and the land and there’s no reason why we can’t have one,” Dayna Burtness, a member of Minnesota’s Land Stewardship Action and a hog farmer, told Warren. Echoing the movement politics philosophy, Warren spelled out corruption as the root cause of inaction, saying, “we know what works” for family farmers.

“Big Ag has figured out that they can keep raking billions off the farmlands of this country,” she said. “They’ve figured out that if they invest in Washington, in Senators, in people in Congress, then no one will stop them.”

Warren’s plan? “It just takes making our democracy work, and that means one determined woman backed up by millions of people across the country,” she said. Her response embodies a movement politics theory embraced explicitly by her and Bernie Sanders: individual politicians are insufficient for lasting change. 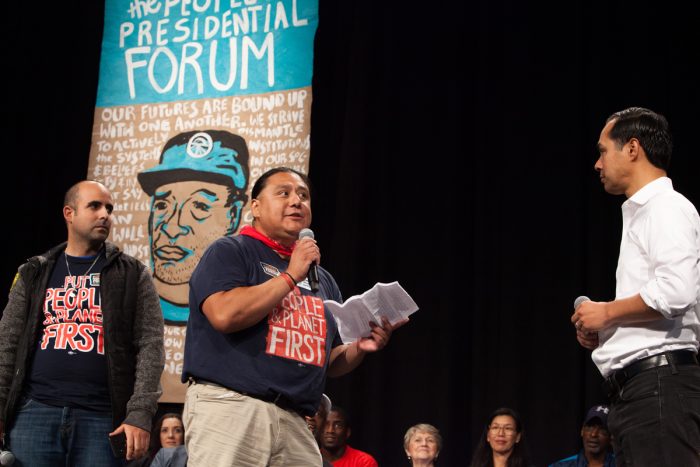 While People’s Action is becoming a high-profile champion of movement politics on the national stage, other food systems organizations are taking political routes to realize their goals. Raj Patel, author of Stuffed and Starved and The Value of Nothingand research professor at the LBJ School at University of Texas at Austin (and a member of Civil Eats’ advisory board), thinks that’s a good thing. “There is a big opportunity for this kind of organizing,” he said, noting that the rising tide of new labor coalitions is a “reason for hope.” “We need to see much more of it,” he added.

In rural places like Iowa, uniting a largely white rural farming cohort and a largely Latinx factory workforce requires difficult organizing around culture barriers, but it remains an opportunity for Democrats. “The ideal coalition are all the hog factory workers together with the farmers, confronting the Smithfields of Iowa,” says Austin Frerick.

Recent reporting from Wisconsin by the New Yorker profiled rural voters of varying persuasions and featured Bill Hogseth, the chair of Dunn County Democrats employed by the Wisconsin Farmers Union, who asked, “Was the flip to Trump about Trump? Or was it the lack of organizing? Or the lack of people willing to work for that campaign?” To Hogseth, the narrow election margins and voliatility of his critical state highlights the need to “focus on values, not partisanship.”

Read more Civil Eats: Can Big Ag Be Part of the Climate Solution?

Mark Schultz, the Executive Director at Land Stewardship Action Fund in Minnesota, wasn’t at the People’s Action Forum with his colleagues. Instead, he was at Farm Aid, where he said that a populist convening called “Forward From Here” further validated that “progressive, anti-corruption platforms and campaigns, fueled by organized grassroots bases of people and new political alliances, are gaining ground around the country.”

The trend is in part spurred by rural family farm-focused organizations that are active in legislative battles and provide organizing tools and resources, but are also slowly beginning to directly engage in lifting home-grown candidates into leadership roles. Land Stewardship Action launched an action fund less than two years ago to “engage more deeply with candidates for political office and influence the election environment.” Iowa Citizens for Community Improvement (CCI), the most powerful and expansive progressive organization in Iowa, did the same less than a decade ago.

Frank James, staff director at Dakota Rural Action, sees “opportunity for progressive candidates” in South Dakota, pointing to the successful anti-corruption message of Billie Sutton, the 2018 Democratic gubernatorial candidate who came within three points of becoming the state’s first Democratic governor since 1974. “We are active in building grassroots leadership,” James told Civil Eats. “That leadership and talent also helps people who want to serve in other public means.” 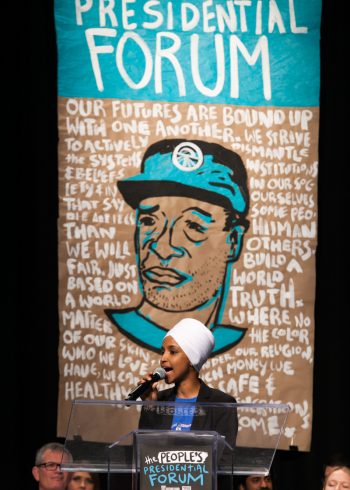 Western Organization of Resource Councils (WORC), a regional political organization of which Dakota Rural Action is a member, works with nonprofit member organizations in seven Western states to focus on educating voters and grooming leaders for all types of office. When it has run up against the legal limitations of traditional nonprofits, it has worked to establish formal political organizations in Montana, North Dakota, South Dakota, and Colorado, with year-round groups focused on the Native American vote in Montana and North Dakota.

Even in Texas, a Democratic candidate for Texas’ 10th Congressional district, Mike Siegel, is employing movement politics strategies. A recent campaign video focuses on a pecan farmer whose health and livelihood were ruined by a coal plant, pledging to stand up for the health of people and the planet. “I believe organizing is the way we make political change,” Siegel says in the video. “If we say we need healthcare, housing, clean air, and clean water, it’s important for all of us to fight back, because our corrupt political system won’t change unless we force it to.”

Siegel recently spoke on a panel alongside academics, union leaders, local politicians, environmental activists, and others about the need for a Green New Deal.

Far from Texas, the Hawai’i Alliance for Progressive Action (HAPA) organized a multi-ethnic coalition to fight widespread testing of agricultural chemicals that they believed was making people sick. After a series of class-action lawsuit victories and a landmark pesticide regulation bill, the organization established the Kuleana Academy to train leaders to run for local office. As Maui Council member Alika Atay put it recently while speaking on a panel in California: “If we are not ‘at the table,’ then we will continue to be ‘on their menu.’”

The HEAL Food Alliance, a group of 55 multi-sector organizations focused on health, environment, agriculture, and labor, recently established a School of Political Leadership to equip 10 enrollees each year with “the tools, knowledge, and skills they need to run for office, work on campaigns, and drive political change,” in keeping with the organization’s theory of change: “We will work to support practical community/regional work, to influence and run political candidates, and to transform corporate structures.”

HEAL’s director, Navina Khanna, was present at The People’s Forum in Des Moines and delivered a speech during a panel session that connected the devastation during the Green Revolution in the Punjab region, where she is from, to rural exodus in Iowa, decrying the limited rights of food workers worldwide.

“Even the people who want to do better, can’t—because this whole system is rigged,” said Khanna. “And we know that whoever controls our food and our land, seeds, water, labor, that’s who controls our lives. It’s up to us, in this moment now, to step into something bigger than that . . . to create something more beautiful than any of us ever thought was possible.”