Lane Evans showed America how to be a hero in Congress

The 12-term progressive House Rep. from Illinois always had the guts to vote his conscience. 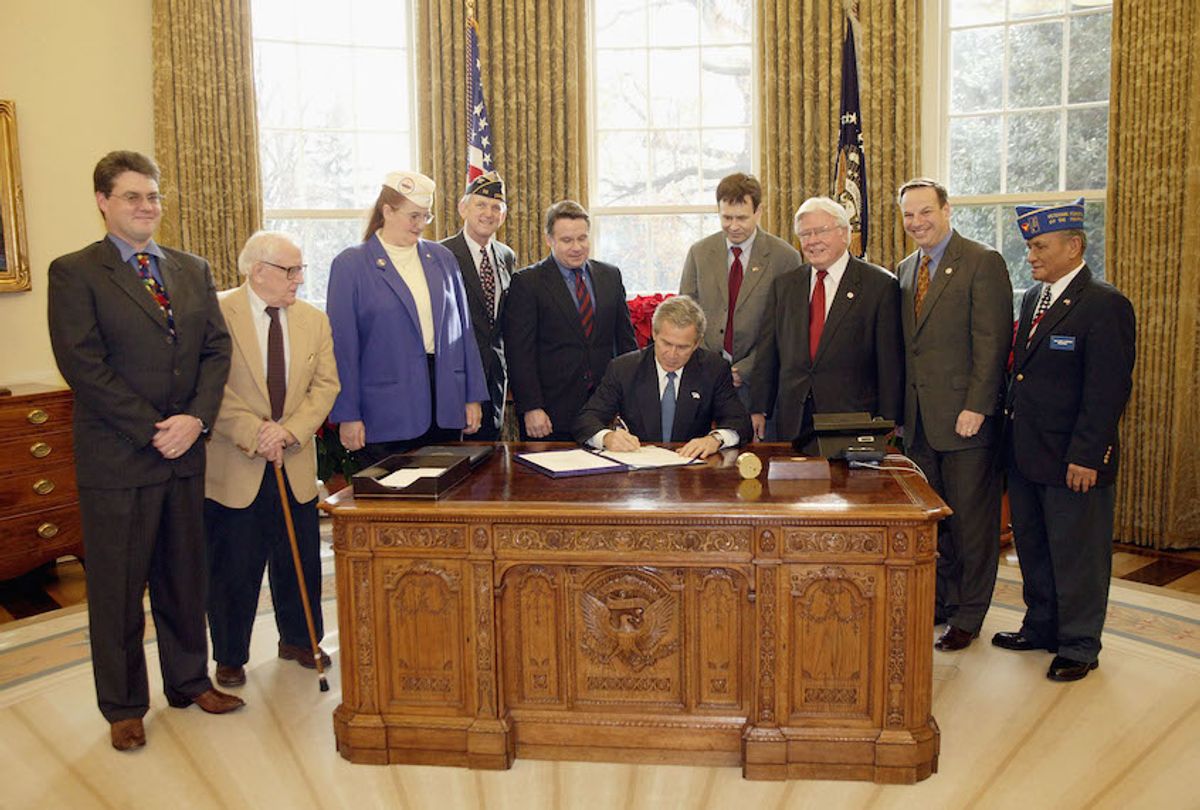 This article was produced by the Independent Media Institute. It is an excerpt adapted from the new book "Guts: The Lane Evans Story," by Devin Hansen, published by Strong Arm Press, September 13, 2019.

Editor’s Note: Lane Evans was arguably one of the most progressive members of the U.S. Congress during his 12-term tenure representing the 17th District of Illinois (currently held by Rep. Cheri Bustos). He was the first politician to endorse Obama for the U.S. Senate and was the mastermind behind the Montgomery GI Bill and the Agent Orange Act. Lane returned 10 percent of his salary each year and declined nearly all pay raises.

Lane’s career epitomizes someone who had the guts to vote their conscience rather than what was politically expedient. Lane died nearly penniless in 2014 due to complications brought on by Parkinson’s disease, but not before he showed all of us what civic duty should look like.

December 2008: The place was called the Lighthouse, a replica of which served as the entrance. It was a relatively new building flanked by subdivisions and storage units rather than coastline and ocean, with three stories of single-unit apartments for seniors and the disabled.

I waited while the receptionist called Lane’s room. In one hand was my briefcase and the other a poinsettia; a red one with foil around the pot. It was a thank-you gift for his main caretaker Cher Erickson. She was appointed as one of his guardians in 2007, along with Lane’s former driver Mike Malmstrom. They were his first and last line of defense, there to stave off the con artists and the beggars, the ex-lovers and groupies driven by greed or morbid curiosity.

I chewed three mints while waiting for her — more out of nerves than because of her tardiness. Soon she appeared in the lobby. We met with a smile and handshake.

She asked about my background, my family, and how I first met Lane. It was like a job interview except there would be no salary. The congressman was broke, she told me. He barely had enough money to pay for his rent and medical care. He’d been too generous over the years and his pension was miniscule.

His near-poverty was the first surprise of many.

“Is there anything I shouldn’ttalk to him about?”

“His mother. He doesn’t like talking about his mother. That brings him down.”

“OK. But, I will have to ask him about the Parkinson’s. You know, like where he could be…”

“That’s OK, you can talk about that.”

A level of trust now between us, we took the elevator to the second floor. His apartment was at the end of a series of hallways. They were wide and clean and smelled like Christmas. Lane’s door had a small stone set in the front etched with the Marine Corps logo.

“Just to let you know, he just woke up and hasn’t showered yet,” Cher said, turning the knob.

I took a step back.

I followed her inside through a small kitchenette and into the living area. Everything was painted white. Several plaques and awards decorated the walls. Lane was dressed in a mismatched sweat-suit, hunched on the couch and slowly swaying like a pianist.

Cher turned off the TV and I sat on the edge of the recliner.

“You remember Devin,” Cher said. “He brought us this flower.”

She set the poinsettia on the kitchen counter, next to three others just like it.

“It’s just a small thanks for letting me meet with you, sir.”

Lane mumbled something in reply. His eyes were still groggy and the right side of his hair was pushed up.

I told him my plans for the book about himand how I wanted to meet with him once a week. Lane replied in a mumbled whisper, which Cher had to translate: “Sounds good so far.”

His mouth was anchored by the disease, often resulting in incoherent mumbling. All around the apartment, there were signs pronouncing: “Speak LOUD!”

I became aware of my own volume: “Do I have to be talking this loud? Can you hear OK, sir?”

“Yes, he hears OK. It kind of aggravates him when people think they have to shout,” Cher said.

I apologized. Then we talked about the weather, the sleet falling outside, and other nonsense until I caught onto his speech pattern. It was a dry whisper with no enunciation. His lips were heavy, almost still. But soon with a little practice, I could understand nearly every word.

Cher excused herself to the kitchen and sorted through his bevy of pills for the afternoon regimen. I just had time for one solid question — it had to be good:

Lane was silent, staring at the floor. I waited, unsure if it was because the question was stupid or if he was enduring one of his frequent hallucinations that Cher had told me about.

A minute passed and I asked again: “What makes a person great?”

His mouth opened but no words came out. Then he turned his head up and looked at me, clearly wanting to answer.

I looked at him directly in the eyes: “What does it mean to be human?”

“That-does-not-compute,” he said in a robotic voice.

I laughed. He still had the wit. It wasn’t quite as quick, but it was the same dry, nerdy humor he had had back when he was healthy.

“Sorry — I’m just trying to find out what quality you admire the most in people.”

This time something in his mind clicked: “Guts. I like guts. Be willing to stand up. To take a punch.”

Cher returned with his pills. After that, it would be time for his physical therapy. So I held out my hand to say goodbye. He didn’t reach for it. Instead he rocked back and forth on the sofa to gain momentum as Cher came over and grabbed him by the hands. One, two, three and he was up on his feet. His knees shook as he gained his balance.

He took a step toward me and we shook hands purposefully.

Down the elevator and through the lobby, I swallowed a few tears.

The quality he most admired and most embodied. He had it in the Marines. He had it in Congress. And he had it during his final years moving from rest home to rest home, enduring the painful tremors of Parkinson’s and time-bending hallucinations of Lewy body dementia. His only connection to the world was through a giant television that was endlessly blaring. And for a man with a genius-level IQ and a hyper-appetite for books, it was perhaps a fate worse than purgatory.

But there he waited.

He would never admit this. Because if there’s one thing that Lane Evans embodied even more, it was humility. And that combination of bravery and humbleness is what made him so successful in Congress. His modesty was endearing to his constituents and elicited a sense of trust among his Democratic and Republican colleagues.

He never pandered to voters and voted his conscience even if it wasn’t politically expedient. If staffers would try to change his position on an issue merely for political gain, Lane would say: “People believe a believer.” It was one of his favorite mantras.

“People can sniff out bullshit,” he would say. “They can sniff out opportunistic politicians. People know that I believe in what I say and what I am doing.”

Even something as simple as a haircut represented so much more. He had a boyish, unkempt bowl cut that he kept for years after its expiration. When friends and strategists would tell him to cut it, he’d say: “I’m not going to change my hair because if I do then I’ll start changing other things.”

And after 24 years in Washington, Lane never changed.

He stayed true to himself and his roots in Rock Island, Illinois, the rust-belt hometown that shaped him, educated him, and cemented his political views. Lane was always a Rock Islander — he just happened to spend a couple of decades visiting D.C.

In a perfect world, Lane would be writing his own story, and much more eloquently I’m sure. But this is how fate worked out. I’m writing for a dead man who’s still alive. A man who can barely speak or write. A nowhere man.

This is Lane Evans. As I know him.

Devin Hansen is a former journalist and author of two books, including "Guts" (Strong Arm Press, 2019) and "Sponsored By…" from the Midwest Writing Center. Devin studied writing at Illinois State University. His fiction has appeared in several small press magazines, and he has had two plays professionally produced. His personal blog is inhumanimal.com.