Now Betsy DeVos is telling colleges what to teach 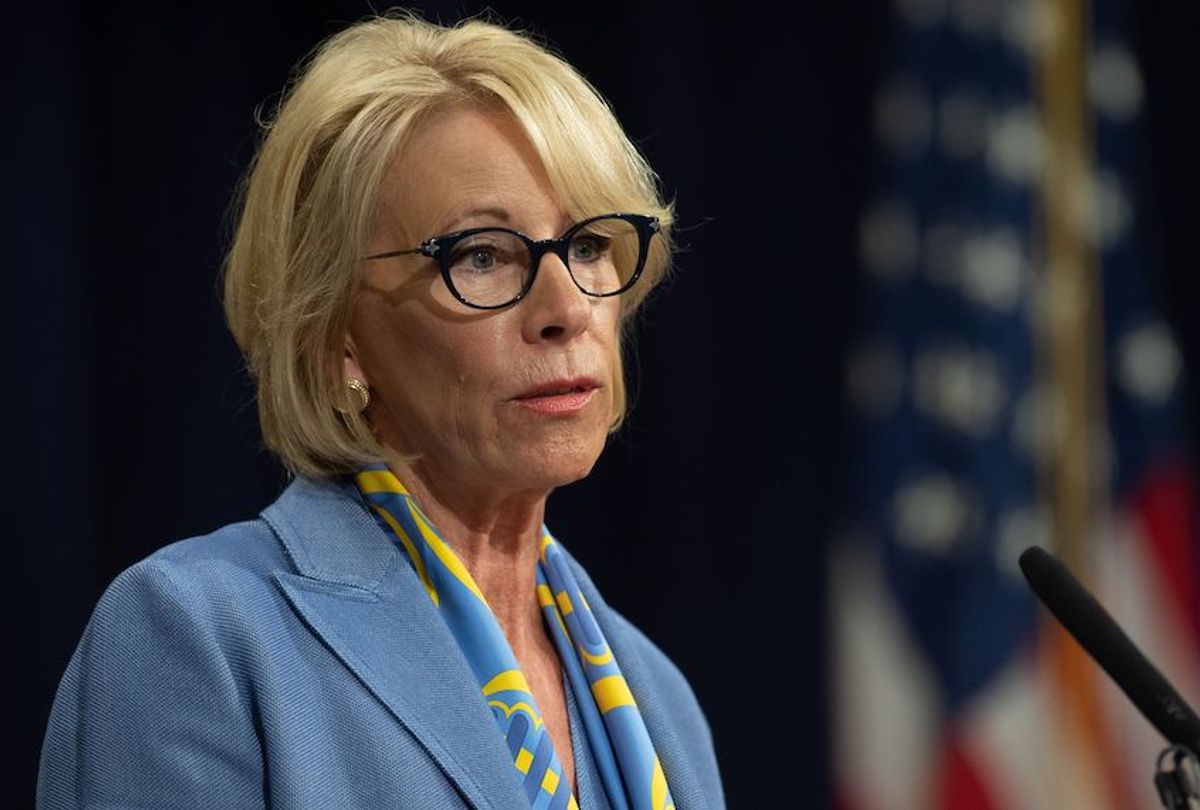 US Secretary of Education Betsy DeVos speaks during the Summit on Combating Anti-Semitism at the Department of Justice in Washington, DC, July 15, 2019. (Saul Loeb/AFP/Getty Images)
--

I’m delighted to learn that everything must be fine with America’s public schools, with student loans and debts, with the growth of community colleges, with affirmative action in our school communities, with a healthy diversity, school assaults and shootings, fair pay, teacher satisfaction and childcare issues.

I know this because otherwise, I would have no explanation for why Education Secretary Betsy DeVos would have time to interfere with the content of college abroad classes.

Last week, Education ordered Duke University and the University of North Carolina at Chapel Hill to remake the Middle East studies program, run jointly, because it isn’t offering a positive-enough image of Judaism and Christianity in that part of the world.

That’s right. The department is dictating what two colleges teaching students abroad in the middle of Arab countries and culture are serving up as part of a college recruitment course aimed at encouraging the region’s Muslim high school population to attend college.

This came to light in a  letter to the universities published last week in the Federal Register. Robert King, assistant secretary for postsecondary education, said the course did not present enough “positive” imagery of Judaism and Christianity. The New York Times, which described the entry into the content of a college course “rare,” indicated that the letter followed an inquiry into the Middle East program, asserting that it violated the standards of a federally supported program in international studies and foreign language programs.

DeVos’ department has become increasingly aggressive in going after perceived anti-Israel bias in higher education. The department’s civil rights head, Kenneth L. Marcus, has made pro-Israel advocacy a focus of his departmental work, leading efforts to delegitimize and defund Middle East studies programs that he has criticized as rife with anti-Israel bias.

The education department said that the North Carolina program is offering elementary and secondary school students “a considerable emphasis placed on the understanding the positive aspects of Islam, while there is an absolute absence of any similar focus on the positive aspects of Christianity, Judaism or any other religion or belief system in the Middle East.” Too few of the Duke-U.N.C. programs focused on “the historic discrimination faced by, and current circumstances of, religious minorities in the Middle East, including Christians, Jews, Baha’is, Yazidis, Kurds, Druze and others,” the department said.

Now in pursuit of distance learning to be offered by American colleges, you might think that Education would be concerned with protecting the independence of educators in areas like the Middle East, as opposed to dropping the hammer on a particular religious outlook. Secondly, if the department wanted to build American influence abroad, it might recognize what is involved in being a good guest in someone else’s country.

Of course, Education thinks it has a say in what is taught because it has offered federal grants to these institutions.

Education has involved itself in lots of campus discussions about boycotts and other political criticisms for renewed Israeli muscularity in taking Arab lands in the West Bank and other occupied territories.

The letter sent to the universities – who declined to comment – basically asserted that Title VI monies meant that foreign language instruction and area studies should be reflecting an American or western lean. In the letter, King criticized a conference focused on “love and desire in modern Iran” and another focused on Middle East film criticism, “programming that “appears to lack balance.” The department also criticized teacher training programs for focusing on issues like “unconscious bias, serving L.G.B.T.I.Q. youth in schools, culture and the media, diverse books for the classroom and more.” It said it had a “startling lack of focus on geography, geopolitical issues, history and language.” DeVos ordered an investigation into how a course offering on “Conflict Over Gaza: People, Politics and Possibilities” fits within the federal funding guidelines.

Education gave only days for the change to kick in before funding renewals are due.

How about the government either decide to support colleges, and leave the teaching to those whose job it is.