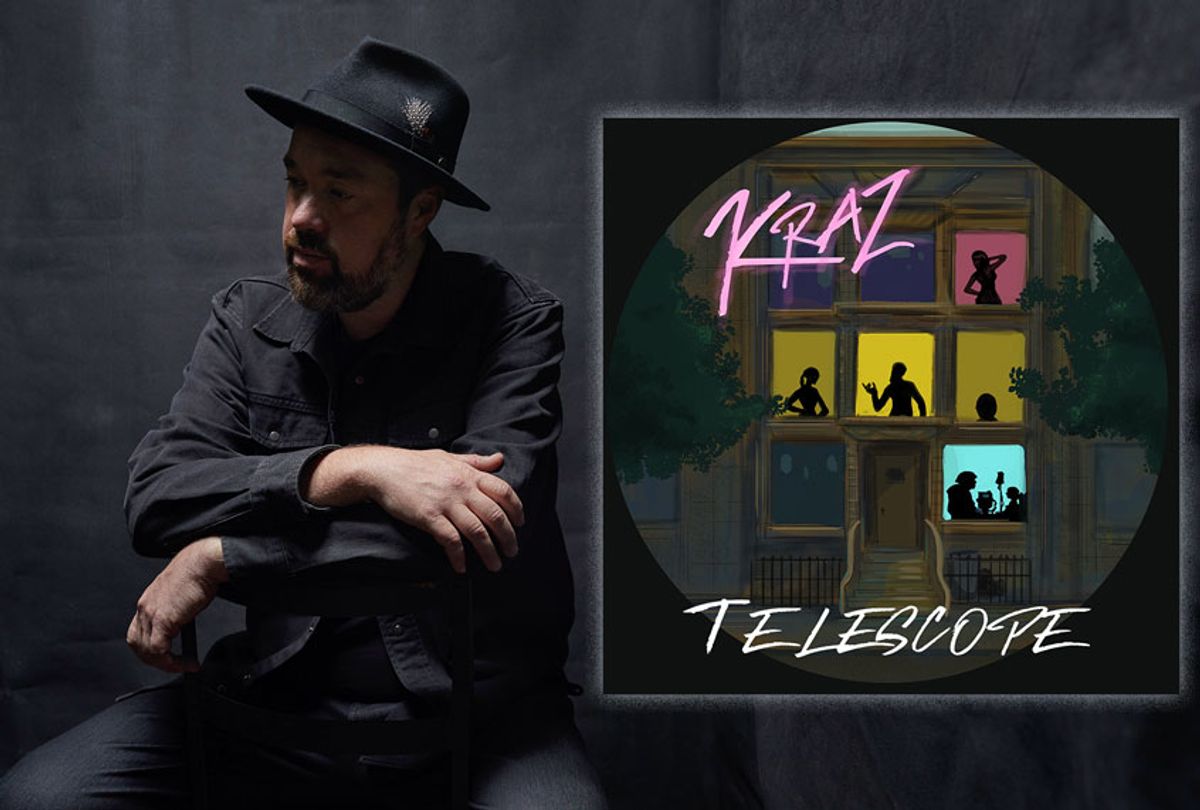 Eric Krasno, aka Kraz and his new album "Telescope" (Photos provided by publicist)
--

The disposability of music is one of the most lamentable developments of the digital age. As music has become instantly accessible, and streaming has grown to dominate consumption, records no longer have the life altering power they once possessed. Records themselves are almost anachronistic to many young listeners, more accustomed to the arbitrary shuffle than the curated sequence of songs. Eric Krasno, the songwriter, producer, and virtuoso guitarist who has created and collaborated on music in nearly every popular genre — his resume boasts of projects with the Grateful Dead and 50 Cent — is waging his own quiet (but not too quiet) war against the trend of musical devaluation.

“Telescope,” the record Kraso has released under his nickname Kraz, is a collection of songs enjoyable on their own individual basis, but best as a cohesive unit of musical storytelling. It is a concept album chronicling the lives of four characters living in a Brooklyn brownstone.

Gina, a young partier with ambitions to become a model, is lonely as she tries to free herself out of the unforgiving tentacles of New York. Seeing her shot at stardom fading with the dawn, she finds solace in the arms of Nick, whose marriage to Charlotte is crumbling as they struggle to raise their daughter, and he suffers the stagnation of his own artistic aspiration. His moderately successful rock band has run into a commercial wall. The owner of the building, Ramon, inherited the property from his mother, but his financial fortune does not mean he is without problems. Recently released from prison, he no longer recognizes his neighborhood; unable to assimilate into the realities of gentrification, he too feels the isolation of toiling in a metropolis without friends or allies.

Krasno, who is originally from Brooklyn, said, “I did not want to write from my perspective for the record,” when I interviewed him over the phone about “Telescope.” Cowriting with a wide variety of bands and artists, from Tedeschi Trucks to Norah Jones, has given him the ability to “get inside other people’s heads, musically,” and he had the desire and design to transfer that skill into his own music.

“I lived in a Brooklyn brownstone for 15 years,” Krasno said. “And I watched the people around me change, but also the neighborhood change. So, I started thinking about how I could tell that story. Most of the songs, believe it or not, came in the order they are on the record.”

Coinciding with the aim to write songs in the voices of different characters was an urge to “follow a sonic path,” Krasno said. “I wanted to combine different sounds.”

An obvious assumption about a concept record, especially when it bears the name of a highly acclaimed rock guitarist, is that it will advance its story through lyric-driven rock and roll or folk music. One of the surprises of “Telescope” is that its sonic path leads listeners into a loop and hip hop influenced night club — a more downbeat and mellow version of the music that fills the air of Gina’s nights.

Krasno explained that he is releasing the record under “Kraz” to create separation between “Telescope” and his previous projects. “I wanted to rebrand the sound, and do something that wasn’t expected of me,” Krasno said. “Most of the band things I’ve done have had a throwback sound, and I love that, but I also love the new production techniques and some of the new innovations we hear right now.”

The use of guitar is one of the most powerful elements of the sound Krasno has created. There are dynamic, rock and roll guitar solos and fills integrated into the contemporary club sound that not only provide the record with musical color and texture, but add to the range of emotions the story is able to explore and express.

The lead single, “Leave a Little,” has a pulsating quality that manages to sound like the anxiety one might imagine troubling Gina, whereas “Carry My Name,” the song introducing Ramon, features interplay between modern synth loops and blues guitar, communicating a timeliness of struggle for belonging and justice through the means of modern technology.

“All At Once,” the album closer depicting the dissolution of Nick and Charlotte’s marriage, sounds like a breakup soundtrack with plaintive acoustic guitar, but seemingly dripping out of the foundation are digital enhancements both melancholy and oddly hopeful.

It is unnecessary to follow the story line by line to derive pleasure from the music of “Telescope,” but Krasno is doing what he can to encourage an attentiveness rare in current music culture. “I was the guy who sat down with the record in my hand, studying the lyrics, as I listened,” he remembered. “This isn’t a musical. Someone can pull out one song, and enjoy it. I wanted to keep it abstract, but for those who want to dig deeper, the concept is there.”

“Telescope” enhances its story’s reach with animated music videos, social media promotion of teasers similar to a television series, and a website with textual explanations of the characters and the plot shifts in each song.

The sociopolitical aspect of the story — gentrification — functions as an effective background, a mosaic of observation Krasno has installed into his music. “I saw my old neighborhood become completely unrecognizable,” he recalled, “And some of that was good — healthier food options, for example — but there was a dark side, people whose livelihoods were good, people themselves who were gone.”

Krasno plans to take “Telescope” on the road for an innovative live representation of the record, and he is already writing songs for a sequel to the story that will take place in a separate Brooklyn brownstone.

As with most songwriters, he developed his new album through an organic process of creative exploration. It is not the product of painstaking strategy or planning. “I followed the muse more than anything,” Krasno said. The muse might have led him to a template on how sustained storytelling through music — the troubadour tradition — can survive in a culture suffering from fragmentation and frivolity.