Salon talks to the co-director of the dark comedy "Swiss Army Man" about his new movie, also featuring a corpse 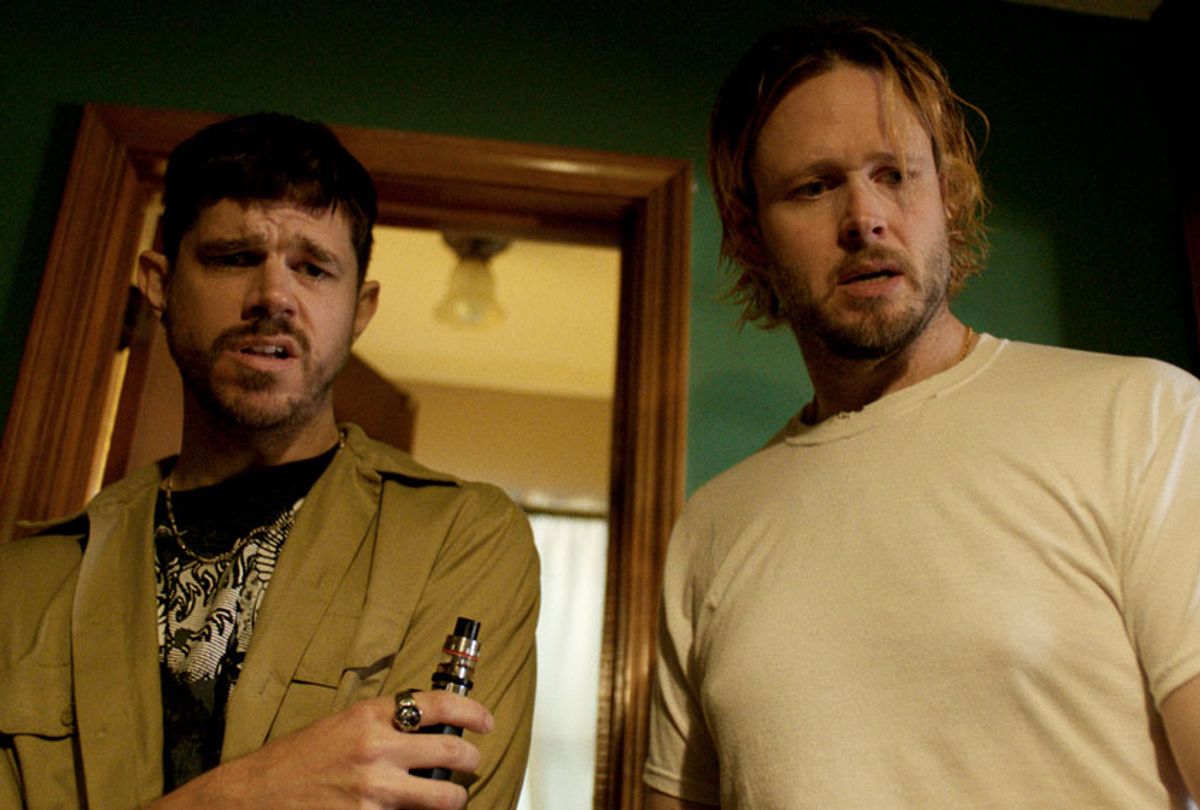 Still from "The Death of Dick Long" (Ashley Connor)
--

Daniel Scheinert, who under the moniker “Daniels,” co-directed the cult hit “Swiss Army Man,” has gone solo for his latest project, “The Death of Dick Long.” This nifty offbeat comic crime film, set in Alabama, has two friends, Zeke (Michael Abbott, Jr.) and Earl (Andre Hyland), trying to cover up the death of their buddy Dick Long (Scheinert).

While the cause of death is revealed over the course of the film, it befuddles Sheriff Spencer (Janelle Cochrane) and Officer Dudley (Sarah Baker) who pull the case. As Zeke tries to cover his tracks, he makes a series of increasingly bad decisions. His wife Lydia (Virginia Newcomb) soon realizes something hinky is going on and tries to get to the truth. Meanwhile, Earl is planning to skip town, not wanting to be found—or found out.

“The Death of Dick Long” is clever, not just in its plotting, but also in how it creates tremendous sympathy for Zeke even after the truth of Dick’s death comes out. (Abbott gives a truly remarkable performance). Scheinert deftly balances the humor, the tension, and the weirdness as the story unfolds.

The filmmaker spoke with Salon about his interest in corpses, intensely personal secrets, and “The Death of Dick Long.”

It seems you have a penchant for movies about misadventures with corpses. Dare I ask what’s up with that? I’m honestly afraid of your answer.

[Laughs.] I have a couple answers. I was wondering why I have such a morbid sense of humor. I’m scared to share every movie I make with my family. But my aunt Vicki collects funny obits, and my family thinks that’s dinner conversation, so gallows humor is part of my upbringing.

The funny thing I’ve learned about making a film with a corpse is that it is about mortality and how bodies are weird.

Can you talk about playing the corpse and the physicality of that role in this film? I’m guessing you’re not a method actor here.

Definitely not method. That would have made directing and acting hard! I laid on the ground between takes. The first scene I was half naked on the table holding my breath and then I had to give [actor] Roy Wood Jr., notes. Do you want to know why I cast myself?

Why did you cast yourself?

We asked Justin Timberlake and his team said we are not passing this script along. After we asked a few people Billy Chew, who wrote the film, said, “You should play Dick Long!” We were deep into prep, and I was nervous that people in this town would think I’m making fun of them. It's nerve-wracking to meet sweet people and not tell them this is a f**ked-up movie. So, it was cathartic for me to play that embarrassing role. It’s about introspection. But my mom was not happy I cast myself in this role.

What I love about the film is that it traverses that moral quicksand where you probably shouldn’t tell your loved one(s) that you’ve done something wrong. Something that will change the way they think about you. I’m hoping you’ve not been in that situation—though please tell me if you have! Where do your thoughts lie with confessing a painful truth to a loved one?

I think keeping secrets is—for people who aren’t sociopaths—so hard and painful. And having secrets kept from you—where a loved one is scared to tell you something and finally tells you—it can make you rethink your history together. The specifics of this movie are unrelatable for 99% of people but what we’re getting at is a super-relatable feeling—like being an imposter in a relationship and not feeling you can share. Sharing is important, but the movie is about how scary and f**king painful it can be to expose those corners of yourself. It is not a self-help story about telling your significant other your secrets.

Do you have any secrets you want to share?

Off the record I could. I don’t want you to share it readers.

[Scheinert does confess something intensely personal off the record that should not be disclosed. Wow.]

Zeke comes across as surprisingly sympathetic in the film, especially when he has to come to terms with what transpired. Can you talk about how you and Michael Abbott Jr. created a character who made bad decisions, and doesn’t think things through, but we root for anyway?

I am so happy with Mike’s performance. It’s the goal of the film to take you on an empathy rollercoaster. You start laughing at rednecks—you fall in love with them, then fall out of love hard, and then, by the end, you are scared to find him so super relatable. It’s tough for an actor to take those risks—to be relatable and unrelatable, depending on where you are in the film. It’s totally believable that he loves [the band] Nickelback. He’s so willing to be vulnerable in a way that big macho actors are. That’s what draws you to him. And this music repressed men love is so not repressed. It’s discordant!

What observations do you have about how masculinity is depicted in the film? There is certainly a suggestion that Zeke and Earl are hillbilly types who don’t have too many smarts between them, but the buddy-buddy nature of their relationship is interesting and while the film plays with stereotypes, it also transcends them.

I hope so. It’s so easy to dismiss trailer park-living folks and it was fun to dig in to these characters, their friendship, and their love for each other. We had some fun, but also injected close masculine-loving stories into them. My editor connected with their relationship so much.

I appreciate that you withhold what happened to Dick until the midpoint of the film and you crosscut the information, so we see not only how Zeke handles his “confession,” but also how the police take in the information. Can you talk about your delicate approach to the sensitive material?

I think one of the most impressive things about Billy’s screenplay is the masterful way he doled out info. He kept tweaking that—what you find out where, and tonally how that should feel. That midpoint, I knew was what would make or break the film. We didn’t rehearse it much because I love capturing that first take on camera. But it was nerve-wracking. I was euphoric at the reaction shot—I knew the movie would work then. That was a lynchpin in the edit room, too. We wanted to make it fun but not take the weight away from that.

Is now a good time to ask if you’ve ever had to cover up a crime, bluff till your asshole blows out, or had an unplanned encounter with the police?

[Laughs.] Yeah, I’ve never had to do the specific thing these characters did but I did come up with my real life relatable version with Billy, Mike, and Virginia and what the hyperbolic story of the film meant to each of them. It was a scary therapy session. So many families have an open secret like that—not like this secret—but they live with something that turns their family upside down.

Can you describe an evening you had, where you got weird, or consumed too much beer, and things got carried away?

Yes, I’ve gotten too weird. I’m not a crazy drinker, but if I get hyper, that’s worse than booze. I’ve been with friends and I get hyper and I want to go streaking or light something on fire. As a kid, my friends and I would get in trouble for accidently lighting things on fire. It’s like a backwoods hyperbole of me and my friends shooting our version of “Jackass,” called “Smart One.” We’d make plumbing-fluid bombs and throw them out the window. That was fun. [Scheinerts provides the recipe.]

There’s a line in the end of the film about people being inscrutable on the inside. Do you have thoughts on what “The Death of Dick Long” says about the human condition?

Yeah, I think people really are inscrutable on the inside. I don’t think it’s a fool’s errand to really try to express and explain yourself to your loved ones, but some bleak mornings, I do wake up and think it’s all a farce. My personality is a character that I’m putting on. If I see a movie that is unapologetically bleak about the knowability of a person, then I feel less alone. When films show that one thing that happened as a kid influenced a person’s whole life—that’s unrelatable to me. You don’t have to create an air of mystery, there just is an air of mystery to the self. That’s my existential hot take.