The "Transparent Musicale Finale" is a fitting eulogy for a wacky, messy series

The musical goodbye captures the awkwardness of grieving an unfortunate death 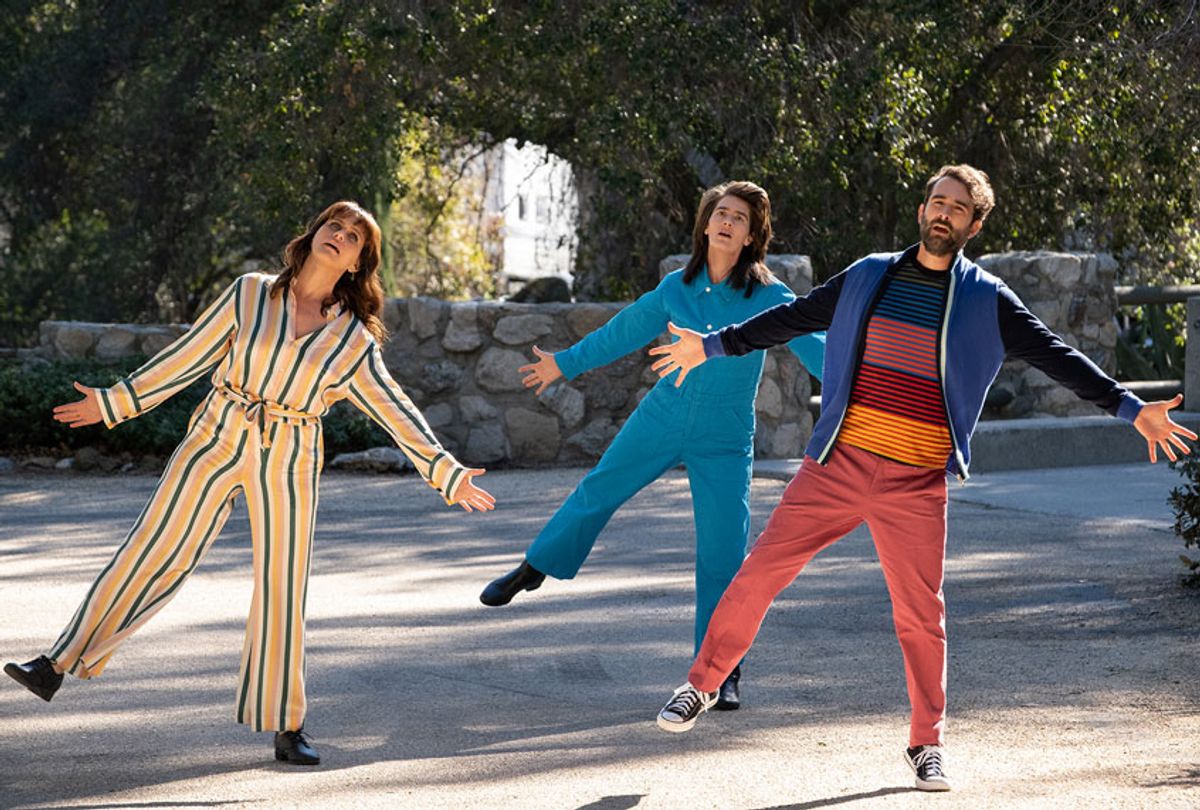 Sometimes the best tool to help us move on from tragedy is song.  That’s why there are so many ditties penned to voice the heart’s reaction to dark moments – break-up anthems, funeral hymns, power ballads, Broadway standards.

The “Transparent” swan song, its “Musicale Finale” episode, incorporates a smidge of each kind of farewell tune in its songbook. This show being what it is, and the Pfeffermans being the kind of people they are, creator Jill Soloway renders those influences much in the way the family’s overbearing, clingy matriarch Shelly Pfefferman (Judith Light) would have understood them.

That is to say, each over-the-top Broadway-style banger feels earnest, awkward, clumsy, and a tad self-serving. Among the highlights is Shelly’s big number “Your Boundary Is My Trigger": In it, back-up dancer versions of her kids wear adult-sized onesies and kick around in bunny slippers as Shelly, sporting a dowdy bra over an oatmeal leotard sings about stretching out her vagina — actual lyric — to stuff her emotionally distant adult children back inside of her womb.

Remember "To Shell and Back," Shelly's classic one-woman show performed on a family cruise, the centerpiece of the show's indelible third season closer? If you watched the snippets of Light performing her character's work, then thought to yourself that you'd pay to see this entire play, this song might make you reconsider that wish. It's ... a bit much.

This entire musicale is a lot, actually.

Other moments, meanwhile, are as well-meaning and sweet as episodes from previous seasons, with Ali, who now goes by Ari (Gaby Hoffmann) and identifies as non-binary, Sarah (Amy Landecker), and Josh (Jay Duplass), contend with the sudden off-screen death of their Moppa, news passed along to them by Maura’s confidante Davina (Alexandra Billings).

Maura may have died unexpectedly in the storyline but anybody keeping up with the news knows her cause of death is anything but natural. Whenever or however “Transparent” would have ended, it’s doubtful that Maura’s death would have been originally part of the plot of a series that has so passionately emphasized the vital importance of not merely living in one’s truth but living, period.

Then in late 2017 “Transparent” co-star Trace Lysette and Van Barnes went public with harassment claims against the comedy’s star Jeffrey Tambor and, well… let’s just say that it’s no accident that a recurring motif in the finale is the notion that one must run from their father’s house in order to have a blessed life. This is a story about cutting ties with the past and moving on to a new and better future, set to a soundtrack that, at points, is insistently campy and intentionally flirts with the boundaries of good taste.

The “Musicale Finale” is Soloway’s and their sister Faith’s means of realizing a long-gestating desire to make a musical about their family’s unconventional story while resolving the very public conundrum of how to “remove the problem and let the show go on,” as Lysette proposed to Amazon in 2017.

Lysette included this plea at the end of the public statement in which she reveals the details of her claim in order to back up misconduct allegations made by Tambor’s former assistant Van Barnes.

At the time, Amazon was already reeling from publicly firing former studio head Roy Price following claims of sexual harassment; obviously Lysette knew that coming forward effectively sealed Tambor’s fate.  As for the show’s future, in the immediate wake of the fallout from the allegations and Tambor’s firing in February 2018, that was anyone’s guess.

This situation also placed Soloway in a different bind than that faced by networks or creators of other shows featuring embattled or disgraced stars who happen to be intimately tied to the series in question. Two of the eight Emmys the show has won are for Tambor’s work, but “Transparent” is inspired by Soloway’s experience as an adult child of a parent who transitioned.

And while Soloway and Tambor were frequently knocked for casting a cisgender male actor as a trans woman, the “Transparent” creator is a vocal champion of LGBTQ inclusion, and even rarer, one with sizable power. Tambor’s misconduct and subsequent firing from “Transparent” placed a permanent black mark on a creatively vital series that really doesn’t deserve it.

And yet “Transparent” began to feel like it was running out of steam after an unwieldy fourth season that confused viewers as often as it inspired.

What were the Soloways to do? Kill the character without burying the show, apparently, singing the praises of all Maura and the groundbreaking “Transparent” accomplished throughout its four seasons in under two hours.

The “Musicale Finale” is one long eulogy for the series and for Maura, entirely set in a period of mourning, a favorite pastime of the Pfeffermans. This family being what it is, its collective lament takes on various forms of self-pity and narcissism, especially by way of Shelly’s subplot but also with Ari. They can’t let go of Maura’s failure to get them properly and officially bat mitzvahed.

Reactions by Maura's family of choice are kinder toward the character's legacy, and through them Soloway seems to express their own mixed feelings about saying goodbye to their chaotically lovely work. When Lysette's character Shea observes "Maura was a complicated girl...I don’t know what was up her crazy ass kaftans and her f--king magical muu-muus," she might as well be talking about the show itself.

The five stages of grief including an anger chapter, and everyone here skips right ahead to the resentment stage…or maybe they were already there. “We Jews got a painful history that we choose to convey in minor keys,” Shelly croons at a sacred ceremony as a critique, not an endorsement.

Anyway, if you know and love the Pfeffermans, you may forgive the slight nature of the song lyrics and rough choreography; Faith Soloway wrote the songs, but the cast has varying levels of ability to pull off the moves.

There are stand-outs even so, particularly the sultry number by which Kathryn Hahn’s eternally under-appreciated family rabbi Raquel opts out of solving their problems for them. The musical format favors Light perhaps most of all; she isn’t a multiple Tony winner for nothing. And her scenes with actress Shakina Nayfack, who is a sublime presence here, are sensational.

In the galaxy of musical TV episodes, however, this is destined to stand out as one of the small screen’s stranger things.

Less clear is where “Transparent: Musicale Finale” eventually will rank in the pantheon of series finales. It’s bound to have people talking after they’ve gotten over their speechlessness, that’s for sure. And sometimes the smartest way for a remarkable story to end is unforgettably, if not altogether successfully.