The levees, not built for such extreme weather, need to be built to new standards in an era of climate disruption 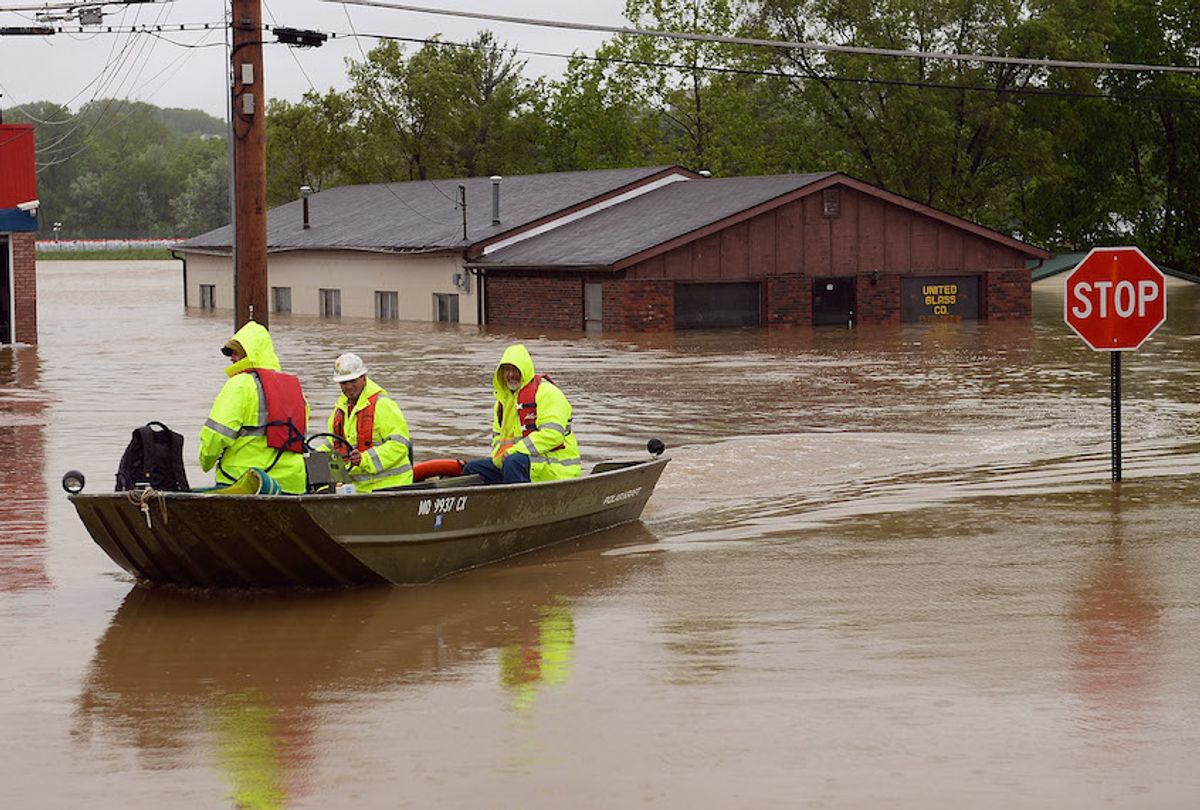 Metropolitan Sewer District workers are seen being boated to shore at the completion of their shift as they monitor the nearby levee along the banks of the Meramec River on May 4, 2017 in Fenton, Missouri. (Michael B. Thomas/Getty Images)
--

Repairs to the levees along the estimated 1,000 miles of the Missouri River and its tributaries that were damaged in torrential flooding in the spring are moving slowly.

The Midwest is vulnerable to more flooding in the years it will take to make at least $1.1 billion in repairs.

“I think if water was running through the White House, there would be a solution,” said John Remus, chief of the Missouri River basin water management division for the U.S. Army Corps of Engineers.

The levees, not built for such extreme weather, need to be built to new standards in an era of climate disruption. That’s because climate scientists warn that what had been 500-year and 100-year storms are more likely to be 20-year and even 5-year events.

Just this month floodwaters broke through two levees in rural Iowa northeast of Omaha, and a 16-mile stretch of Interstate 29 was closed. Iowa Gov. Kim Reynolds issued a disaster proclamation in September for four counties along the Missouri River in western Iowa during the third round of Missouri River flooding this year.

The Corps received 182 requests to repair levees in the Omaha and Kansas City districts. About 50 levees were breached in floods this year compared with five in 2011. The longest break was a 1,000-foot gap in levee L550 south of Hamburg, Iowa.

Historically, flooding was common on the Missouri River with floods up to 17 miles wide. The Corps transformed the 2,341-mile river, building six major dams between 1933 and 1964 to try to control flooding and improve navigation.

That system was not designed to handle extreme floods like the bomb cyclone in March that threatened Gavins Point Damnear Yankton, S.D. Remus ordered the spillways opened to save Gavins Point. About 100,000 cubic feet of water per second, the same as Niagara Falls, poured into the river.

More floods like this year’s are possible. A 2012 report on climate change in the Missouri River basin predicted an average increase each year in upper-basin runoff of about 6% and more than a 10% increase in the lower river by the middle of this century.

Officials in some local districts are frustrated by the bureaucracy involved in repairs. Grant Hansen, the president of the Ames Diking & Drainage District in Nebraska, said he was initially told his district would have to come up with about $450,000 as its 20% match for federal funds before repair work could begin at the levee along the Platte River.

Hansen said the Corps blindsided him by increasing the proposed local match to $750,000 but have since said they might be able to do the repair work for less.

“I just can’t keep asking other agencies to come up with money we don’t have,” Hansen said.

In Spencer, Neb., the rural water district set up a gofundme account to help pay a contractor to put in a new water line.Hundreds of people in Boyd County didn’t have running water for months after the Spencer Dam collapsed.